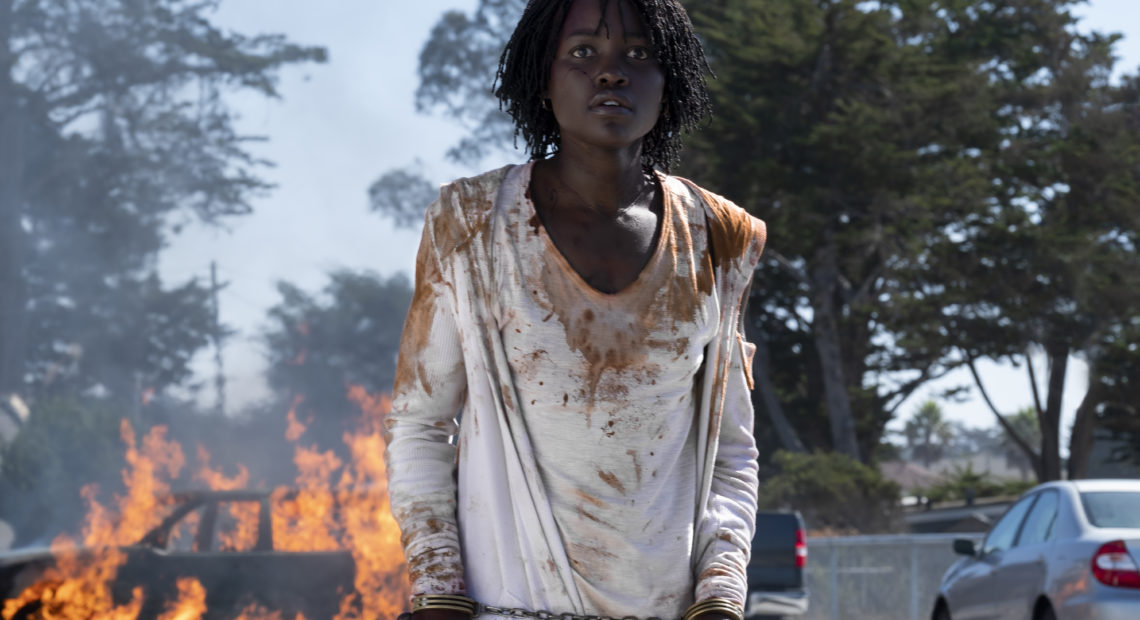 FILM REVIEW: When You Meet The Enemy, And It Is ‘Us’

There’s so much to admire about Us, Jordan Peele’s muscular follow-up to Get Out, that it’s worth appreciating what Peele does when the ebb-and-flow of horror tension reaches low tide. Many of the most celebrated horror maestros are hailed for their big, atmospheric set-pieces, but getting to those moments can often feel like crude narrative patchwork, the listless verses before a killer chorus. Peele excels in these obligatory sections, where his skills as a sketch comedy writer and pop-culture savant can liven up conversations that we’ve been conditioned to expect as the yadda-yadda bridging to nightfall, when a film can finally uncork some suspense and mayhem.

There’s mayhem aplenty to be uncorked in Us, which is as conceptually messy as Get Out was ruthlessly self-contained, but Peele’s quick evolution into a full-service entertainer dispels any fears of a sophomore slump. He can deftly mix-and-match ideas cherry-picked from past classics — the echoing childhood trauma of Don’t Look Now, the alien doppelgängers of Invasion of the Body Snatchers, the masked home-invasion of The Strangers — but he can also handle the banalities of a family car trip to the beach or underscore a gruesome sequence with the theremin whistle of the Beach Boys’ “Good Vibrations.” He’s actively engaged at every moment, which is especially helpful when the film’s bold abstractions start to wriggle away from it a little.

Where Get Out turned a Stepford Wives premise into a bitterly satirical allegory for what it’s like to be black in America, Us opens up to a broader, vaguer, more suggestive diagnosis of social ills, packaged as a metaphysical shocker where the characters are attacked by versions of themselves. Starting with a flashback in 1986, the film opens with young Adelaide Wilson wandering off from a Santa Cruz boardwalk one stormy summer night and entering a hall of mirrors, where she encounters a child that’s her exact reflection—but not. (Think of the famed mirror sequence with Groucho and Harpo Marx in Duck Soup, only utterly bone-chilling.)

Now a grown-up with a husband (Winston Duke) and two children (Evan Alex and Shahadi Wright Joseph) of her own, Adelaide (Lupita Nyong’o) vacations to a secluded home near Santa Cruz and immediately seizes up with panic, as memories of this past trauma bleed insidiously into the present. Seemingly innocuous visual cues land with such a devastating impact that Adelaide pleads with her husband to split town even before a more tangible threat arrives. But as they’re preparing to leave, another family of four arrives on their driveway, dressed in matching red jumpsuits. They also happen to look exactly like they do, making them literally their own worst enemy.

There’s an explanation for this curious phenomenon — a big one, in fact, connected to a network of tunnels cited in the opening titles — but Peele is asking America herself (the Us or U.S. of the title) to look itself in the mirror and consider the destinies of those invisible millions who share our country, but not always our good fortune. The deeper the film goes into accounting for what’s really happening, the less it holds up under scrutiny, both in the logistics of the doppelgängers’ existence and in the abstract themes Peele appears to be exploring. That’s not as damaging to the film as it sounds, but Us plays better as an intuitive experience than a puzzle box where every question has an answer. Peele would rather tease the imagination than tidy things up.

In that respect, Us is a leap forward for Peele as a director, because so much of what he’s trying to express doesn’t make sense on the page, as Get Out did. In a stunning dual performance as Adelaide and her gravel-voiced other, Lupita Nyong’o carries the psychological complexities of a woman whose identity was shattered by an incident over 30 years earlier and who still gets cut by the shards. What’s happening to her is fundamentally inexplicable and unresolvable, so Peele allows that chasm to open up and swallow the rest of the film whole, like a crack in the earth that portends the apocalypse.

It’s also possible to receive Us simply as a gripping home invasion thriller, with Adelaide and her family squaring off against these uncanny, relentless attackers whose origins and motives are a mystery. Though Peele has made it emphatically clear that Us is a horror film, not a comedy — the film itself makes the case just fine on its own, frankly — he seizes the opportunity to lighten up the tone, whether through a funny gesture in the middle of a skirmish or through the casting of Tim Heidecker and Elisabeth Moss as a bourgeois couple who seem to be staging their own version of Who’s Afraid of Virginia Woolf?. Us is a serious film about the American underclass, those who toil out of sight and out of mind. Us is also a lot of fun.