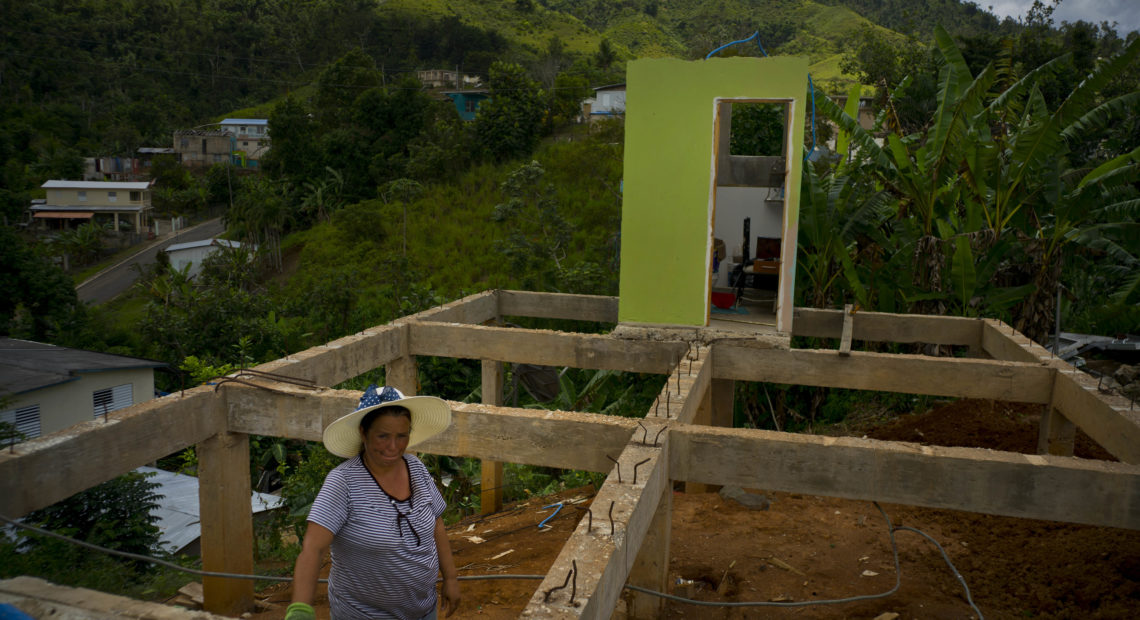 PHOTO: Alma Morales Rosario stands between the beams of her home, in the San Lorenzo neighborhood of Morovis, Puerto Rico, which was being rebuilt in September 2018 after being destroyed by Hurricane Maria. CREDIT: Ramon Espinosa/AP

There are few things Democrats and Republicans in Congress usually agree on, but one of them is rushing federal money to victims of natural disasters.

That sentiment crumbled this week when the Senate failed to advance two separate disaster funding bills. Both included bipartisan funding to help relieve damage across the country from flooding, wildfires, tornadoes and hurricanes. But a fight over assistance for Puerto Rico has derailed getting a deal on the entire package.

The political fight intensified last week after President Trump told Senate Republicans in a closed-door lunch at the Capitol that he would not support sending any additional money to Puerto Rico, according to several people familiar with the conversation. Democrats, who had already been pushing for additional federal resources for Puerto Rico, responded by insisting that any disaster spending bill must help victims no matter where they reside.

“It is the responsibility of the federal government to stand with all American communities in crisis, and we must do so now,” said Vermont Sen. Patrick Leahy, the top Democrat on the Appropriations Committee. “The needs are pressing. The people are waiting.”

Democrats say Trump is refusing to release money to help Puerto Rico continue to rebuild more than a year after a pair of hurricanes devastated the island territory. Republicans say they they will support more food assistance for Puerto Rico and are calling on Democrats not to hold the rest of the bill hostage as they push to add money for other programs.

Senate Appropriations Committee Chairman Richard Shelby, R-Ala., told reporters Tuesday that lawmakers have made virtually no progress on overcoming the impasse. “Right now, where are we?” Shelby asked — and then answering his own question said, “We’re stalled.”

Talks effectively ended on Monday night after the Senate failed to advance either of the two bills.

All but one Democrat, Sen. Doug Jones of Alabama, opposed a procedural vote to begin debate on a $13.5 billion spending package for victims of natural disasters. The GOP-backed plan included $600 million in nutrition assistance for Puerto Rico but left out additional money Democrats say is necessary to aid hurricane recovery on the island, where some residents are still rebuilding homes and basic services, like Internet connections and electricity, have not yet been fully restored. The GOP plan also included resources to address damage from recent floods in the Midwest.

Republicans then blocked a $14 billion alternative supported by Democrats that passed the House in January.

By Tuesday, Democrats blamed the failure entirely on Trump.

“Everything was moving along and guess who came in and messed it up as usual?” Senate Minority Leader Chuck Schumer, D-N.Y., said. “The president.”

Schumer and other Democrats say they could have worked out an agreement with GOP senators if Trump had not ruled out sending additional funding to Puerto Rico.

Trump has said that Puerto Rico is already receiving sufficient money. He tweeted Tuesday that the island territory has benefited from $91 billion, a figure Democrats dispute.

Democrats say that number represents the amount of money Puerto Rico should have access to over the lifetime of their recovery — expected to take decades — not money the island already received. They also argue that Trump administration officials have been slow to process requests for money that Congress already approved.

They are particularly frustrated that administration officials haven’t issued rules and regulations to allow Puerto Rico to spend $28 billion in rebuilding funds for low-income areas that was approved last year. In 2018, the Department of Housing and Urban Development announced plans to allocate nearly $16 billion, including $8.3 billion earmarked for Puerto Rico, but the rules must be issued first, according to a senior Democratic aide.

Democrats say they aren’t willing to budge on their demands, and Republicans are unwilling to negotiate. One option Democrats offered was to pair additional money for Puerto Rico with a larger amount for victims of disasters in the Midwest.

“The president apparently is not amenable to that at the moment,” Shelby said.

The fight is already driving fears that spending negotiators will have a difficult time working together on any spending bills in the future.

“Right now there’s no cooperation,” Shelby said. “I’d like us to work together like we did last year, but right now it seems like there are some impediments.”