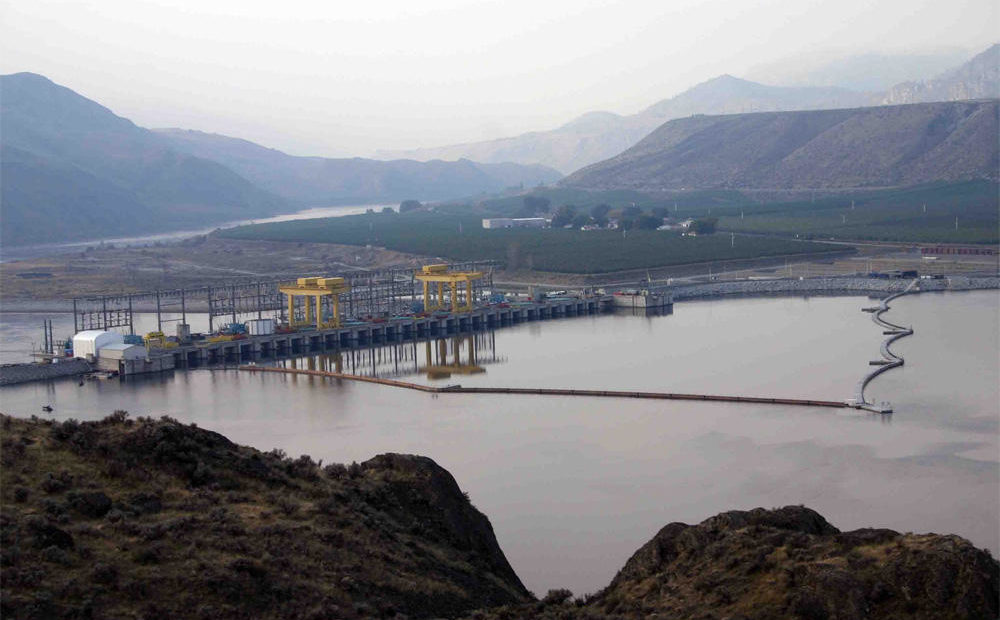 An electric utility in north central Washington wants to branch out into hydrogen fuel production. It would be the first of a group of power companies in the Pacific Northwest to use their dams to make “renewable hydrogen.”

“For around $3 million, we think we can purchase a two to three megawatt electrolyzer as kind of a test project so we can determine if this is economically feasible,” Ivory told a state Senate committee.

Ivory said hydrogen can be used as a vehicle fuel, to augment natural gas and in industrial processes such as oil refining, fertilizer production and electronics manufacturing. One problem is that right now there are no commercial hydrogen fueling stations to sell to in Washington or Oregon.

A Douglas PUD spokeswoman said the utility staff still needs to do some more analysis on the plan before presenting the PUD Commission with a hydrogen production pilot project to green-light. That would be followed by seeking bids for the equipment.

Douglas PUD just won unanimous support from the Washington Legislature to broaden the authority of public utility districts statewide to include hydrogen production and wholesaling. The legislation, to be signed by Gov. Jay Inslee next Wednesday, highlighted the renewable energy credentials of making non-polluting hydrogen fuel with hydropower.

State Sen. Brad Hawkins (R-East Wenatchee) carried the bill for Douglas PUD. Hawkins used to work for the utility before his election to the legislature.

“Hydrogen vehicles definitely have a future in America,” Hawkins told his fellow lawmakers during a bill presentation. “The opportunity for the PUDs to utilize their surplus electricity to produce an emissions-free fuel source is a great thing. It is great for us we believe economically, but we also believe it would be obviously helpful environmentally too.”

A hydrogen fuel cell doesn’t burn anything. It uses a chemical reaction between the hydrogen and oxygen from the air to produce electricity. Hydrogen fuel cell cars are quiet, like battery electric ones, and they emit only water out the exhaust.

Honda, Hyundai, Mercedes and Toyota make hydrogen fuel cell electric vehicles in very limited numbers. The hydrogen-powered 2019 Toyota Mirai is sold only in California and Hawaii to customers who live near a fueling station. The four-seater has a 312-mile range and is quite expensive for a sedan of its size at a base price around $58,500. The hydrogen-powered 2019 Honda Clarity Fuel Cell sedan is available only for lease and only to Californians who live or work near a fueling station.

Portland, Oregon, is home to the recently-formed Renewable Hydrogen Alliancetrade association. Founder and executive director Ken Dragoon said nearly all of the hydrogen currently produced for vehicle fuel and industrial uses in the U.S. is derived from natural gas.

In an interview Wednesday, Dragoon said the prospects for development of a renewable hydrogen industry around the country are probably strongest in the Pacific Northwest because of the availability of surplus hydropower at low prices.

The list of utilities who have joined the new hydrogen trade association include not only Douglas County PUD, but also Tacoma Power, Puget Sound Energy, Eugene Water & Electric Board and NW Natural.

“There are lots of talks going on” about projects, Dragoon said.

Toyota North America is also showing signs of wanting to broaden the market for its hydrogen-powered vehicle by bringing it to trade shows in Portland and giving test rides in Olympia and Salem recently.

Hawkins said he would seek to have hydrogen fueling stations qualify for state subsidies or support if the next session of the legislature votes to accelerate the roll out of electric vehicle charging stations.