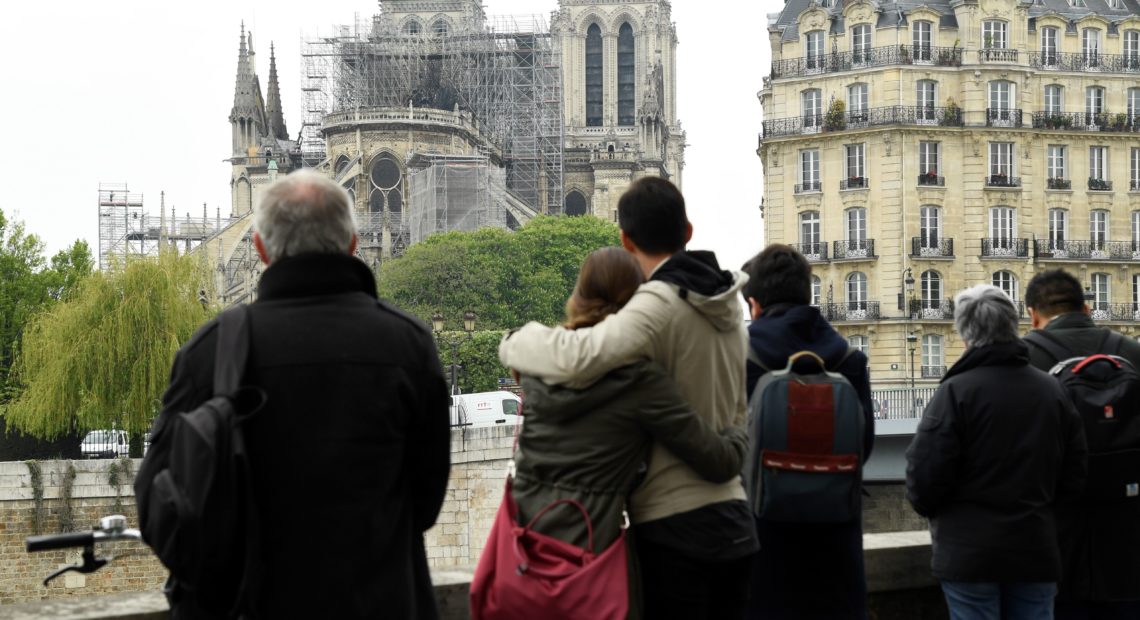 PHOTO: People hug while looking at Notre Dame Cathedral in the aftermath of a fire that devastated the cathedral. CREDIT: Bertrand Guay/AFP/Getty Images

A day after flames leapt through Notre Dame Cathedral in Paris sparking fears the beloved building could be consumed, the structure stood blackened with much of its roof gone, its spire collapsed and charred rubble inside, but it remained standing, its main structure and two towers spared.

The leader of the Catholic Church put into words the duality of the feeling Tuesday: the pain of the loss paired with the promise of rebirth.

“Today we unite in prayer with the people of France, as we wait for the sorrow inflicted by the serious damage to be transformed into hope with reconstruction,” Pope Francis tweeted.

In an address to the nation on Tuesday, President Emmanuel Macron said that Notre Dame will be rebuilt “more beautiful than ever” and that he wants to see it done within five years. “We can do it and we will come together,” he said. 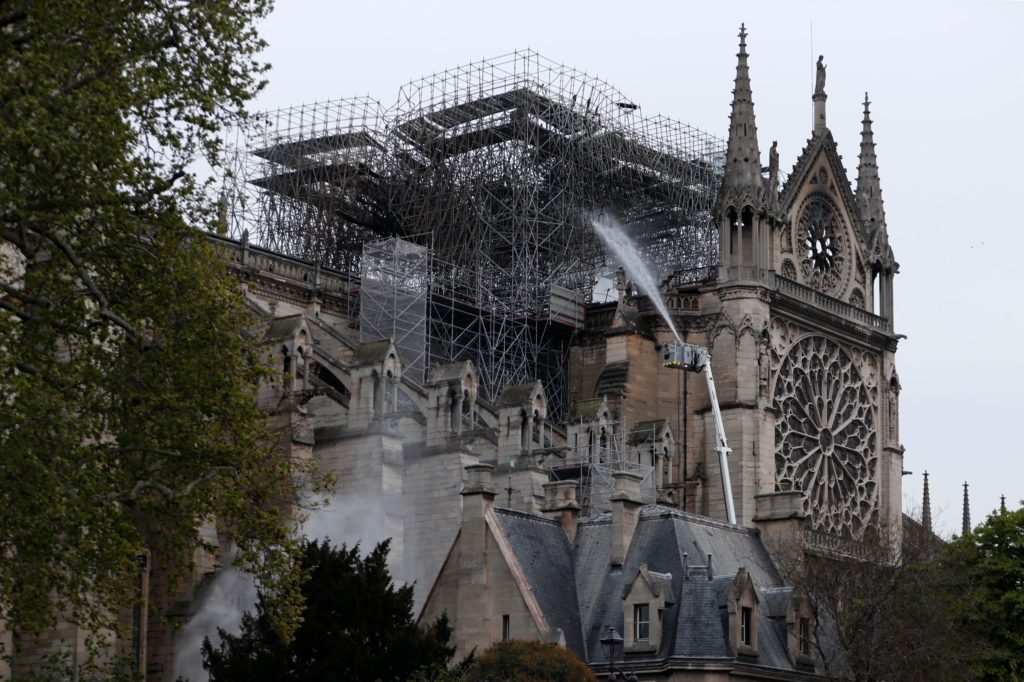 Firefighters spray water as they work to extinguish a fire at Notre-Dame Cathedral in Paris early on Tuesday. A huge fire that devastated Notre Dame Cathedral is “under control”, the Paris fire brigade said after firefighters spent hours battling the flames. CREDIT: Zakaria Abdelkafi/AFP/Getty Images

Junior Interior Minister Laurent Nuñez said while immediate work is needed to secure the building, “the structure is holding up well, despite signs of fragility, necessitating security work.”

Construction first began on the Catholic cathedral in 1163. For 850 years, the house of God was a fixture of the Paris skyline and so it also became a house of man, “part of our French destiny,” as Macron tweeted Monday.

Notre Dame’s destiny was in question through the night as four hundred firefighters worked to put out the blaze. They managed to contain the flames early Tuesday morning local time.

By mid-morning, the fire was fully extinguished and an investigation into the cause began in earnest.

Paris public prosecutor Rémy Heitz told reporters that the fire was discovered in the attic’s framework and is believed to be accidental. Investigators in the early stages of a probe, he said, have detected no signs of arson. But Heitz cautioned the investigation will be “long” and “complex” as dozens of investigators work to uncover what happened. Part of their job is interviewing workers who were engaged in a multi-million-dollar restoration project of the cathedral before the fire broke out around 6 p.m. local time Monday.

Nobody was killed. Officials said two police officers and one firefighter were slightly injured.

But the toll taken on the priceless works of art within the cathedral, including paintings, tapestries, statuary and famed stained-glass windows, could be worse.

A damage assessment is underway with national, local and Church authorities working together, UNESCO said in a statement. Notre Dame was designated a UNESCO World Heritage Site in 1991.

French Minister of Culture Franck Riester said some of the most significant treasures had been saved, including a crown of thorns that Jesus is thought to have worn during crucifixion.

Smoke-damaged paintings were being shipped to the Louvre museum for restoration. Riester said the full resources of the French state were being mobilized in the rehabilitation effort.

In a remarkable boon, workers had already removed 16 religious statues attached to the spire as part of the cathedral’s restoration, the first time in a century the statues had come down, reports The Associated Press.

Built on Île de la Cité in the 4th arrondissement, with its rib vaults and flying buttresses Notre Dame is widely considered to embody the best of French Gothic architecture.

As the centuries have unfurled, Notre Dame has survived other disasters. Even as the monarchy fell, Notre Dame withstood extensive damage inflicted during the French revolution.

And it has drawn visitors in droves. The cathedral says it welcomes 13 million of them a year, an average of 30,000 people a day. 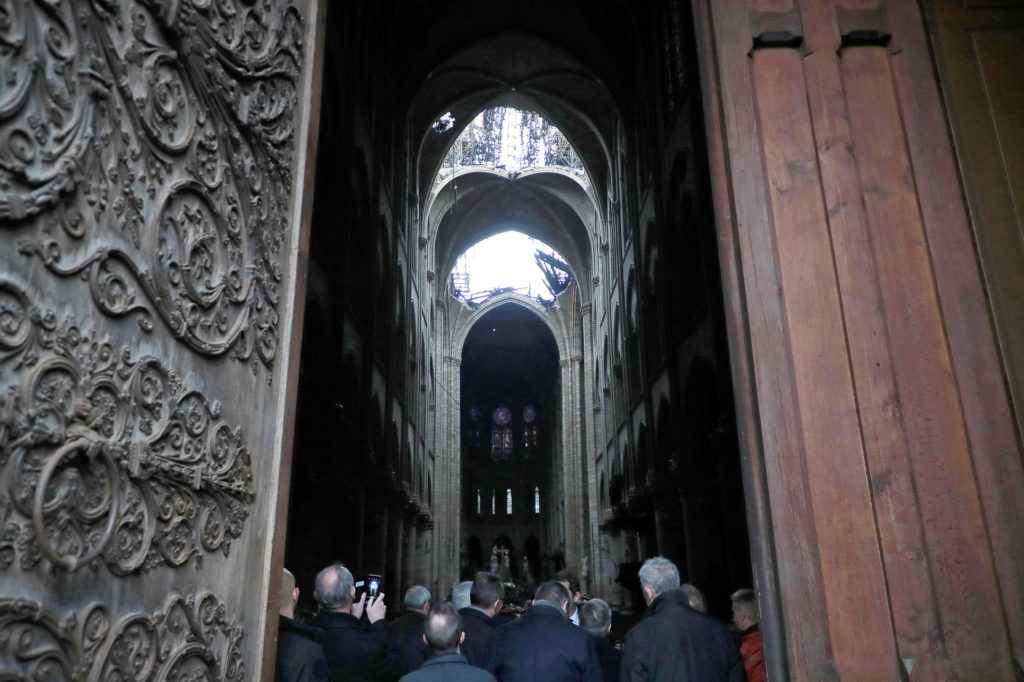 An interior view of the Notre Dame Cathedral in Paris on Monday. Four hundred firefighters worked through the night, battling the flames, managing to contain them by early morning local time and then by mid-morning Tuesday the fire was fully extinguished.
CREDIT: Christophe Petit Tesson/AFP/Getty Images

As people across the world watched stunned and helpless while the cathedral went up in flames, those who had gazed upon it in person posted their personal memories and images on social media.

They have also been invited to contribute to the cathedral’s rebuilding. Several GoFundMe pages have sprung up.

And an international campaign was launched as a central place for donors to contribute.

Hundreds of millions of dollars have already been pledged by some of France’s wealthiest names, including the Bettencourt Meyers family, Bernard Arnault and François Pinault.

European Council President Donald Tusk called on all 28 members of the EU to join in on the effort.

President Trump offered condolences to France, reaffirming the alliance between the two countries.

“We remember with grateful hearts the tolling of Notre Dame’s bells on September 12, 2001, in solemn recognition of the tragic September 11th attacks on American soil,” the White House said in a statement. “Those bells will sound again. We stand with France today and offer our assistance in the rehabilitation of this irreplaceable symbol of Western civilization. Vive la France!”

Macron said in his address Tuesday that the fire can be turned into an opportunity to come together. “We will act and we will succeed.”