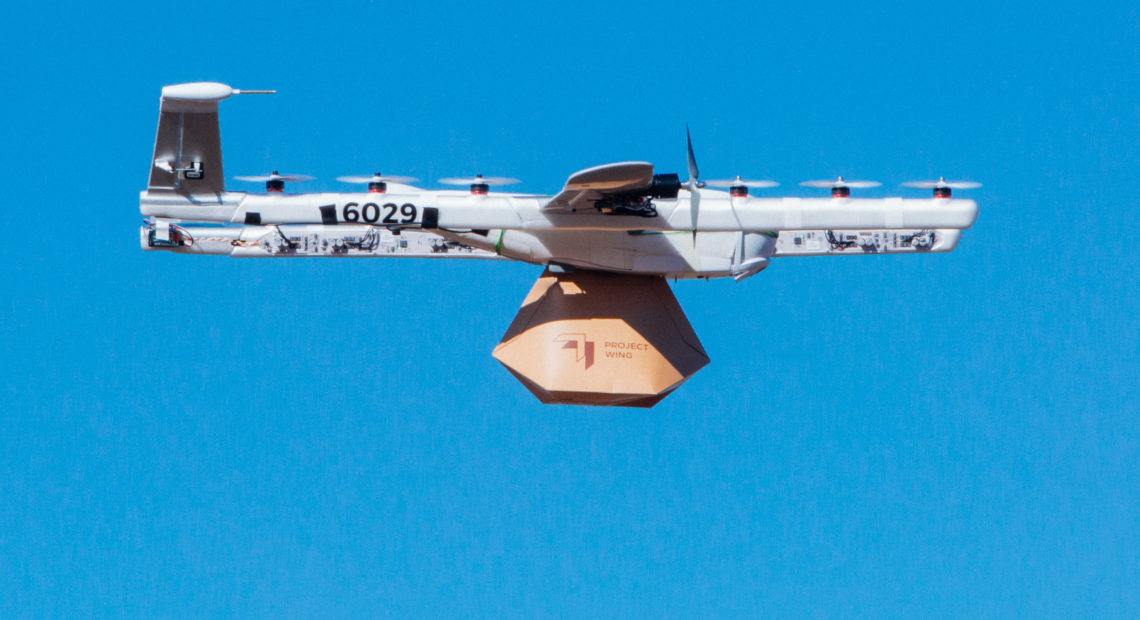 PHOTO: The Wing company, a Google spinoff, has won federal approval to operate its drone delivery system as an airline in the U.S. Wing

The Federal Aviation Administration has certified Alphabet’s Wing Aviation to operate as an airline, in a first for U.S. drone delivery companies. Wing, which began as a Google X project, has been testing its autonomous drones in southwest Virginia and elsewhere.

“Air Carrier Certification means that we can begin a commercial service delivering goods from local businesses to homes in the United States,” Wing said in a statement posted to the Medium website.

The company has touted many advantages of using unmanned drones to deliver packages, from reducing carbon emissions and road congestion to increasing connections between communities and local businesses.

“This is an important step forward for the safe testing and integration of drones into our economy. Safety continues to be our Number One priority as this technology continues to develop and realize its full potential,” Secretary of Transportation Elaine L. Chao said in a statement from the agency.

In a statement to NPR, the FAA says Wing was able to qualify for an air carrier certificate because it has shown “its operations met the FAA’s rigorous safety requirements.”

Wing’s electric drones are powered by 14 propellers, nearly all of which are top-mounted to help carry loads of up to 1.5 kilograms (3.3 pounds). They’re meant to deliver a wide range of everyday items, from food and drinks to medicine and emergency supplies.

By developing delivery drones — and a retail system that would connect customers with local merchants — Google’s parent company is directly competing with Amazon, which has been readying its own unmanned delivery system, called Prime Air.

As early as 2013, Amazon CEO Jeff Bezos predicted that the online retail giant’s “octocopter” drones would start buzzing out of fulfillment centers in the coming years. At the time, Bezos said his company’s drones would be built to carry around 5 pounds — a weight limit that would allow about 85 percent of the products sold by Amazon to be delivered by drone.

But Bezos also said it would take time to develop a safe and reliable drone system — and to get federal approvals. It wasn’t until late 2016 that Amazon announced its first fully autonomous Prime Air delivery. Since then, like Google, it’s been testing its delivery drones.

The use of unmanned aircraft in the U.S. has been growing by leaps and bounds. At the end of 2018, The Associated Press reported that “110,000 commercial drones are operating in U.S. airspace,” citing government figures that also projected the number would more than quadruple in 2022.

Wing has been testing its drone delivery systems from an FAA-approved test area at Virginia Tech since the autumn of 2016. With its new air carrier certification in hand, the company says it hopes to expand deliveries in southwest Virginia, recruiting businesses and potential customers in the Blacksburg and Christiansburg areas who want to try out the delivery system.

That expansion is planned for later this year. In the meantime, Wing “will begin its first trial in Europe in the spring, delivering to homes in Helsinki, Finland,” a company representative said in an email to NPR.

Some of the earliest Wing drone tests took place in Canberra, Australia, in 2014. Since then, the company says, its drones have flown more than 70,000 test flights and delivered thousands of packages there.

Earlier this month, Wing officially launched its commercial delivery service in northern Canberra after gaining regulatory approval. Its initial partners in that venture range from local coffee, bakery and gelato shops to chocolate makers and a taqueria.

In addition to Google and Amazon, delivery companies such as United Parcel Service and DHL Express also have been developing their own drone systems. And like many human endeavors that rely on technology, a main hurdle has been a relatively simple constraint: battery life.

“If you have to recharge them every other hour, then you need so many drones, and you have to orchestrate that. So good luck with that,” Frank Appel, the CEO of DHL parent Deutsche Post AG, told the AP last December.