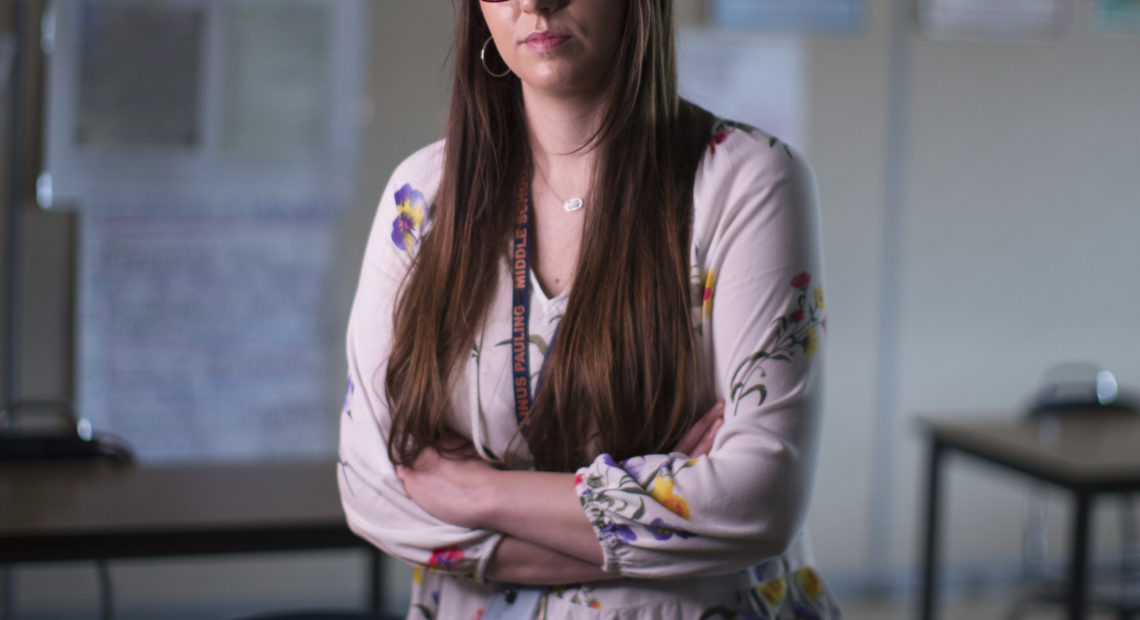 Nearly 2,300 teachers have just had a mountain of student loan debt lifted off their backs, according to previously unreleased figures from the U.S. Department of Education. The move follows reporting by NPR that exposed a nightmare for public school teachers across the country.

In exchange for agreeing to work in low-income schools, aspiring teachers could get federal Teacher Education Assistance for College and Higher Education (TEACH) Grants from the department to help pay their way through college. But those grants were often unfairly turned into loans that teachers had to pay back. 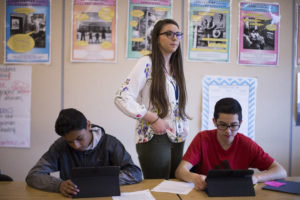 Victoria Libsack, a teacher at Linus Pauling Middle School in Corvallis, Ore., with students Alan Gallardo, 14, (right) and Victor Hernandez, 14. Libsack taught for three years in a low-income Phoenix school. But after her TEACH Grants were converted into more than $20,000 in loans, she took a job at a school that doesn’t meet TEACH requirements.
Beth Nakamura for NPR

In December, the Education Department proposed a fix. Now, that fix has been expanded, and thousands more teachers are likely to get help.

“We’ve put teachers who didn’t deserve this stress, this pressure, this financial burden in a position that is frightening and confusing,” says Education Department acting undersecretary and acting assistant secretary Diane Auer Jones. “I can’t give them back those years, and I can’t take away the gray hairs and I can’t take away the stress. It seems like a small thing to do to say, ‘I’m sorry,’ but I’m very sorry. And we want to work to fix it and correct it.”

Kaitlyn McCollum is one of the teachers who lost her grant money unfairly and, like many of them, her story began with a letter that sent her reeling.

Two years ago, the high school teacher in Columbia, Tenn., walked to the mailbox, pregnant with her first child, and opened an official-looking letter from the Education Department.

Her federal TEACH Grants had been turned into more than $20,000 in loans. The reason: McCollum had narrowly missed a deadline for mailing in some annual paperwork.

She walked inside, sat at the family table beside her husband, A.J., and sobbed.

Not only was this sudden, crushing debt unfair, McCollum later argued to the Education Department, she couldn’t afford to pay it on her meager teacher’s salary. And she didn’t understand why the department wouldn’t turn the loans back into grants since she could prove she was teaching, just as she’d promised. She appealed but was told her loans could not possibly be turned back into grants.

McCollum was not alone. NPR’s reporting over the past year found that the same thing was happening to thousands of other public school teachers.

The problem at the heart of the TEACH Grant story is that small paperwork issues often triggered this catastrophic consequence. In order to qualify for a grant, aspiring teachers agreed to teach for four years in a low-income public school. But the rules also required that teachers send in a form every year to prove they were actually teaching.

The forms were often due over the summer when teachers and principals, who had to sign them, were away on vacation. And if teachers sent in this annual form even one day late, missing a signature or date, or with any other little problem, their TEACH Grants would be turned into loans, with interest. And this process was irreversible. Teachers were told their loans could not be converted back to grants.

For two years, the debt haunted McCollum and her young family. They went into forbearance — a brief reprieve but with interest accruing. They even moved to a smaller, less expensive house to prepare for what now seemed inevitable. No one was listening. Fair or not, the debt was growing and would need to be repaid.

And then, just a few Saturdays ago, another letter arrived in the mail. McCollum opened it in the car, her husband driving, their young son Louther chirping in the back seat. A much-needed spring break vacation lay ahead.

“Do you see that word, ‘Congratulations!’?” McCollum said, smiled and laughed. It was official: That debt, now $24,000, had finally been turned back into grants.

“Two years of us fighting this,” McCollum said. “We won,” she tells NPR. “We raised our voices and they finally heard us. Disbelief followed by a relief like I have not felt before.” 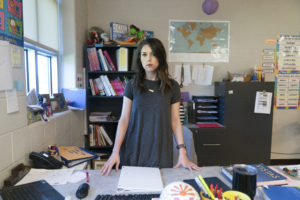 Kaitlyn McCollum teaches at Columbia Central High School in Tennessee. After being told her TEACH Grant paperwork was late, her grants were converted to loans. “I remember going out to the mailbox — I even opened it up at the mailbox — and sheer panic just set in,” she says.
Stacy Kranitz for NPR

Scale Of The Problem (And The Fix)

The federal TEACH Grant program was created in 2007 with the best of intentions: to help aspiring teachers, who committed to teach high-need subjects in low-income schools, pay for college. And the program succeeded in attracting bright young teachers to work in some of the nation’s most underserved schools. According to the most recent data, roughly 21,000 teachers have successfully completed the program’s four-year teaching requirement.

But that compares to 94,000 recipients who have had their grants turned into loans. Many of those conversions were justified — young students who later decided teaching was not for them and didn’t complete their required service. But many others were undoubtedly like Kaitlyn McCollum: They have taught as promised but were trapped in the program’s administrative quicksand.

In December, after multiple NPR reports on the depth of the TEACH Grant problem, the Education Department announced it would offer relief for any teacher who could prove they had fulfilled — or could still fulfill — their teaching service. Grants that had unfairly become loans because of these minor paperwork problems would, at last, become grants again. The irreversible became reversible.

“From internal reports, from the work that [NPR] did, it was abundantly clear to us that there was a problem with TEACH Grants,” says the Education Department’s Jones, who served in the same role in 2007, when the TEACH rules were first written. “We realized that there were certain things that seemed like a good idea when we wrote the [regulation], but they were just too cumbersome for students. And unfairly so.”

The number of teachers getting help is likely to rise. According to the department, since it rolled out its fix in January nearly 6,000 teachers have applied for relief. So far, nearly 2,300 have been approved for the fix and are getting their loans turned back into grants and fewer than 20 teachers have been denied. In short, the vast majority of teachers who apply for the fix are getting their grants back.

In addition to the department’s current relief efforts, advocates have also pushed for an overhaul of the TEACH Grant’s rules. That process, known as negotiated rulemaking, recently concluded with something of a surprise: The department agreed to expand its fix to reach even more teachers and to make the program much easier to navigate.

Once these new rules go into effect, TEACH Grants can no longer be turned into loans just because of late or incomplete annual paperwork. So that draconian penalty for such a small infraction will disappear.

The department is also committing to help teachers who had their credit hurt when they defaulted on these loans.

But hanging over this process has been one thorny question: what to do about teachers who lost their grants and, as a result, decided to change schools or quit teaching altogether. In other words, they lost their grants, were told there was nothing they could do, and so they moved on with their lives.

“On the phone, honestly, I cried at one point. [Because] I was like, this isn’t right. You know, it’s not fair,” remembers Victoria Libsack, who taught for three years in a low-income Phoenix school. But after she narrowly missed a paperwork deadline and her grants were converted to loans, Libsack eventually moved to a different state and took a job at a school that doesn’t meet TEACH requirements.

The problem for Libsack and teachers like her is that the program requires four years of teaching within an eight-year window. Even with the department’s initial fix, Libsack would have very little time to quit her current job, potentially move again, and find a new job in a qualifying school to complete her required service. And some teachers have no time left at all.

In February, Libsack flew to Washington, D.C., to share her story with the government committee that has been tasked with rewriting the rules.

“Living on a teacher’s salary at a low-income school, I had just enough to live,” Libsack told the committee. “I loved teaching, but I felt overwhelmed and defeated when my TEACH Grant was converted.”

That rules committee heard Libsack and voted to expand the department’s fix to include teachers like her. They agreed to go back and pause the eight-year clock at the time when a teacher’s grants were first converted.

For Libsack, that means she should now have five more years to complete her final year of service. She’ll still need to change schools to qualify. That’s not ideal, she says, but it will mean she won’t have to pay upward of $20,000 in loans. Libsack says she’s now feeling “hopeful” because her government finally listened.

“For me, as a teacher, it’s awesome,” she says, “because then I can convey that to the students and say, ‘Hey, you do have a voice. You are citizens. You do have a role in our government.’ ”

The department’s fix has not been entirely smooth. Many teachers have told NPR that some call-center staff seemed unfamiliar with the new rules — and that the paperwork they were sent, even after they got approved, was really confusing.

Some advocates argue the department should do even more for teachers like Libsack. Patrick Llewellyn, an attorney at Public Citizen Litigation Group, says the government should be more flexible with teachers who lost their grants unfairly many years ago. He says it should reduce the number of years they’re required to teach in order to satisfy the program’s requirements and keep their grants.

“For people who were converted eight, nine, 10 years ago, it is a lot to ask of them [to quit their current job and find another one] if they are doing something completely different,” Llewellyn says, especially since they are in this position because of how the program has been mishandled.

But on this point the department is holding firm with the original terms of the deal: Teachers have to teach for four years.

Perhaps the biggest challenge remaining for the Education Department is one of outreach and communication.

“There is relief available for teachers,” says Llewellyn, “but they need to know about it.”

Some teachers who were hit with these unfair debts still may not realize they qualify to have them forgiven or refunded if they’ve already paid them. Many have changed addresses, both physical and email, and may be difficult to find. The department says it is reaching out, to make sure those who need the help know that it’s finally there. It also encourages any teachers who think they might qualify to proactively ask for help.