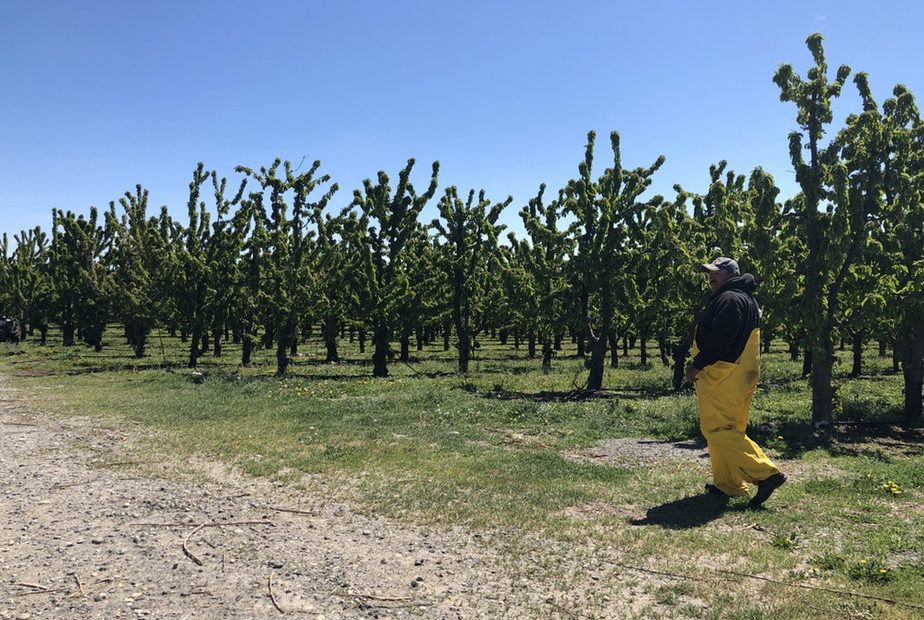 This story is a collaboration between the Northwest News Network, KUOW Seattle and Northwest Public Broadcasting.

We roll up a long, gravel road about 20 miles outside Mattawa, a small farming town in central Washington state.

We’re on the King Fuji Ranch where there’s four suspected cases of the mumps and over a 100 exposed workers quarantined.

It’s massive. Rows of wine grapes and apples surround us. In a gated section, there are 16 houses painted the same shade of beige. That’s where over 100 farmworkers live and are currently quarantined with the mumps — a contagious illness that causes a rash, puffy jaw, and swollen testes and ovaries.

These workers came on the federal H2A visa program. They’re temporary farm labor, mostly from Latin America, many from Mexico. 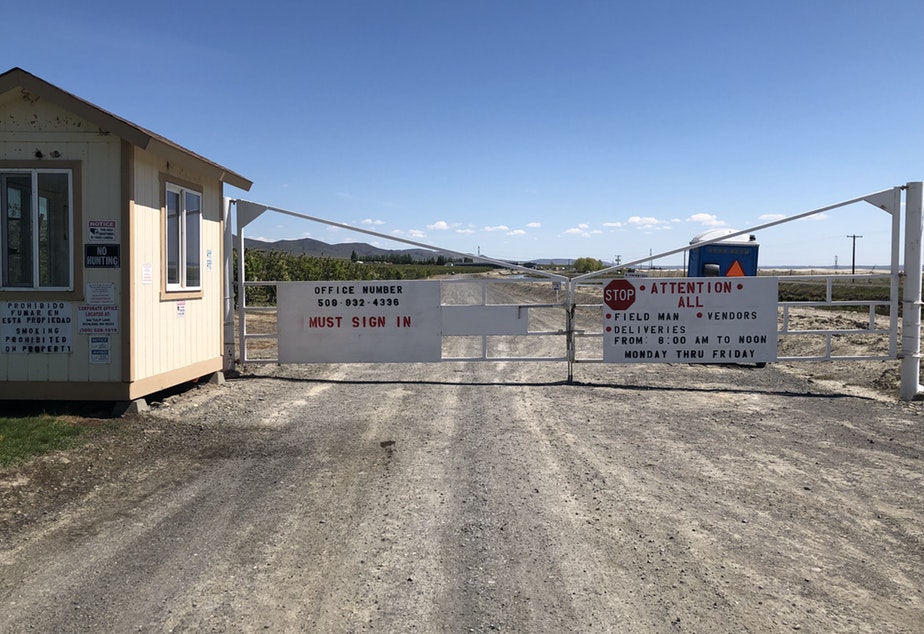 A barricade and a guard shack mark the entrance to King Fuji Ranch outside of the farming town of Mattawa, in central Washington. More than 100 foreign workers have been quarantined for the mumps there. CREDIT: ANNA KING/N3

And for next several weeks, they will be quarantined, as health officials have highly discouraged them from going into town for food or supplies.

H2A workers tend to be pretty isolated already. Housing is often tucked away in the orchards, away from towns, and getting sick can complicate things. Farmworker advocates criticize the H2A program can leave workers vulnerable — they have limited transportation off their worksite. And few ways to complain.

We couldn’t talk to any of the workers on the King Fuji Ranch … or get past the locked metal gates, guard shack and large, barking dogs. A women near the entrance referred us to a manager named Nathan, who did respond over email but didn’t answer many questions.

So we went to find somebody who could.

Theresa Adkinson at the Grant County Health District, in Moses Lake, wasn’t worried when she got the first call.

“Four cases? We can manage that,” she said.

“But 150? Are we going to have to call in additional support?”

Adkinson and her team coordinated a mass vaccination for over a hundred workers at King Fuji Ranch. Nobody refused the vaccine. If they did, they couldn’t work.

Adkinson said it’s kind of good the workers are secluded, because it makes them easy to quarantine.

The exposed workers are now stuck on the farm until the disease passes. It’s a long period of isolation, which makes it hard for the workers to send money home or buy their favorite snacks.

In town, we learn that news of the mumps outbreak hasn’t spread here. We stop outside Estudillo’s Food Store, where an H2A worker from a different ranch recalls with a grimace when he had las paperas — mumps — as a kid in Mexico.

Twice a week, he comes with his coworkers in a loaded company van to shop for water, smokes, and Cokes.

Another worker named Francisco Garcia Valdez, says he misses his family but also the food back home. The tortillas here don’t taste the same, he says in Spanish. But he understands what he signed up for: “Venimos a trabajar, no vacacionar.” We came to work, not to vacation, he says.

Workers like Garcia Valdez, and hundreds more, make up this temporary workforce.

In a way, Mattawa is almost like a tourist town. Its population grows dramatically every spring and summer. But the bump is from foreign workers, who labor alongside the locals. 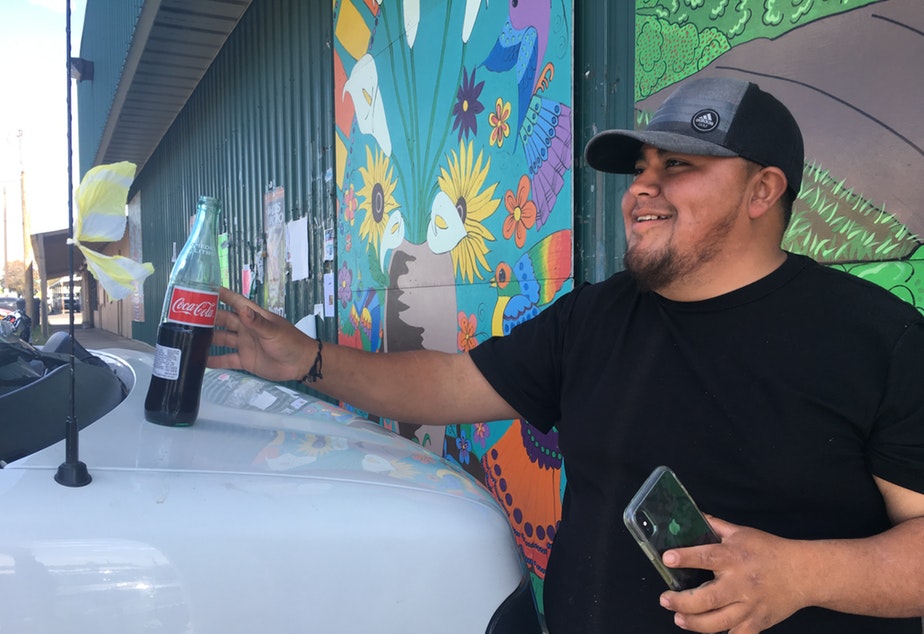 An H2A farmworker takes a moment to enjoy a coke outside of El Estudillo Food Store. H2A foreign farmworkers are allowed to drive into town for a couple of hours to get supplies — usually on Wednesdays and Fridays. CREDIT: ESMY JIMENEZ

Grocery stores like Estudillo’s are one place where the H2As and the local workers mix together, and where you can see the ripple effect of this mini population boom. Locals say the checkout lines get longer. The price of gas and fruit goes up.

While this spring brings these cases of the mumps, it’s not clear yet how the outbreak started. Wafla, one of main companies that brings in H2A workers to Washington, tells us vaccination records are not part of the required paperwork. And this is the first case they’ve had like this. Other labor experts point out that vaccination rates in Mexico are also pretty comparable to the U.S.

Dana Fox, with the Mattawa Community Medical Clinic, says locals aren’t at a high risk for this outbreak and generally. “The Hispanic population is amazing when it comes to immunization,” she says. “They’ll bring that poor baby on their first birthday, because it’s time to get their immunization.’”

The H2A workers are viewed as outsiders here. The locals call them contratados, the contract workers. They’re mostly men, usually 18 to 30 years old.

Down the street, Wednesday night Catholic mass takes place at Our Lady of the Desert Parish. More workers have come here in these last few days.

Sergio Rodriguez sits in a sunny rose garden as kids play in the grass. He’s a local who works alongside the hired labor. He likes when the H2A workers come into town because it forces employers to bump up wages for everyone.”

When they arrive, they give us a dollar raise,” Rodriguez says in Spanish. “It’s better for us.” 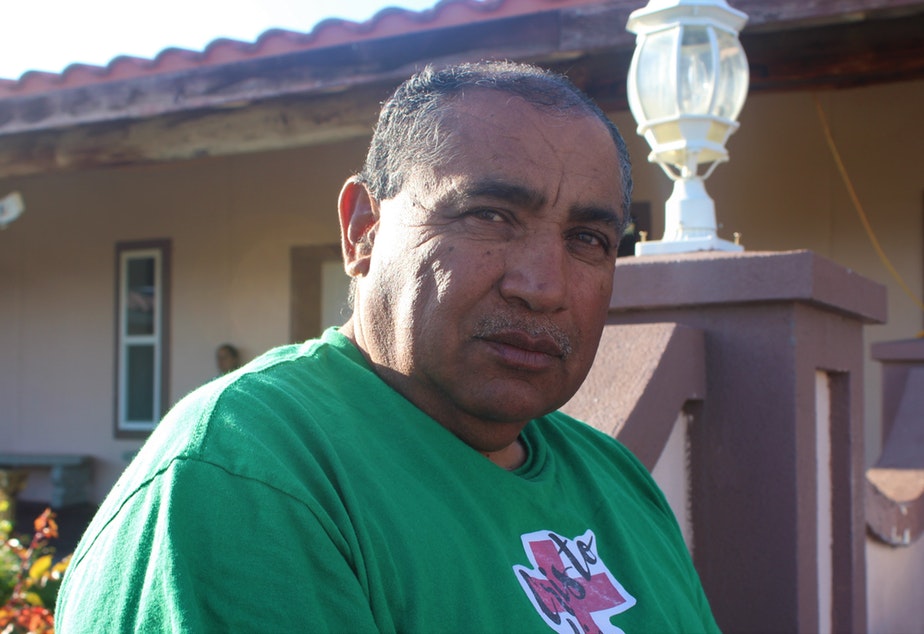 Sergio Rodriguez sits in the warm spring sunlight outside of the Our Lady of the Desert Parish catholic church in Mattawa. He says the workers help raise local wages about a dollar when they come to town, but they also get to take more of their paycheck home.
CREDIT: ESMY JIMENEZ/KUOW

But Rodriguez gripes that the contratados get to keep their entire paycheck — no taxes are taken out. And they get free, sometimes new housing. But they don’t pay for local infrastructure — roads, utilities and schools. That’s not their gig, they’re not a permanent part of the community.

Down the hill from the church, Wendy Lopez shows us around some new H2A worker housing.

For many H2As it’s their first time leaving their hometowns. Lopez says her role is like being the big sister to hundreds of workers.

She has local police give the workers a basic orientation with tips like: use the crosswalks, lock up your belongings, don’t drink in public.

Lopez also makes sure they know how to use modern bathrooms. Like teaching a 19-year-old how to turn on the hot water.

In a tiny flower shop called Rosa’s Boutique, 3-year-old Stephanie Medina darts between the coolers and the glass shelves of perfume and gifts. 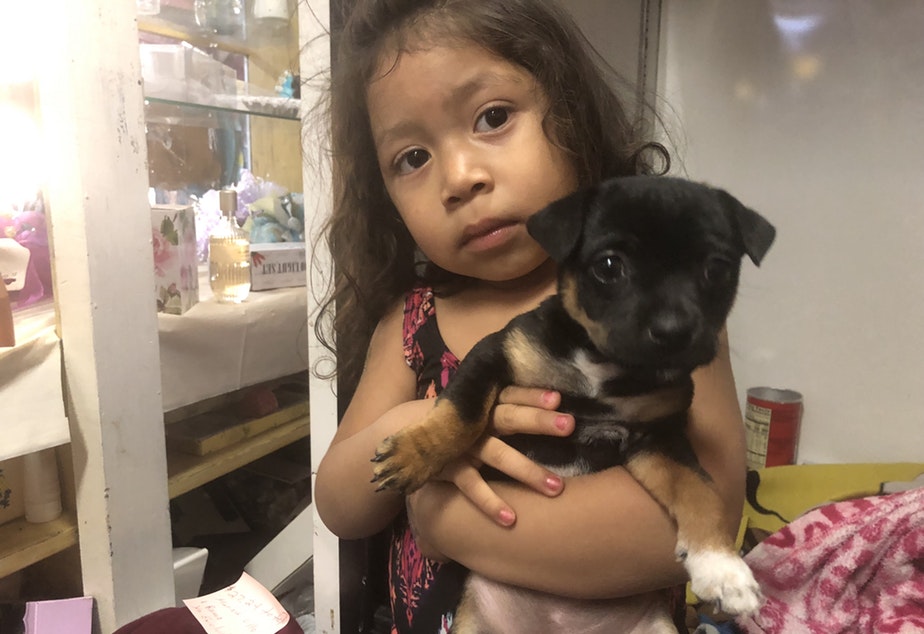 Three-year-old Stephanie Medina Sanchez squeezes her Chihuahua puppy. She’s the granddaughter of a local flower shop owner in Mattawa. Her mother says the farmworkers often come in to buy flowers, but the young men are lonely for their families back in Mexico. CREDIT: ANNA KING/N3

Her mother, Jacky Medina has come to know many of these H2A workers. The single guys buy flowers for the local girls they try to date. She sees the workers as hard working men, a catch.

“I don’t judge on if they are the dirtiest or the cleanest person in the world,” she says. “As long as they treat me and my daughter right — that’s it.”

These contratados will never be a full part of this community. They’re strange neighbors. But this is the time to watch and wait. It could be weeks before the mumps is declared over and the quarantine lifts for all these workers.

Just outside of town in the shadow of Sentinel Gap, an irrigation pivot line ticks, ticks down the time. 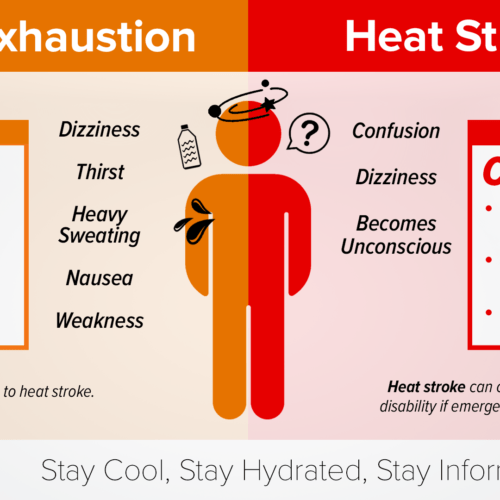 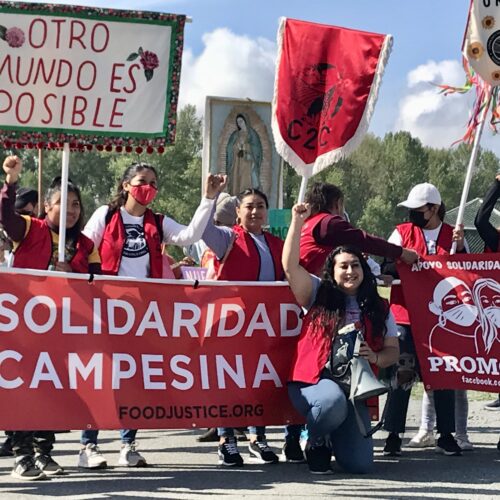