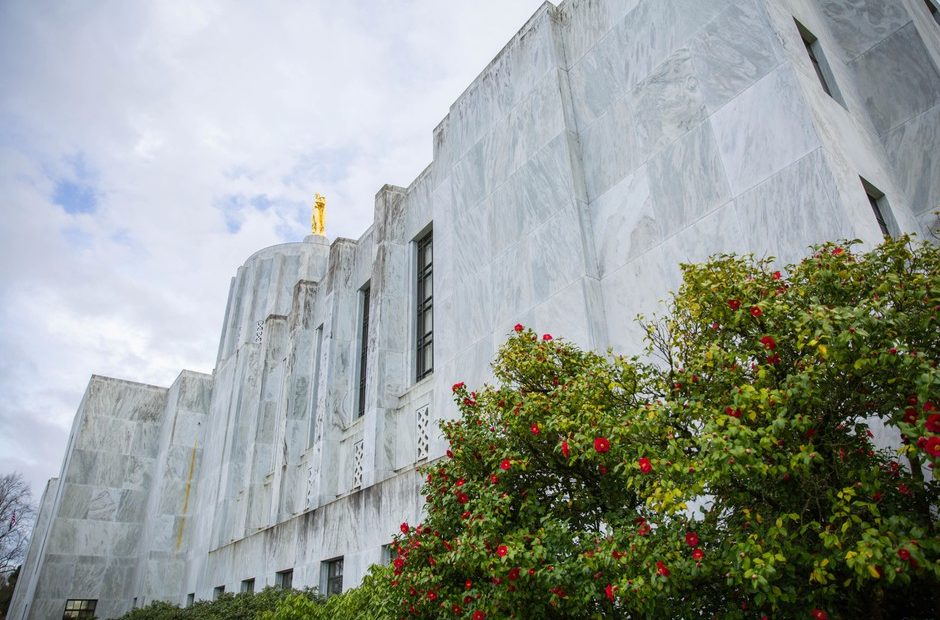 Oregon Senate Republicans Have Literally Left The Building. How Do They Come Back?

Imagine the scene Democrats had created for themselves this past week.

Legislative leaders were poised to pass a $2 billion school funding package into law a day before teachers across Oregon converged on the statehouse to demand more support. There were talks of having Gov. Kate Brown appear in front of the state Capitol to sign the bill while a throng of teachers and their supporters celebrated if everything went according to plan.

It would have been the perfect photo opportunity for Oregon Democrats.

Brown’s party knew it. And so did Republicans.

But GOP senators, solidly in the minority, left the Capitol this week before lawmakers could approve House Bill 3427, which would inject schools with billions in new funding to lower class sizes and boost graduation rates. The move denied Democrats a 20-member quorum, halting business in the Senate.

In that respect, the boycott has achieved Republicans’ objectives: slowing passage of a tax mechanism they say has been sped through and highlighting their demand that Democrats focus on the state’s unwieldy pension systembefore finding more cash for education. They succeeded in denying Brown and other Democratic leaders that picture-perfect moment heading into the 2020 campaigns.

What comes next is far less clear.

Republicans now must navigate how to gracefully return to the state Capitol while ensuring their walkout accomplishes something, at least in the eyes of voters. In their quest to do so, they have put forth a changing list of objectives in daily discussions with Brown and Senate President Peter Courtney, D-Salem — from technical fixes to the tax plan to modifying high-profile bills on completely unrelated topics.

“Republicans are so outnumbered, one of the things they have done well is make themselves relevant,” said Atkinson, whose Senate tenure included 2001, when House Democrats staged a similar walkout. “The only thing Republicans have to make their voice heard is deny a quorum.”

But by Friday morning, as Republicans denied the Senate a quorum for the fourth straight day, any progress was hard to discern.

“I’m not ready to talk about anything,” said Senate Minority Leader Herman Baertschiger Jr., R-Grants Pass. “You’re just going to have to give us a little more space.”

Initially, Republicans’ plan appeared to focus on the ballooning debt of the Public Employees Retirement System, known as PERS.

Without addressing that $27 billion liability, they argued, any new money for school children was at risk of winding up covering pension costs rather than helping Oregon classroom performance. Huge signs reading “REAL PERS REFORM NOW” sat on the desks of the Senate’s 12 Republicans on Tuesday, the first day they denied Democrats a quorum.

More recently, the message has appeared more muddled to outsiders.

In their insistence on having their voice heard by Democratic supermajorities, Republicans have brought a wide array of policy proposals into the standoff.

A list Republicans submitted to Democrats early in the week called on them to kill a bill tightening the state’s gun laws and send the school funding bill back to committee for technical fixes. Republicans have raised the idea of adding a constitutional amendment to the tax bill requiring the revenue be spent on K-12 schools. Bills dealing with vaccines and a proposed cap-and-trade system aimed at fighting climate change were also in Republican sights. 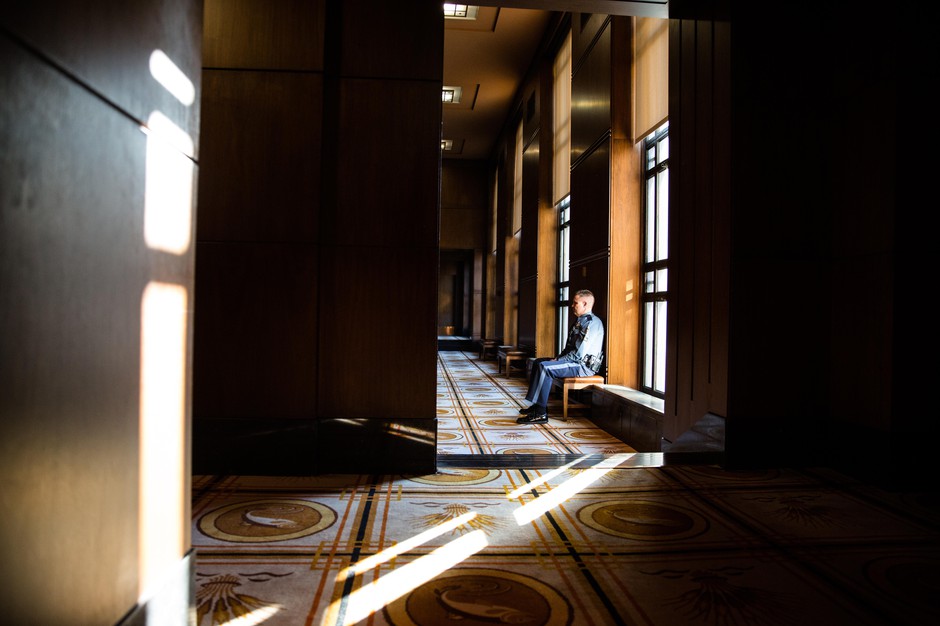 With that strategy, Atkinson added, “they won’t win.”

In a meeting with reporters this week, Courtney drew few bright lines in how he viewed those demands. One certainty he offered: The school funding bill is not up for negotiation, and they will not send it back to committee.

“I know that’s one of the requests, but I’m saying, ‘Come on,’” Courtney said. “That is a major, monumental way to fund, finally, early childhood programs … as well as K-12. A bill its size has never had such a full and complete airing.”

Less clear were the lengths Courtney would go to to placate Republicans — and how that might sit with Democrats who insist the GOP should not be rewarded for what they believe is bad behavior. The Senate president would not discuss what policy proposals were on the table, and both he and Baertschiger have described negotiations as fluid.

But Republicans will likely need something tangible in exchange for returning to the Capitol, and agreeing not to stage further walkouts.

Baertschiger on Friday dismissed any suggestion that Republicans walked out without a clear exit strategy .

“They’re just pulling things out of the air,” he said. “The caucus was in full agreement when we did this. The strategy and everything — it was all agreed on.”

A day earlier, Baertschiger didn’t offer many specifics when asked for the outcome he is holding out for.

He then offered a list: “That there are some technical fixes in [the school funding] bill and that we have some sort of real PERS fix, and hopefully there’s some legislation that needs to go bye bye.”

A boycott by lawmakers in the minority party is no longer the rarity it once was. The tactic has now been used at least four times since 2001.

Senate President Courtney recently described the strategy as “government shutdown lite,” lumping it in with other delay tactics such as forcing Democrats to read bills in full before a vote. (That’s how House Republicans responded to the $2 billion business tax package just a week earlier, requiring the House clerk to spend two and a half hours reading the text out loud before it was approved.)

“This has become the new norm,” Courtney said. “It’s just a way to slow things down or stop things, et cetera.”

But in 2001, when then-House Minority Leader Dan Gardner led his Democratic caucus on a five-day boycott, the strategy hadn’t been used in decades. So when Democrats revealed they wouldn’t be showing up to work, pressure mounted quickly.

“It was crazy,” Gardner told OPB. “It was unbelievable. I remember [then-Gov. John] Kitzhaber and I talking about it. He said, ‘Lot of pressure on you?’ I said, ‘Oh my god.’”

That year, the timetable Gardner and his members faced was straightforward. The Republican majority was hoping to pass a plan for redrawing House districts in such a way that Kitzhaber, a Democrat, wouldn’t need to sign off. But by denying Republicans a quorum for five days, Democrats were able to wait out a legislative deadline that would have allowed that maneuver. They returned to work once the idea was dead.

“A walkout is a very drastic measure,” Atkinson said. “In the case of the Democrats, their ability to stay united on redistricting was very focused. They were willing to suffer the short-term PR consequences for the longer-term ability to redraw districts.”

This year, Senate Republicans don’t have a clear deadline they need to meet, and their timetable appears to be less regimented. Asked Thursday if he was optimistic his members would be back in the building on Monday, Baertschiger replied: “I was optimistic we’d have been back Wednesday.”

Gardner said walkouts grow more difficult to control with each passing day. He described remaining at the Capitol to try to negotiate a deal while the rest of his caucus stayed away in 2001.

“It’s harder after a while to hold all your members who are staying out together,” he said. “I had 24 members we’d sent to the hinterlands. I had to talk to them twice a day on conference calls to make sure they knew what was going on and so they didn’t feel left out of things.”

One thing Democrats knew they weren’t facing in 2001? Being rounded up by Oregon State Police on the orders of the governor, a fellow Democrat.

“We never considered going across state lines because we knew the governor would not send the state police after people,” Gardner said. “When we had John’s word on that? No.”

Republican senators had no such assurances in 2007, when they denied a quorum to majority Democrats to block a bill. According to news reports from the time, Courtney asked then-Gov. Ted Kulongoski to send state police to round up Republicans. Troopers found two of them at an Oregon State University baseball game, but the stalemate ended before they were pulled back to the Capitol.

Courtney has said he dislikes using police in such matters, but he notably didn’t rule out asking Gov. Kate Brown to do so when asked by reporters Wednesday.

“That’s easy to talk about. It is very sad if that ever has to happen,” Courtney said. “State troopers are our ultimate police force and we need them in areas that are much more important than that to go running around looking for state senators.”

In the end, the most important question about the current standoff may not be how it concludes, but what impression it leaves on a legislative session that will still hold plenty of opportunities for conflict. The Legislature must adjourn by the end of June, with plenty of contentious bills still left to debate.

Though he didn’t say much about it this week, that consideration is undoubtedly on Courtney’s mind.

“Human beings don’t just come back like nothing happened,” he said. “I am worried about, when we return to the floor, how much this is going to impact our relationships. You’ve still got to work together.” 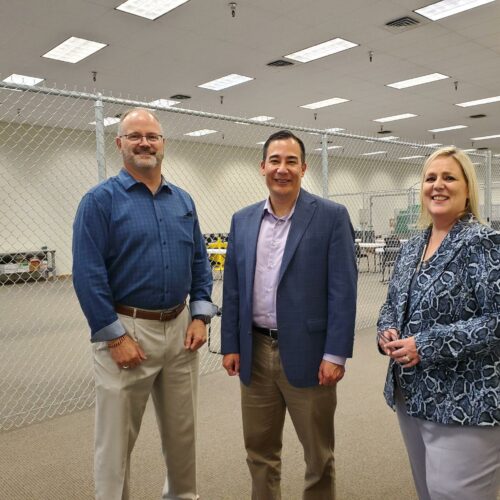