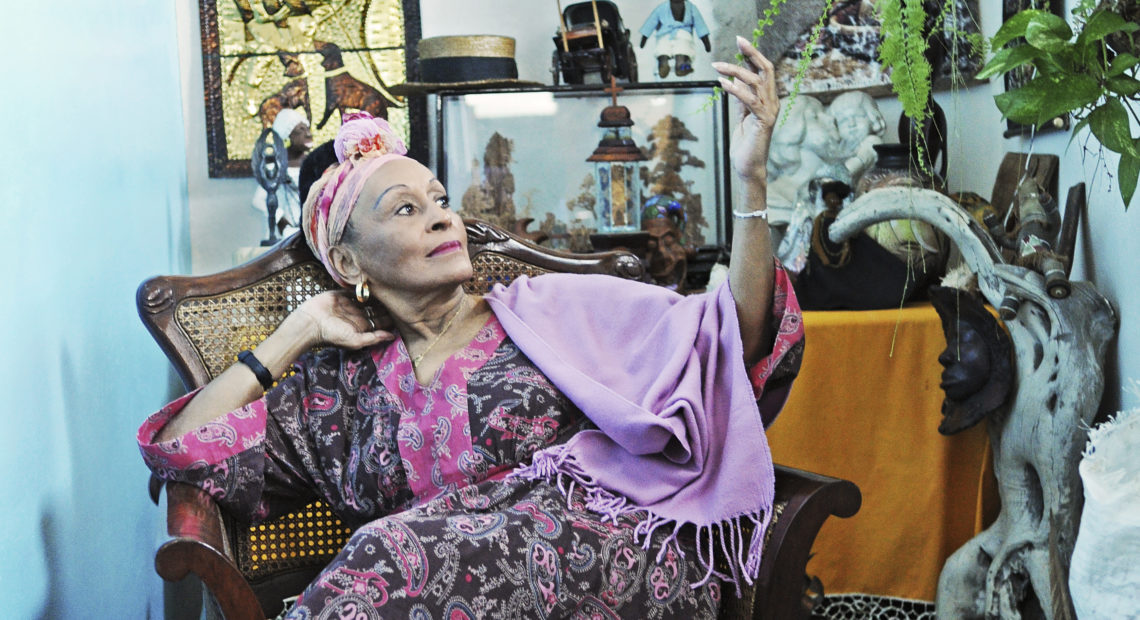 PHOTO: Omara Portuondo may be on her “Last Kiss” Tour, but the Cuban music matriarch says she plans to keep performing for as long as possible. CREDIT: Johann Sauty/Courtesy of the artist

In 1996, Omara Portuondo was working on an album at Havana’s famous recording studio, Egrem. Upstairs, American musician Ry Cooder was laying down tracks for Buena Vista Social Club, a project with veteran Cuban musicians like Compay Segundo. Portuondo was invited to come up and sing a duet with him. They sang “Veinte Anos,” a song Portuondo learned as a child.

“Without rehearsal, this was a live recording. One take. It’s unbelievable,” says Cuban bandleader Juan de Marcos Gonzalez. He had scouted and rediscovered the older musicians for Buena Vista Social Club. But he says Portuondo was still a star on the island, and bringing her into the project was a dream.

“I remember that once, Mr. Ry Cooder told me, ‘Omara is the Cuban Sarah Vaughan.’ And I said to him, ‘No, Sarah Vaughan was the American Omara Portuondo,'” Gonzalez says.

NPR met up with the legend herself at a downtown Los Angeles hotel the day she began her latest world tour, deemed “The Last Kiss.” Now 88 years old, Portunodo sometimes sings answers to questions about her long career.

Portuondo’s first gig for her latest world tour was at LA’s Regent Theater. Even though she was sitting, she had the audience clapping, dancing and singing along.

“Omara is the most important singer of our culture,” Cuban pianist Roberto Fonseca, who performs with Portuondo on the tour, says. “She’s able to do any Afro-Cuban style, Latin jazz, jazz, boleros, traditional Cuban music, rumba. She’s magical, intense, pure, strong.The audience … the public … they are crying, smiling, dancing. All the time, she’s making jokes.”

“Yes, she’s flirting with the audience the whole time,” Alicia Adams, international program director for the John F. Kennedy Center for the Performing Arts in Washington, D.C. says. Adams brought Portuondo to the center’s Cuban Arts Festival last year, and recalls seeing the singer peak out from beneath the curtain to wave to her fans. Adams says as relations between Cuba and the U.S. have morphed over the decades, Portuondo has always been a cultural ambassador.

Unlike some other Cuban musicians — including her sister Haydee and her old friend, the late Celia Cruz — Portuondo chose not to defect to the U.S. She says she comes and goes from her home in Cuba as she likes, pretty much like her father, Bartolo Portuondo, did. He’d been a black professional infielder for both the Cuban League and the Negro Leagues in the U.S. Portuondo says that he was a great baseball player and that her mother, who was white, scandalized her upper-class family by marrying him.

When she was a little girl, Portuondo dreamed of being a ballet dancer. But she says in those days, you could only dance ballet if you were white. Instead, she and Haydee danced and sang at Havana’s famous Tropicana. Later, in 1945, the sisters formed a quartet with two other women, Elena Burke and Moraima Secada (the aunt of singer Jon Secada’s.) The Cuarteto D’Aida danced and sang in nightclubs and on television. The quartet even backed Nat King Cole when he performed in Havana.

Portuondo sang with the quartet for 15 years before launching a solo career in 1963. Since then, she’s sung with everyone from Pablo Milanes and Chucho Valdes to Los Van Van and reggaetoners Yomil Y el Dany. She even sang in the 2009 Spanish version of Disney’s The Princess and the Frog. For years, Portuondo was associated with Cuba’s movimiento filin — the feeling movement that celebrates singers who interpret lyrics with great emotion.

Portuondo remained a star in Cuba, but it was the Buena Vista Social Club that introduced her to an even bigger audience in the U.S. and around the world. Audiences wept for her duets with Ibrahim Ferrer, who Portuondo sang with in the 1950’s. He’d been long-forgotten until the Buena Vista Social Club. The group’s first album won a Grammy award in 1998. And an Oscar-nominated documentary by Wim Wenders chronicled the group’s journey from Cuba to an historic concert at Carnegie Hall.

Portuondo never stopped recording or performing. Gonzalez says for many years, Portuondo also sang with his band, the Afro-Cuban All Stars. As for this tour being her “last kiss”? Gonzalez says that’s just marketing ploy . “She’s going to die on the stage. That’s what she wants,” he says. “She’s the Cuban diva.”

And Portuondo agrees. “Despedida? No.” This is not goodbye, Portuondo says as she breaks into song: “Lo que me queda por vivir será en sonrisas“: “What I have left to live for is smiles,” she sings, adding “Me queda tiempo todavia,“: “I still have time.”