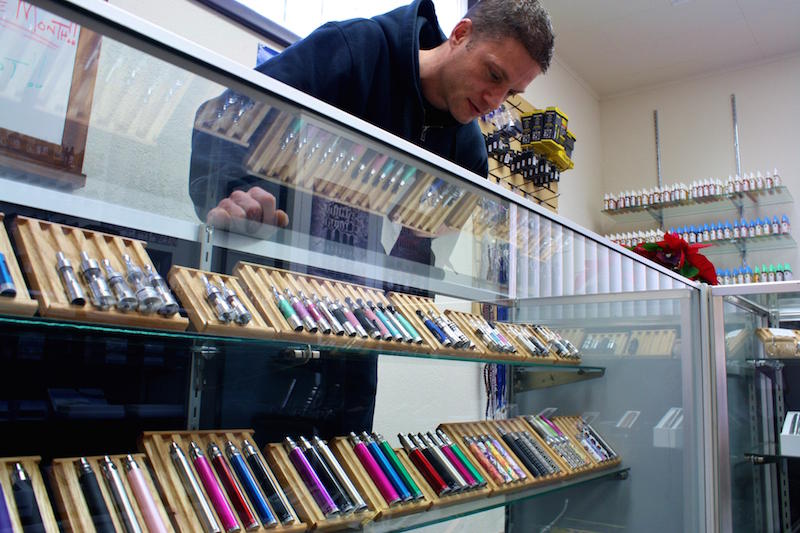 After years of debate, Washington Gov. Jay Inslee is scheduled to sign into law on Tuesday a new tax on vaping products to fund cancer research and tobacco cessation and prevention efforts. But critics say the tax measure could put individual vape shops out of business and amounts to a giveaway to big tobacco companies.

The vape tax was the last bill to pass the Legislature in the final moments of Washington’s 105-day legislative session, just before a midnight deadline. The vote followed frenetic behind-the-scenes negotiations between the House and Senate, the governor’s office and industry representatives, including lobbyists for the tobacco industry, according to Democratic state Rep. Gerry Pollet, the prime sponsor of the vape tax bill.

Half the proceeds from the tax will be dedicated to the Andy Hill Cancer Research Fund, named after the late state senator, a non-smoker, who died of lung cancer in 2016. The other half of the proceeds will go to fund public health services, including tobacco and vaping use prevention and education efforts. Because of the last-minute nature of the final bill, it’s not clear yet how much money the new tax will raise per year.

While praising the new funding for cancer research and smoking prevention, the American Cancer Society’s Cancer Action Network predicted the revenues will fall short of the levels recommended by the Centers for Diseases Control and Prevention “for an effective prevention program in Washington State.”

“Furthermore, we regret that the level of the tax is lower than we believe we need to effectively deter youth from a lifelong addiction to tobacco,” said Stephanie Winn, with the Cancer Action Network, in a statement.

In addition to the new vape tax, the tax bill will grant a 50% reduction in the state’s existing 95% tobacco tax for any new “modified risk tobacco” products the Food and Drug Administration (FDA) authorizes to be marketed as a safer alternative to cigarettes.

So far no products have received approval to be marketed in this fashion. But two days after the Washington bill passed, the FDA authorized the sale in the United States of Marlboro Heatsticks and other new heat-not-burn products manufactured by Philip Morris International.

The company’s application to the FDA to market the products “with claims of reduced exposure or reduced risk” is still pending. Until and unless that happens, they wouldn’t qualify for the reduced tax rate. Altria, the parent company of Philip Morris USA, has the exclusive rights to distribute the Heatsticks product in the U.S.

According to Pollet, the reduced tobacco tax provision was necessary to get the votes in the Washington Senate to pass the vape tax, an issue he’s been working on for at least seven years.

“We were told to negotiate with, in my terms, the purveyors of cancer,” said Pollet.

Pollet said Republican state Sen. John Braun, who sponsored a version of the vape tax bill in the Senate, told him to work directly with Altria’s lobbyists in Olympia. Braun disputed that characterization in a phone interview on Monday.

“Making them the devil isn’t going to solve our problem,” said Braun, who supports a tiered tobacco tax based on the potential harm of the product being taxed.

While Braun acknowledged Altria was involved in the negotiations, he said the final bill was far from what the industry had originally sought.

“This was not in the least a tobacco bill in my opinion,” said Braun.

Altria is also a major stakeholder in Juul Labs, maker of JUUL pods. On the Sunday morning before the vape tax bill passed, The New York Times published a story on Juul’s lobbying efforts in state capitols across the nation.

Records from Washington’s Public Disclosure Commission show that Altria has contributed at least $455,354 to Washington candidates and campaign committees since 2007.

A spokesman for Altria did not immediately have a comment for this story.

Even as recriminations continue over how the vape tax bill was negotiated, some independent vape shop owners are warning the new tax will put them out of business.