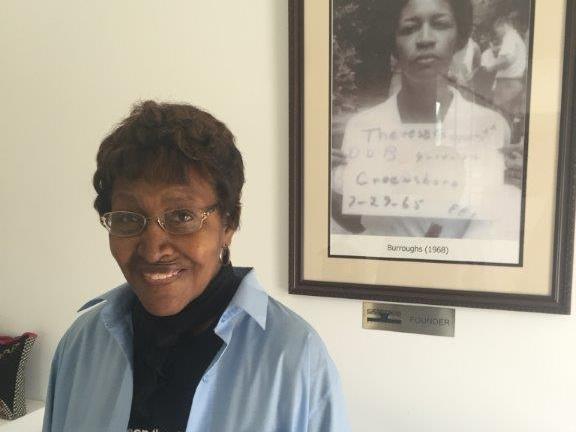 Theresa Burroughs, who proudly called herself a foot soldier for the right to vote, has died in Greensboro, Ala. She was 89.

Greensboro is part of Alabama’s Black Belt, a region named for its rich black soil, and known for its oppression of black citizens during the Jim Crow era, including erecting obstacles to the vote. She said no one around her talked about it then out of fear.

“When I was a child,” she recalled in a 2016 interview with NPR, “I would see white people getting dressed and going on Tuesdays. And I would wonder where are they going? They said they were going to vote. … And I said, ‘Why can’t we vote?’ ”

Civil rights “foot soldier” Theresa Burroughs in 2016, in front of a photo of the day she was arrested in 1965. Burroughs has died at age 89.
CREDIT: Debbie Elliott/NPR

But as an adult she went to the county courthouse 10 times before the registrar finally recognized her right to vote. She says sometimes she was tested with irrelevant questions, one of which as she told Story Corps, was how many black jelly beans there were in a jar. Then, as she began to tire of trying, on one occasion she was told she must recite the preamble to the Constitution.

“I didn’t say the preamble. I said, ‘We hold these truths to be self-evident that all men are created equal, that they are endowed by their Creator with certain unalienable rights, that among these are life, liberty and the pursuit of happiness.’ He said, ‘You pass.’ ”

In 1965, Burroughs endured arrest and an attack by state troopers and sheriff’s deputies as she and other civil rights demonstrators tried to cross the Edmund Pettus Bridge in Selma.

She founded the Safe House Black History Museum in Greensboro to document the civil rights struggle for future generations. It’s in the house where local residents hid the Rev. Martin Luther King Jr from the Ku Klux Klan on a visit to west Alabama in 1968.

In 2016 she told NPR she never missed a chance to exercise what she considered to be a sacred right. “Every time there’s a vote, I go,” she said.

She was frustrated that year because Alabama had curtailed driver’s license offices in predominantly African American rural counties, yet required an ID to vote. She said it showed the continuing battle over voting rights.

“It’s really not over. This is just another stage of harassing us and trying to get us, I don’t know, to disappear?” But she promised, “We’re not going to do that.”