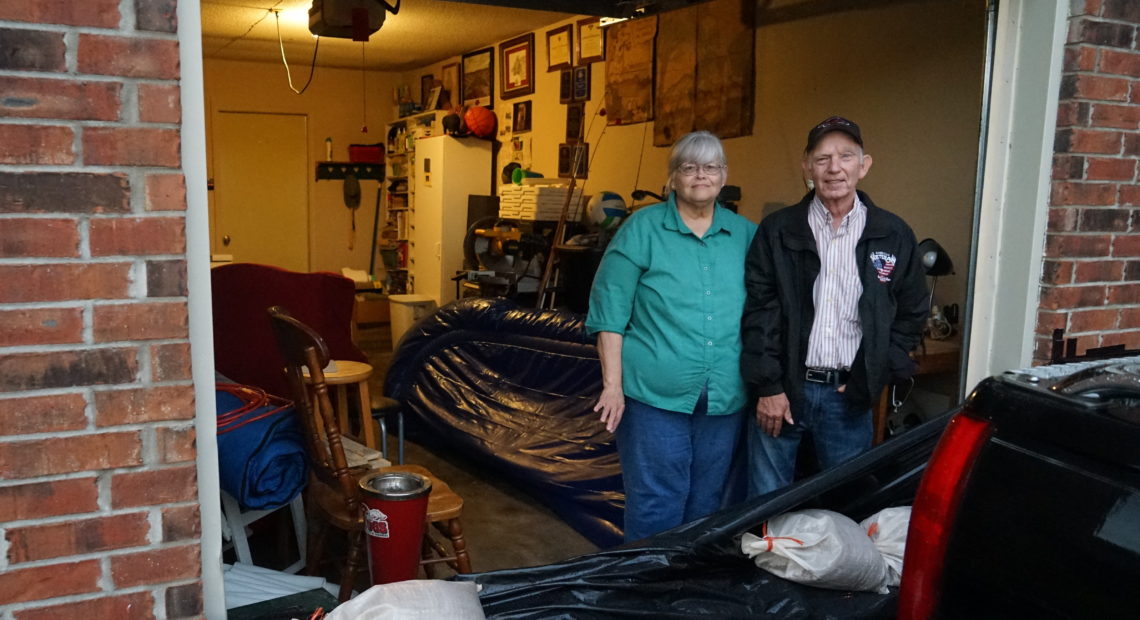 PHOTO: John and Louise Hutchins stand in their garage in Fort Smith, Ark., behind a homemade sandbag barrier. They chose not to evacuate, in part because they did not think their neighborhood would flood. CREDIT: Nathan Rott/NPR

Arkansas Gov. Asa Hutchinson said Thursday the high water is costing the state economy an estimated $23 million each day. The river is currently forecast to crest on Wednesday in Little Rock, and there is so much water moving downstream that it will likely be more than a week before floodwaters begin to recede from many areas.

His state joins others from the Dakotas down to Louisiana that have been dealing with weeks or even months of record-breaking flooding along the Mississippi River and its major tributaries. Back-to-back rainstorms have swept across the region, sometimes dumping inches of rain in just hours. 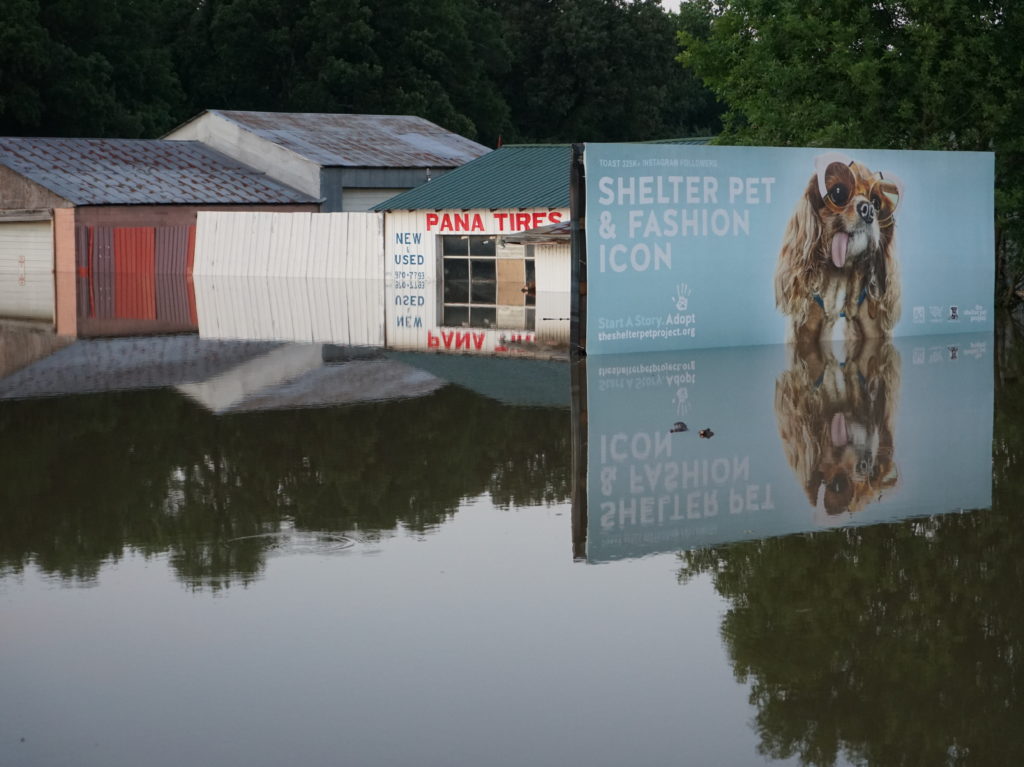 Businesses are underwater along the Arkansas River, including near Dardanelle. A levee broke just across the river overnight on Thursday. CREDIT: Nathan Rott/NPR

And, while flooding is a part of life along the rivers, this spring’s relentless, extreme rain makes the disaster unfolding at the center of the country emblematic of a larger trend: Climate change is causing more extreme rain in some parts of the U.S., and that can cause more extreme flooding.

According to the most recent National Climate Assessment, “The frequency and intensity of heavy precipitation events across the United States have increased,” especially in the northern and central parts of the country.

That means, although this flood is breaking records across the central U.S., it may not be the last time officials, and infrastructure, will be forced to deal with a disaster of this magnitude. On the Arkansas River, levees were built more than 60 years ago in most cases, and were not necessarily designed to withstand the kind of constant onslaught of high water that comes with a multiweek flood.

It all adds up to hundreds of thousands of people, and millions of dollars in commerce, relying on infrastructure that, in many cases, was not designed to protect against so much water for such a long period of time.

So far, water has come over the top of a handful of levees on the Arkansas, including a major break near Dardanelle overnight on Thursday. Hundreds of workers are surveying the structures, looking for weaknesses and patching low areas with extra sand.

The prolonged flooding also has created problems for emergency officials who rely on evacuations to keep people safe. In some areas, it’s been difficult to convince residents whose homes have never flooded that they need to leave.

“There are a lot of people who just didn’t want to leave,” says Jesse Cantu, who evacuated with his four children from near the community of Toad Suck. On Thursday, they were one of the only families at the Red Cross shelter nearby.

“Actually, our landlord hasn’t evacuated,” Cantu said. “Hopefully it doesn’t get to a situation where they have to rescue him. It’s pride, and it’s, like, he’s seen the river come up before and it’s always been fine, so he just said, ‘I’m not leaving.’ ”

“It’s been less busy than what we thought it would be,” says Red Cross volunteer Jim Hewitt, standing in a nearly empty gymnasium filled with cots. “We’ll be here until they don’t need us anymore. It’s going to take a long time for the water to go down.”

Even Cantu’s sister-in-law and her family have refused to evacuate to the shelter. “She didn’t want to leave because it never happened before. Like, last time it hit it didn’t even get to our parking lot,” he says. “I’m like, “Yeah, but this time it is. It’s going to crest even more than record.’ So you have to understand that, and leave. Or you might not survive this.”

Cantu says, so far, he hasn’t been able to convince all his extended family to come to the shelter, and the water has cut off access to some neighborhoods, stranding those who stayed behind.

Upstream in Fort Smith, John Hutchins and his wife of 42 years, Louise, stand in their open garage behind a knee-high wall of sandbags, looking at their flooded street. What had been parking spots looks like a pond, complete with a flock of geese. There’s a parked car with water up to the wheel wells. Many of their neighbors have evacuated.

“We just felt like we didn’t need to leave our home,” Louise says. “We had a fire battalion chief that said he recommended that we leave, and I looked at him and said, ‘OK, thank you.’ And I didn’t go anywhere.”

“So as long as we had power, we was gonna stay,” John adds.

“This isn’t a flood zone,” Louise says. “Supposedly. Talking to some of the neighbors who’ve lived here for years, it’s never done this.”