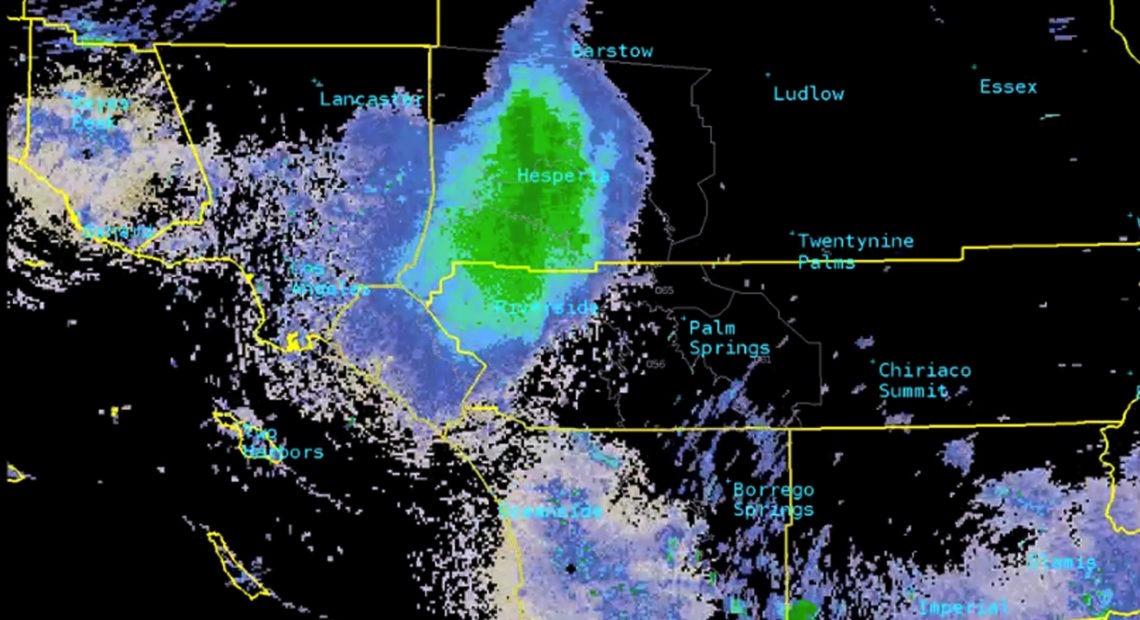 Spotted: A Swarm Of Ladybugs So Huge, It Showed Up On National Weather Service Radar

PHOTO: A huge blob that appeared on the National Weather Service’s radar wasn’t a rain cloud, but a massive swarm of ladybugs over San Bernardino County in Southern California. CREDIT: AP

“It was very strange because it was a relatively clear day and we weren’t really expecting any rain or thunderstorms,” Casey Oswant, a NWS meteorologist in San Diego, tells NPR. “But on our radar, we were seeing something that indicated there was something out there.”

So the meteorologists called a weather spotter in Wrightwood, Calif., near the blob’s location in San Bernardino County. Oswant says the spotter told them the mysterious cloud was actually a giant swarm of ladybugs.

The phenomenon is known as a ladybug “bloom,” and while this one appears particularly large, Oswant says it’s not the first time local meteorologists have spotted the beetles.

On the radar, the cloud of insects looked like a “light rainstorm” — not quite the density of a severe thunderstorm, she says. They were flying about a mile above the ground, she said, in the cloud that was about 10 miles wide.

The mass of beetles was spotted heading south just before 9 p.m. on Tuesday night. The weather watchers lost sight of the cloud overnight, and the ladybugs’ current location isn’t clear.

The large echo showing up on SoCal radar this evening is not precipitation, but actually a cloud of lady bugs termed a “bloom” #CAwx pic.twitter.com/1C0rt0in6z

California has numerous species of ladybugs. It’s not certain what kind made up the cloud, but it’s highly likely they are Hippodamia convergens, commonly known as the convergent lady beetle, says Cornell University entomologist John Losey. He runs The Lost Ladybug Project, a citizen science project that tracks native species of ladybug.

Convergent lady beetles are plentiful in California. People across the country buy them because they eat pests such as aphids in the garden.

Losey says the convergent lady beetle is migratory: “They’ll cycle between the lush valleys in California and then when it starts to warm up, they’ll go up in the mountains, where it’s a little cooler.”

There are three “cues” that determine when the species will move: food resources, temperatures and length of the day, he says. Typically, such large numbers wouldn’t be moving at the same time. “But somehow,” Losey says, “the combination of cues must have all sort of synchronized so that they went at a very similar time.”

Such a large group also may be a sign of the population’s health – but there are factors here that could potentially be worrisome, Losey says.

“It’s not exactly clear why we’re seeing this big swarm now that we haven’t before,” he says. “Is that just sort of a random effect of what happened in the weather and the prey populations? Is it having something to do with climate change that’s sort of condensing when they all are going to fly” or the recent wildfires in California?

It seems that this area of Southern California still has numerous ladybugs, even after the swarm headed south toward Mexico. Here’s a video posted on Instagram late Wednesday: