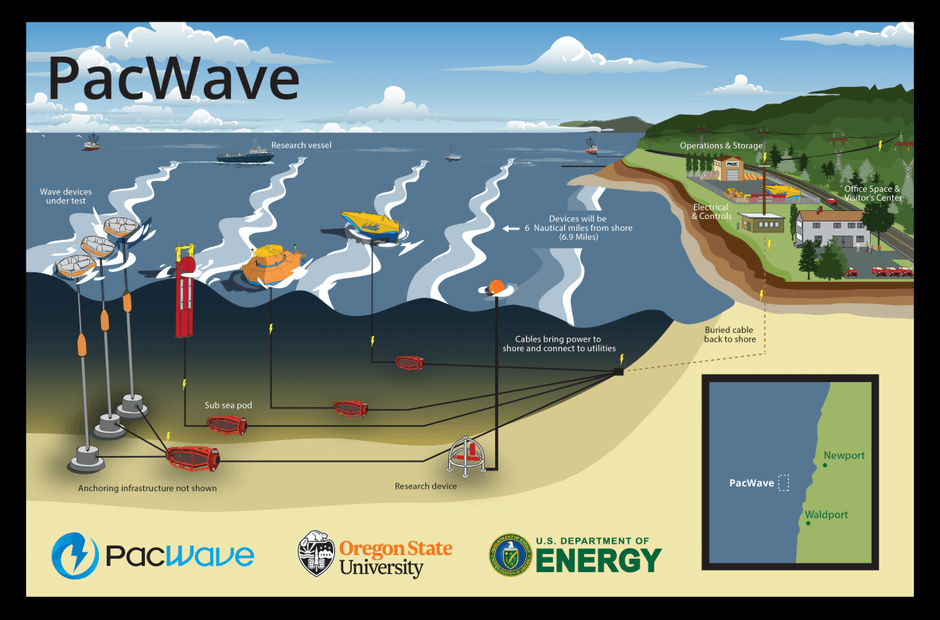 A renewable energy project planned off the coast of Newport is taking a step forward. Oregon State University has submitted a final license application for a wave energy testing facility with the Federal Energy Regulatory Commission. If built, it would be the largest of its kind in the United States.

Oregon’s potential to use the motion of the waves to generate electricity is very high. But nationally, the development of wave energy has lagged behind other green energy sources.

Part of the delay is the time and expense involved in permitting new technology. Not only do companies have to pay to develop this kind of clean tech, they also have to go through a lengthy and expensive permitting process before being allowed to see if their ideas work in the real world.

This is where Oregon State University’s PacWave South Project comes in. The university plans to create a wave energy testing facility about 6 miles off the Oregon Coast. The idea is that energy developers will be able to by-pass the permitting and just pay the University to test their wave energy converters in the water.

“If you look at the environment off the coast of Oregon, it’s one of the more harsh wave climates in the world,” said PacWave project manager Justin Klure. “If you can get past an Oregon winter with the technology and prove that you can not only survive, but also generate electricity, that would be the ultimate goal.”

The ultimate goal is to speed up the development of this largely-untapped source of clean energy – both in Oregon and nationally.

The footprint of the project includes four wave energy testing “berths” spread over an area of about 2.5 square miles in federal waters southwest of the coastal town of Newport. Each berth would have its own undersea cable that would run to shore and connect to the grid near Driftwood Beach State Recreation Site. At full capacity, the wave energy array could generate 20 megawatts of power.

“I don’t think we expect that right out of the gate. I think what you’ll likely see is a device in one berth, maybe two or three in another. And as the industry evolves over time, you could see a full buildout of up to 20 devices,” Klure said.

The public is expected to have a chance to weigh in on the FERC permit later this summer, although public meetings have not yet been announced.

The FERC permitting process, while the most involved, is one of many state and federal approval needed for the project to move forward.

PacWave South is partially funded by the U.S. Department of Energy. DOE says the goal is to have the test facility operational by 2022.