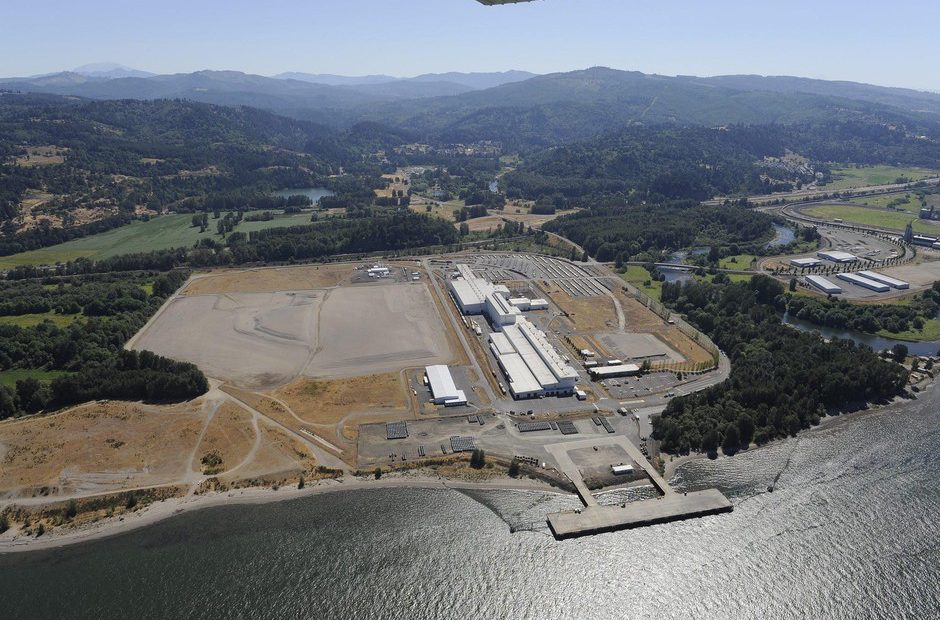 Port of Kalama commissioners unanimously passed a lease amendment with a controversial methanol facility Wednesday night that prohibits the company from exporting its product for fuel.

Port officials said the changes ensure the methanol from southwest Washington will only go toward making plastics and other materials. At Wednesday’s meeting, port spokesperson Liz Newman told commissioners the amendment “affirms what has always been the intent of this project.” She said the port was doing its due diligence in response to concerns raised about the use of the methanol earlier this year.

In April, OPB first reported that NWIW had shown a series of slideshows to court possible investors in the project. PowerPoint presentations leaked to OPB emphasized a growing market for methanol as a transportation fuel, rather than for plastic.

“It’s a desperate attempt to get around a huge mess they’ve created for themselves by misleading regulators for about five years,” said Dan Serres with Columbia Riverkeeper, an environmental group that’s challenging the company’s claim the plant would reduce greenhouse gas emissions. “I think it’s hard to imagine anyone taking this seriously when they got caught red-handed promoting this project as a fuel and energy depot to potential investors.”

NWIW said the slides were for educational purposes and maintains their methanol product is still on a pathway toward materials. NWIW’s general counsel, Kent Caputo, said they worked closely with the Port of Kalama on the amendment to “minimize any sense of confusion” on the use of the methanol

“We have to live up to our word and we intend to,” Caputo said. “And what the port’s come up with, we think, is a powerful, solid tool toward that end.”

The $1.8 billion refinery would convert natural gas into methanol, which NWIW says would be shipped to Asia for plastics and other materials. NWIW first signed a dock usage agreement in April 2014 to lease approximately 90 acres at the north end of the Port of Kalama.

The newly passed amendment includes a covenant that no quantity of methanol produced at the facility shall be sold for use as fuel products. It also allows unannounced audits and port inspections of NWIW sales records and requires the company to complete an annual documentation of shipped methanol.

If the company is caught selling its methanol as fuel, the contract could bring penalties. NWIW would pay a 100% and surcharge fee of the port’s rate of $1 per metric ton of methanol sold for the first violation of the contract. The second violation would be 200%. If the company breaches the contract a third time, the surcharge fee would increase to 300% and NWIW would lose access to the dock for at least a year. All penalty fees paid by NWIW would go to a greenhouse gas mitigation fund, according to port documents.

Serres said he doesn’t believe the port or the company have the resources to police where NWIW’s methanol ultimately ends up in Asia. He also believes the company is doubling down on its promise of a non-fuel pathway to skirt further greenhouse gas emissions analysis in its final environmental review.

“That seems like a big mistake and a critical error in how this project should be evaluated,” Serres said.

Washington’s Department of Ecology has also raised the issue. In its comments on the project, the state agency recommends that the final environmental impact statement review methanol’s use as a transportation fuel.

At Wednesday’s meeting, about half a dozen people spoke against the project before commissioners discussed or voted on the amendment. Some complained that the document had not been made available to the public before the meeting.

“The public has not been able to read the amendment, so how can we make intelligent decisions about this project?” she asked.

There was little public discussion on the amendment among commissioners before the unanimous vote.

“Contracts are only as good as the people that sign them,” Commissioner Randy Sweet said. “We have no reason to not believe what we have discussed over the past five years and I think the penalties included in the contract amendment are significant and the contract does clarify very clearly what the use will be.”

County and state officials are reviewing the project, with a final environmental impact statement expected by the end of the summer.