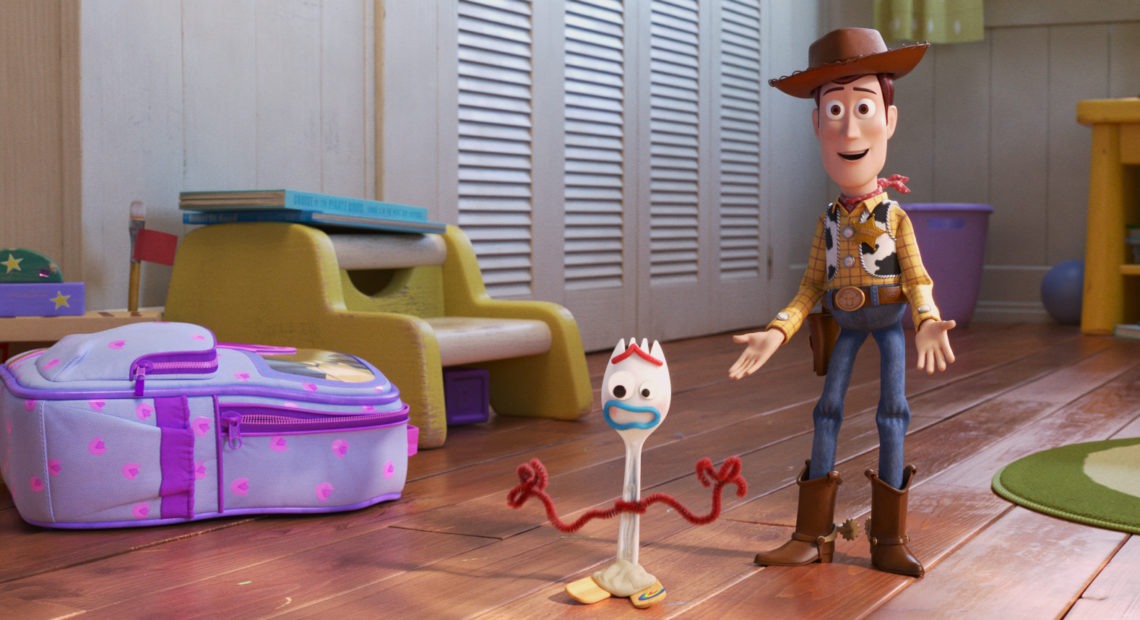 FILM REVIEW: To Infinity And … Be Done. After 4 Films, Have We Finally Outgrown ‘Toy Story’?

PHOTO: In the fourth installment of the Toy Story franchise, Bonnie comes home from kindergarten with Forky, a plastic fork with googly eyes and pipe cleaner hands voiced by Tony Hale. Sheriff Woody (voiced by Tom Hanks) has aged into an avuncular figure. CREDIT: Pixar

The Toy Story movies are about the secret lives of dolls and action figures that find their deepest fulfillment in a child’s embrace. But they’re really about what it means to be human: the joys of love and friendship and the pains of rejection and loss. But even more than the earlier films, Toy Story 4 feels haunted by the idea of impermanence. What happens when we outgrow something we once cherished? To put it another way: After three Toy Story movies, do we really need a fourth?

The director, Josh Cooley, and the writers, Andrew Stanton and Stephany Folsom, seem to have wrestled hard with that question, and they’ve come up with an entertaining if not entirely satisfying answer. Toy Story 4 is as funny and dazzling as you’d expect from a Pixar entertainment, but it’s also a more ungainly piece of storytelling than its predecessors: The humor is coarser around the edges and the plot takes wild, audacious leaps that don’t always pay off.

As the movie opens, Sheriff Woody (voiced again by Tom Hanks) is in the rare position of no longer being the favorite toy in the bedroom. He’s aged into an avuncular figure, concerned with making sure that he and his friends are there for their owner, Bonnie, when she needs them. But one day Bonnie comes home from kindergarten with a creature she made herself out of a plastic eating utensil, a pipe cleaner and two googly eyes. His name is Forky, and Bonnie’s love has brought him to life.

But Forky, voiced with neurotic terror by Tony Hale, sees himself not as a toy but as a piece of trash, which is why he keeps trying to hurl himself into the nearest wastebasket. As a mini-Frankenstein with suicidal urges, Forky represents the kind of existential conundrum that future dissertations are made of; perhaps only Pixar could make a children’s movie that leaves you pondering the origins of the soul and the nature of free will. Still, for the first time in a Toy Story picture, I found myself resisting parts of the premise.

Forky grows on you as a character, but his role is mainly to enable Woody’s reckless heroism, which is starting to look a lot like narcissism. When Bonnie brings her toys along on a family road trip, Forky gets lost, and Woody sets out to track him down. He finds him, but then they wind up in an antique shop where Woody spies something that reminds him of his old friend, the shepherdess Bo Peep, whom he hasn’t seen in years. That leads them to a doll named Gabby Gabby, voiced by Christina Hendricks with a sweetness that seems a little too good to be true.

Gabby Gabby has her own twisted plans for Woody and Forky. She might seem like the latest version of a familiar villain, the abandoned toy out for revenge. Happily, she turns out to be a more complicated and sympathetic figure than that. But the movie’s most richly layered character is Bo Peep, who was given away by her kid years ago and now spends her days with other renegade toys on public playgrounds. Don’t be fooled by that porcelain delicacy: Bo Peep, voiced by Annie Potts, has been toughened by her years off the grid, and it’s bracing to see her rebuke Woody, with his sentimental belief that every toy needs a child’s love to know its worth.

Naturally, Bo Peep will still help Woody and Forky find their way back to Buzz Lightyear and the others. Along the way we meet a lot of new toy characters, not all of them successful. If you like Canada jokes, you’ll like Keanu Reeves’ performance as a posturing motorcycle stunt rider named Duke Caboom. As for Ducky and Bunny, a pair of plush toys, they were obnoxious enough to wear down even my fondness for the actors Keegan-Michael Key and Jordan Peele.

Pixar being the well-oiled entertainment machine that it is, the disparate parts of Toy Story 4 eventually come together in smooth, even wizardly fashion. Long after the contrived and misfired bits have faded, the brilliantly visualized action sequences and the pinpricks of emotion stay with you. Still, bidding farewell to these characters for the fourth time, I couldn’t help but hope it would be the last, that the filmmakers would leave well enough alone. With all due affection for these movies and their astonishing quarter-century run, Woody isn’t the only one having trouble letting go.