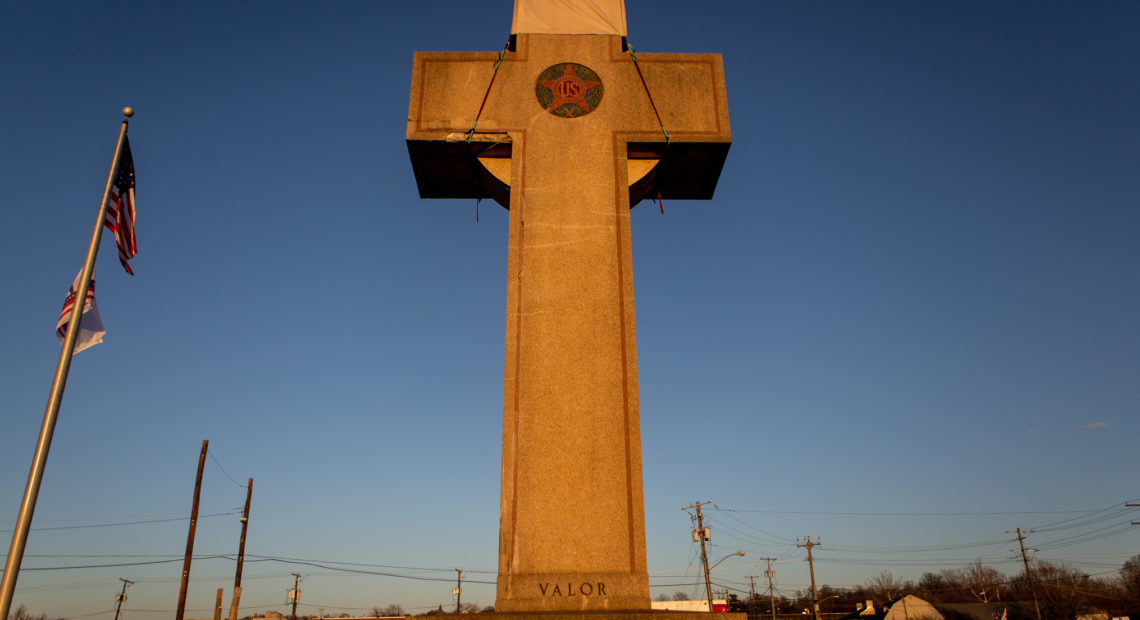 Supreme Court: Cross Can Stand On Public Land In Separation Of Church And State Case

PHOTO: A World War I memorial cross sits in Bladensburg, Md., just outside Washington, D.C. The federal government asked the Supreme Court to rule in favor of the cross. CREDIT: Becky Harlan/NPR

The U.S. Supreme Court ruled Thursday that a 40-foot World War I memorial cross can stay on public land at a Maryland intersection.

The cross “has become a prominent community landmark, and its removal or radical alteration at this date would be seen by many not as a neutral act but as the manifestation of a hostility toward religion that has no place in our Establishment Clause traditions,” the court wrote. Justice Alito wrote the majority opinion for the court.

“And contrary to respondents’ intimations, there is no evidence of discriminatory intent in the selection of the design of the memorial or the decision of a Maryland commission to maintain it. The Religion Clause of the Constitution aim to foster a society in which people of all beliefs can live together harmoniously, and the presence of the Bladensburg Cross on the land where it has stood for so many years is fully consistent with that aim.”

The decision was 7-to-2, but had multiple parts and not all of the seven agreeing on every aspect. The decision reverses a lower-court ruling that said the memorial is unconstitutional because it is on public land and maintained at taxpayer expense. The high court’s ruling is a major victory for religious groups and the American Legion, which warned that if this cross had to be moved, so too would other crosses that serve as war memorials.

Alito argued that the cross had essentially become secular. He invoked the history of World War I memorials noting the rows and rows of crosses and stars of David at cemeteries that memorialized those who died in that war and that established in people’s minds, in his view, that that was a way to honor to dead.

Justice Ruth Bader Ginsburg, in dissent, disagreed with Alito’s history. She noted that it’s clear what the purpose and meaning of the cross was from the start — it was religious. She argued that for Christians, it’s the Calvary cross symbolizing where Christ, the son of God, died and that his death and resurrection offer possibility of eternal life. She said Americans knew what it meant then and know what it means now.

The concrete cross at the center of the court’s decision is located in the middle of a busy median strip and directly across the street from a large pawnshop in Bladensburg, Md.

It was erected nearly 100 years ago when bereaved mothers in Bladensburg decided to build a World War I memorial to honor their fallen sons. When they ran out of money, the American Legion took over the project. But by the 1930s, a local parks commission had taken over the memorial and the responsibility for its maintenance.

Today, the cross is more grungy than grand. The concrete is crumbling; a canvas tarp covers the top, and without the $100,000 that the parks commission has budgeted for repair, the monument looks like it may not be long for this world.

The American Humanist Association challenged the placement of the cross, contending that “there is no meaning to the Latin cross, other than Christianity.” A federal appeals court agreed, declaring that its placement violated the Constitution’s ban on establishment of religion. The appeals court ruled that the cross should be moved to a private location and funded without taxpayer money.

Now the Supreme Court has reversed that ruling.