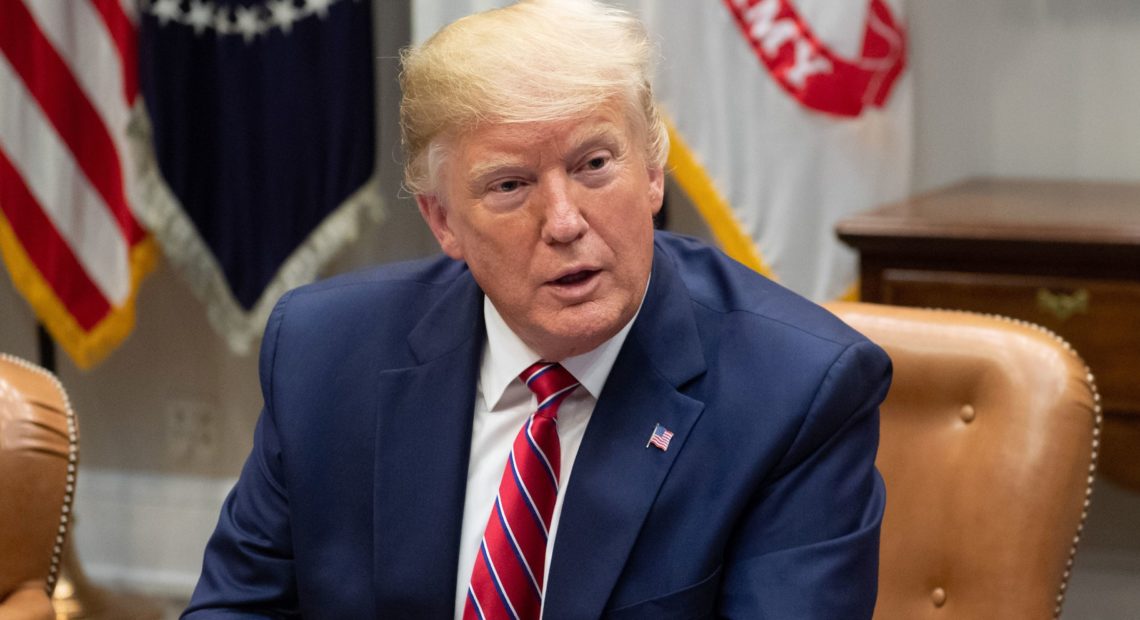 President Trump Faces New Sexual Assault Allegation. Here Are All The Others

Sixteen women have come forward with allegations against President Donald Trump, each accusing him of inappropriate conduct. The most recent, from writer and columnist E. Jean Carroll, appeared in NY Magazine on Friday.

The women’s charges range from unwanted touches and aggressive, sudden kissing to the latest accusation against Trump — that he attacked a woman in a dressing room and forced his penis inside her. Donald Trump, his campaign and the Trump White House have insisted all of the stories are fabricated and politically motivated. 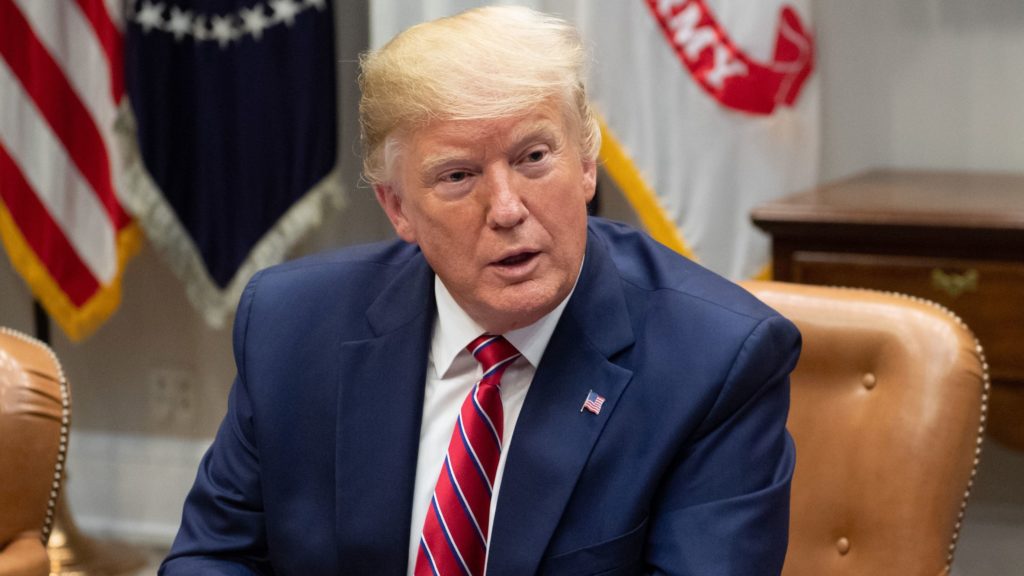 President Trump, pictured in the Roosevelt Room of the White House on June 12, spoke with ABC News about whether he would accept damaging information about a 2020 rival from another government. CREDIT: Saul Loeb/AFP/Getty Images

Kristin Anderson – Early 1990s. Story in the Washington Post on October 14, 2016.
Anderson says she was in a Manhattan bar with friends when the person next to her reached up her skirt and touched her vagina through her underwear. She says she turned and recognized the person as Donald Trump.

E. Jean Carroll – late 1995 or early 1996. Story in NY Magazine June 21 and expected in upcoming book.
Carroll describes running into Trump in a department store, where she says he recognized her for her widely-read advice column. Carroll says they went into a dressing room after Trump asked for her advice on a present – lingerie – for another woman. Inside, she alleges that he shoved her against a wall, “forcing his fingers around my private area, thrusts his penis halfway — or completely, I’m not certain — inside me.” A senior White House official issued a statement to NY Magazine calling the accusation, “a completely false and unrealistic story.”

“Jane Doe” aka “Katie Johnson” – 1994. Lawsuit filed June 2016, refiled October 2016 as reported by Buzzfeed and others, then dropped in November 2016. Jane Doe is an unnamed plaintiff, who has also gone by “Katie Johnson” in legal papers. She claims she was repeatedly raped by Trump and Jeffery Epstein at Epstein’s New York City apartment in 1994, when she was 13 years old. A witness, also given a pseudonym — “Tiffany Doe” — said she recruited “Jane Doe” and others. Doe, using the name “Johnson,” gave an interview to the Daily Mail in which she said she did not know who Trump was at the time of the alleged attack but identified him later when she saw him on television. It is not known why she withdrew the lawsuit. She has not spoken publicly or withdrawn her rape allegation since then.

Jessica Drake – 2006. Story made public at a news conference October 22, 2016.
While working as an adult film actress, Drake says Trump invited her to the room where he was staying in Lake Tahoe. In the room, she says he grabbed, hugged and kissed her and two other women who accompanied her without permission. Later, she alleges that Trump called her and pressed her to return to his room, offering $10,000 at one point. Drake says she declined.

Jill Harth – 1992-1993. Story in the The New York Times on October 9, 2016.
A Florida businesswoman who partnered with Trump and later dated him. Harth alleged that he groped her under the table at dinner with her boyfriend then repeatedly got her alone, and it would turn into a “wrestling match.” She sued Trump for breach of contract, sexual harassment and at one point attempted rape. She settled and then in 1998 dated Trump.

Cathy Heller – 1997. Story in the Guardian on October 15, 2016.
At a Mother’s Day brunch for Mar-A-Lago club members’ families in 1997, Heller alleges that when she was introduced to Trump, he grabbed her and tried to kiss her on the lips. Heller says she leaned back to avoid him and then he kissed her on the side of her mouth. CNN has reported Heller is a Democratic donor.

Ninni Laaksonen – 2006. Former Miss Finland. Story in Ilta-Sonomat on October 27, 2016. In English in the Telegraph.
Laaksonen told Finnish newspaper Ilta-Sonomat that Trump “squeezed her butt” as she and other pageant contestants stood next to him for a publicity photo, ahead of an appearance on The Letterman Show.

Jessica Leeds – Early 1980s. Story in The New York Times on October 12, 2016.
Leeds says she sat next to Trump in first class on an airplane and that he kissed her, groped her chest and reached up her skirt, leading her to move back to coach. “He was like an octopus,” she told The New York Times. In a NY Post report published October 14, 2016, a British man whose interview was arranged by the Trump campaign said that he was on the flight, that Leeds’ account is false and he remembers Leeds acting inappropriately.

Mindy McGillivray – Jan. 24, 2003. Story in Palm Beach Post on October 12, 2016.
Working as an assistant to photographers at Mar-a-Lago in 2003, McGillivray charges that Trump nudged or grabbed her from behind.

Jennifer Murphy – 2004. Story in Grazia on October 12, 2016.
A former Miss USA and “The Apprentice” contestant, Grazia says that Trump kissed her on the lips after walking her to the elevators following a meeting in New York, which he said was to discuss a possible job.

Cassandra Searles – 2013. Made story public in Facebook post in early 2016.
Miss Washington 2013, Searles wrote on Facebook, “He probably doesn’t want me telling the story about that time he continually grabbed my ass and invited me to his hotel room.”

Natasha Stoynoff – December 2005. Story on People.com on October 12, 2016.
Stoynoff was a celebrity reporter covering Trump for People Magazine. She alleges that Trump assaulted her while she was at Mar-a-Lago interviewing him and Melania Trump for a story about their one-year anniversary. She alleges Trump took her to a private room, pushed her against the wall and aggressively kissed her. Stoynoff also says a staffer told her Trump was waiting for her the next day at a massage appointment.

Temple Taggart McDowell – 1997. Story in New York Times May 14, 2016.
McDowell, who was Miss Utah USA 1997, charges that Trump suddenly kissed her without her consent on two separate occasions.

Karena Virginia – 1998. Story made public at a news conference October 20, 2016.
Virginia says that while she was waiting for a ride following the U.S Open tennis tournament, Trump walked up to her, grabbed her arm and touched her breast.

Summer Zervos – 2007. Story made public in a news conference October 14, 2016.
A former contestant on “The Apprentice,” Zervos alleges that Trump told her he wanted to discuss a possible job, but alone in a Beverly Hills Hotel bungalow, grabbed her breasts, kissed her and tried to lead her into a bedroom.

PAGEANT CONTESTANTS ALLEGING TRUMP WALKED IN WHILE THEY WERE DRESSING

OTHER ALLEGATIONS OF IMPROPER CONDUCT

Lisa Boyne – Summer 1996. Story in The Huffington Post on October 13, 2016.
Boyne alleges that at a group dinner, Trump and other men forced women to walk over the table to leave their seats and that Trump looked up the women’s skirts and commented on their underwear and genitalia.

The mother of three children with Trump, Ivana Trump charges that Trump “violated their bond of love” in a 1989 incident, which she has not described any further in public. She wrote that her reported words charging her ex-husband with “rape” in a deposition were figurative, that stories about a rape are “totally without merit” and she “ did not mean rape in the “criminal sense.” She is under a confidentiality agreement and cannot discuss her marriage publicly without approval from Donald Trump.