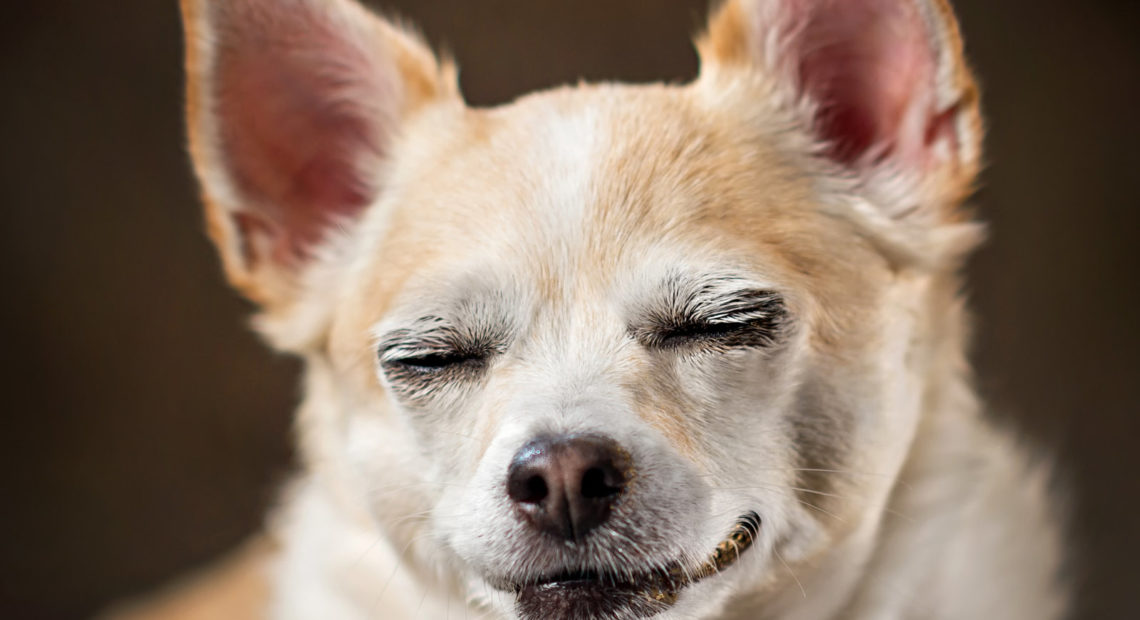 It all started on a Tuesday night, when I came home from work to an unmistakable absence. My brown-and-white pit bull mix, Maizey, wasn’t at the top of the stairs to greet me. Instead she was in her bed, shaky and confused.

When I tried to get her up, she stumbled, nearly falling over while standing still. Walking to the vet, she leaped like a puppy chasing imaginary balls. 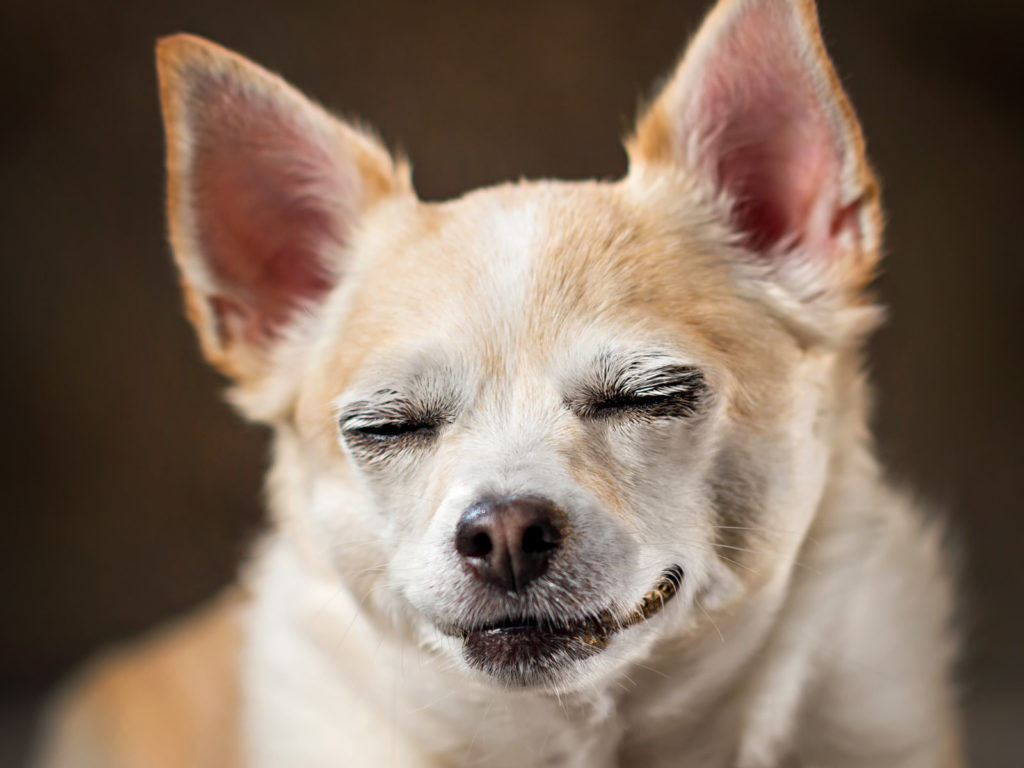 Later, at the 24-hour veterinary clinic in San Francisco’s Mission District, the staff ran some tests and determined Maizey was in no immediate danger.

Instead, they wagered a guess that Maizey was simply high. On marijuana.

How are dogs getting high?

“Dogs will get into anything and everything,” says veterinarian Dorrie Black, of the veterinary clinic Animal Internal Medicine and Specialty Services.

Thirty-three states and the District of Columbia now have legalized pot in some form. And since Colorado ushered in recreational marijuana in 2014, nine more states and D.C. have followed. As weed has become easier for people to get, it has also become a hazard for dogs.

Black says dogs ingest marijuana by eating the remainder of a joint, or getting into someone’s edible marijuana, either at home, on the street or in parks.

Another unsavory source in San Francisco — and other cities with high numbers of people living on the streets — is human feces tainted with marijuana. This is, in fact, what we think happened to Maizey. She spent quite a bit of time in the park bushes the morning she got stoned.

Black and other veterinarians believe this particular problem is becoming more common in the Bay Area, as the homeless population grows.

Veterinarian Benjamin A. Otten of allCREATURES veterinary clinic in El Cerrito, Calif., says he looks for these telltale symptoms when identifying “marijuana toxicity” in a dog:

Dogs exhibit these symptoms because THC — the psychoactive element of marijuana — is poisonous to them. Despite that, none of the vets interviewed for this story has seen an animal die from marijuana toxicity.

“There’s nothing about that actual drug itself that will kill them,” Black says. “It doesn’t cause any organ failure. It doesn’t cause liver failure [or] renal failure.” 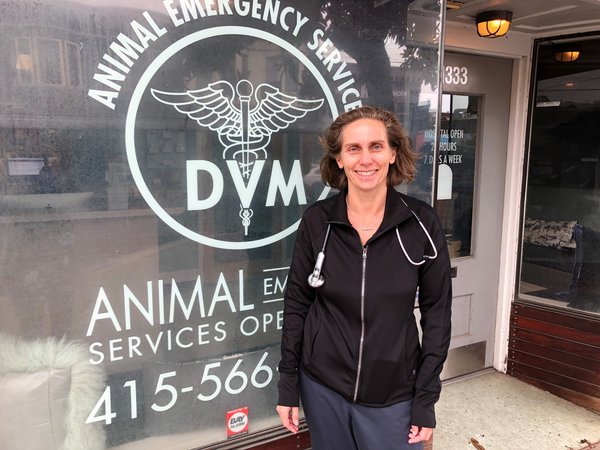 Dr. Dorrie Black works at a 24-hour veterinary clinic near Golden Gate Park in San Francisco. She says she often treats up to three dogs per week who have ingested marijuana.
CREDIT: Laura Klivans/KQED

What can happen, Black says, is that the drug can sedate a dog so fully that it will inhale its own vomit, which can be lethal. For that reason, Black cautions pet owners to play it safe.

“If you do not know the quantity that they got into, I’m always going to recommend that you go to your vet,” she says.

A Colorado study several years ago found that two dogs who had ingested chocolate baked goods made with marijuana-infused butter had died, but it’s unclear if this was from the marijuana, the chocolate, or the combination of those components. Butter and dark chocolate, common ingredients in edible marijuana products, can be highly toxic to dogs.

Cannabidiol, or CBD, on the other hand, is actually marketed to pet owners for a variety of pet ailments. But the research is still incomplete about its efficacy for treating things like animal anxiety and seizures, and veterinarians are not allowed to recommend CBD to patients (although there is a bill making its way through California’s Senate that could change that).

How do you treat a dog that has ingested marijuana?

To reduce marijuana’s effects on a dog, there are a few options, according to Black: Veterinarians can induce vomiting, pump the dog’s stomach or give the pet activated charcoal, which will help remove the marijuana from the dog’s system.

On average, it typically takes about 24 hours for a dog to return to normal after such an ingestion — but that time varies, based on the strength and amount of the marijuana the dog has eaten.

Otten, who formerly worked as an emergency vet, jokes about what he used to tell his pet owners: “We’re going to take your dog in, we’re going to put him in a quiet room. We’re going to play some Led Zeppelin for him and give him some Doritos and you can pick him up in the morning.”

How much does treating your dog for marijuana ingestion cost?

While my own vet bill put us out $300, veterinarian John de Jong, president of the American Veterinary Medical Association, says interventions like blood work and IV fluids could cost up to $1,000.

It seems to be more rare for cats to ingest marijuana. Black says she’s seen only one case involving a cat in her 17 years in emergency veterinary medicine.

While de Jong also has not seen any high cats come through his practice, he says some cats do like to chew on plants, which could be an issue if someone is growing marijuana at home.

How has legalization changed things?

Dr. de Jong, who is based in Massachusetts, says marijuana toxicity among pets may be on the rise in his state, where marijuana is legal for medical and recreational purposes.

“In those states that have legalized marijuana, we are seeing an increased incidence of marijuana toxicity in pets, especially in dogs,” he says.

Recreational marijuana use is legal in 10 states and the District of Columbia, and many more states permit the use of medical marijuana.

Calls to ASPCA’s Animal Poison Control Center about dogs eating weed have increased seven-fold since last year, and calls to the Pet Poison Helpline have quadrupled in the past five years. A 2012 study conducted in Colorado found a significant correlation between the number of medical marijuana licenses and marijuana toxicosis cases in dogs.

In California, both Black and Otten say the changes to marijuana’s legality have not significantly increased the number of visits they get from blitzed dogs and their owners. Black says she sees up to three affected dogs a week in the summer.

What has changed, however, Black and Otten say, is the potency of the drugs the dogs are consuming.

At the start of her career in emergency veterinary medicine, Black says, marijuana toxicity consisted of a dog eating the end of a joint with fairly low amounts of THC. But, she says, “we got heavier and heavier toxicities over time, because of medical-grade marijuana and because of edibles.”

As for my dog Maizey — she was just fine a few days after her foray into canine cannabis. Though she once seemed interested in imaginary balls, now she’s settled back into chasing real ones.