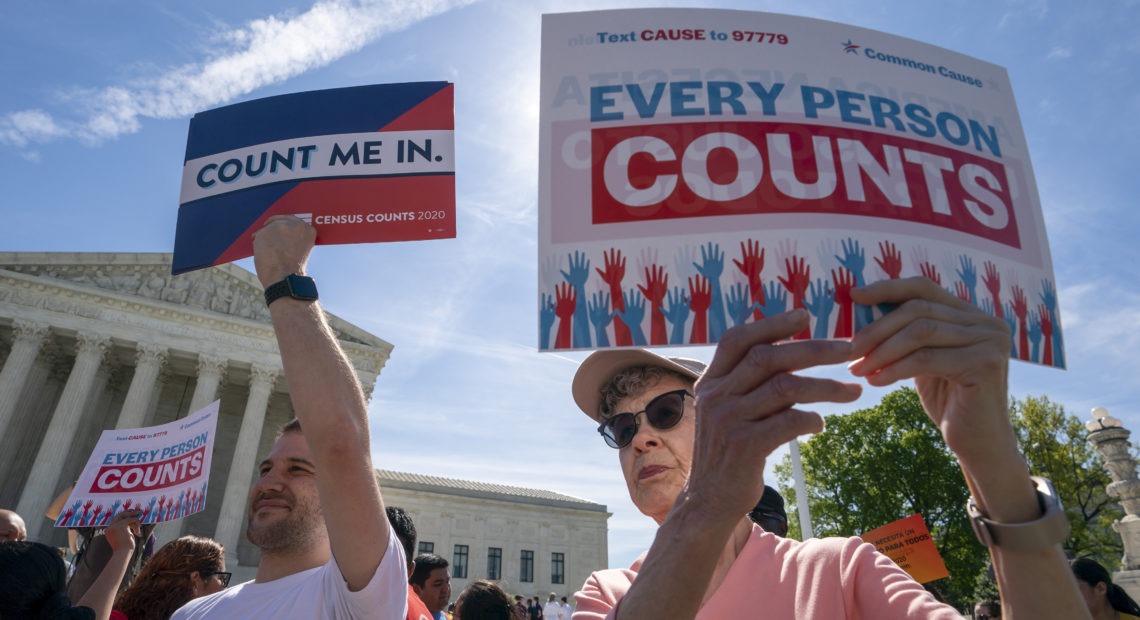 In a defeat for the Trump administration, the Supreme Court leaves the citizenship question blocked for now from the 2020 census, in part because of the government’s explanation for why it added it in the first place.

The majority opinion, written by Justice John Roberts, said it “cannot ignore the disconnect between the decision made and the explanation given” by the Trump administration.

“The reasoned explanation requirement of administrative law, after all, is meant to ensure that agencies offer genuine justifications for important decisions, reasons that can be scrutinized by courts and the interested public,” the majority opinion continued. “Accepting contrived reasons would defeat the purpose of the enterprise. If judicial review is to be more than an empty ritual, it must demand something better than the explanation offered for the action taken in this case.” 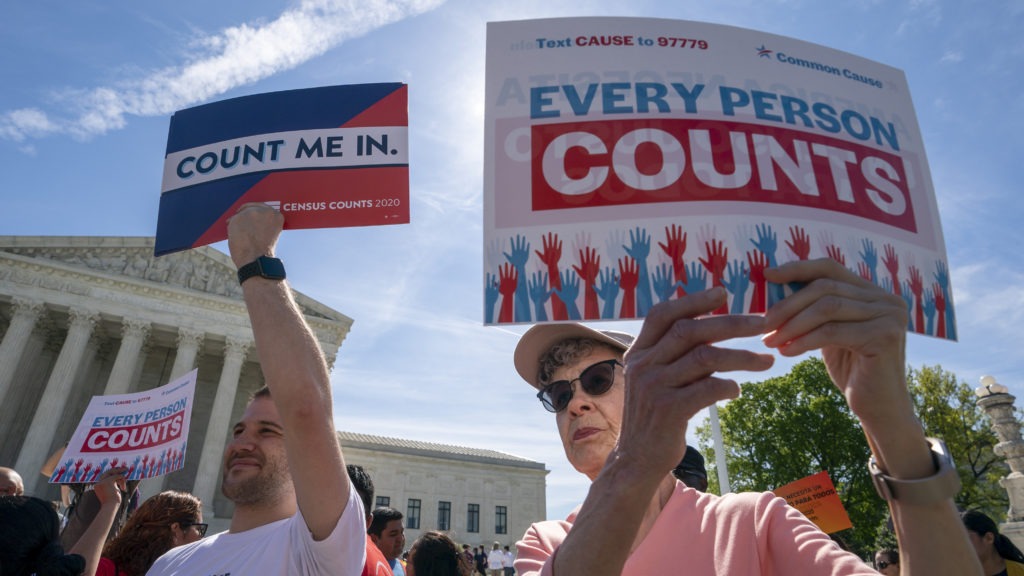 Demonstrators rally outside the Supreme Court in April as the justices hear arguments over the Trump administration’s plan to add a citizenship question to 2020 census forms.
CREDIT: J. Scott Applewhite/AP

The complicated decision comes more than a year after Commerce Secretary Wilbur Ross, who oversees the Census Bureau, overruled the unanimous advice of Census Bureau experts and approved the addition of the question, “Is this person a citizen of the United States?”

The high court’s decision could have profound political consequences. The new population counts from the 2020 census will determine for the next 10 years how many seats each state gets in the U.S. House of Representatives and how many Electoral College votes each state gets in presidential elections beginning in 2024. They also help determine how some $900 billion a year in federal money is allocated across the country for roads, schools, hospitals, health care and more.

New York Attorney General Letitia James, whose office led one of the lawsuits, says she’s “pleased” with the Court’s decision. “Thanks to the Court, the census will remain a tool for delivering our government’s promise of fairness and equity,” she said in a written statement.

Department of Justice Spokesperson Kelly Laco said it a statement that the department is “disappointed by the Supreme Court’s decision” and that it will “continue to defend this Administration’s lawful exercises of executive power.”

Census Bureau research has long shown that adding a citizenship question often leads people in households with immigrants — including those who are U.S. citizens — to simply not fill out the census form. That could result in an undercount that is not only substantial but uneven, according to Census Bureau experts, and it hits mainly in urban areas where immigrant groups live, while leaving rural, mainly white areas largely unaffected.

According to the Census Bureau’s own expert estimates, the addition of the question will likely reduce census responses among households with at least one noncitizen by at least 8 percentage points. That translates to an estimated 9 million people not participating in the constitutionally mandated head count of every person living in the U.S.

The bureau has also found that responses to the question would produce data less accurate and more expensive than existing government records on citizenship.

Dozens of states, cities and other groups challenged the addition of the citizenship question in court. The challengers maintained that Ross’ motivation for adding the question was political. Ross said the Justice Department wanted the citizenship information for enforcement of the Voting Rights Act. Three federal district courts subsequently found that explanation “pretextual” — in other words, a sham.

The high court’s decision comes amid a variety of new developments.

On June 12, the House oversight committee voted to hold Ross and Attorney General William Barr in contempt for failure to produce emails and other documents involving the citizenship question. Unless there is an agreement, the full House could vote on the contempt citation, but the timing is unclear. And unless the issue is resolved through the usual process of negotiation, it would be litigated in the courts.

In a separate development later that same day, organizations challenging the addition of the citizenship question in New York asked the Supreme Court to send the census case back to the lower court if necessary to resolve what the plaintiffs called newly discovered evidence casting doubt on Trump administration claims. The groups cite unpublished documents regarding the citizenship question on the late Thomas Hofeller’s hard drives, which were found by his daughter.

Hofeller, who died 10 months ago, was long one of the Republican Party’s top strategists on redistricting. Attorneys for the challengers in New York, led by the ACLU, contend that his hard drives contain documents showing that Hofeller “played a significant, previously undisclosed role in orchestrating” the addition of the citizenship question to be able to redraw political maps to favor Republicans and non-Hispanic white people. U.S. District Judge Jesse Furman of New York is set to review these allegations this summer.

“These allegations cut to the heart of this case,” attorneys for the New York challengers said in their Supreme Court filing.

They said that the Hofeller documents, which were discovered after the census case was argued before the Supreme Court, show that the administration’s rationale for adding the citizenship question was “concocted” to hide a racially and politically discriminatory motive.

The Hofeller files have also spurred U.S. District Judge George Hazel of Maryland to revisit claims in two Maryland-based lawsuits over the question. Plaintiffs in those cases asked him to reconsider claims of discrimination and of a conspiracy among Trump administration officials that the judge had previously decided did not have enough evidence to support.

“As more puzzle pieces are placed on the mat, a disturbing picture of the decisionmakers’ motives takes shape,” the judge added.

The Trump administration’s attorneys have said Hofeller played “little, if any, role” in pushing for a citizenship question. But in a recent court filing, attorneys for the Maryland plaintiffs say that he was in touch with a high-ranking Census Bureau official about the question as early as 2015.

Finally, earlier this month, the Census Bureau began conducting a test census with around 480,000 households in most parts of the U.S. to come up with a better fix for offsetting the projected decrease in census participation because of a citizenship question. The results “will inform staffing, training and planning decisions” for next year’s head count, Victoria Velkoff, an associate director at the Census Bureau, said at a public meeting in February.

The citizenship question issue is likely to continue to be a political lightning rod as the 2020 presidential race progresses.

In an April tweet, President Trump said that a census without a citizenship question would be “meaningless.”