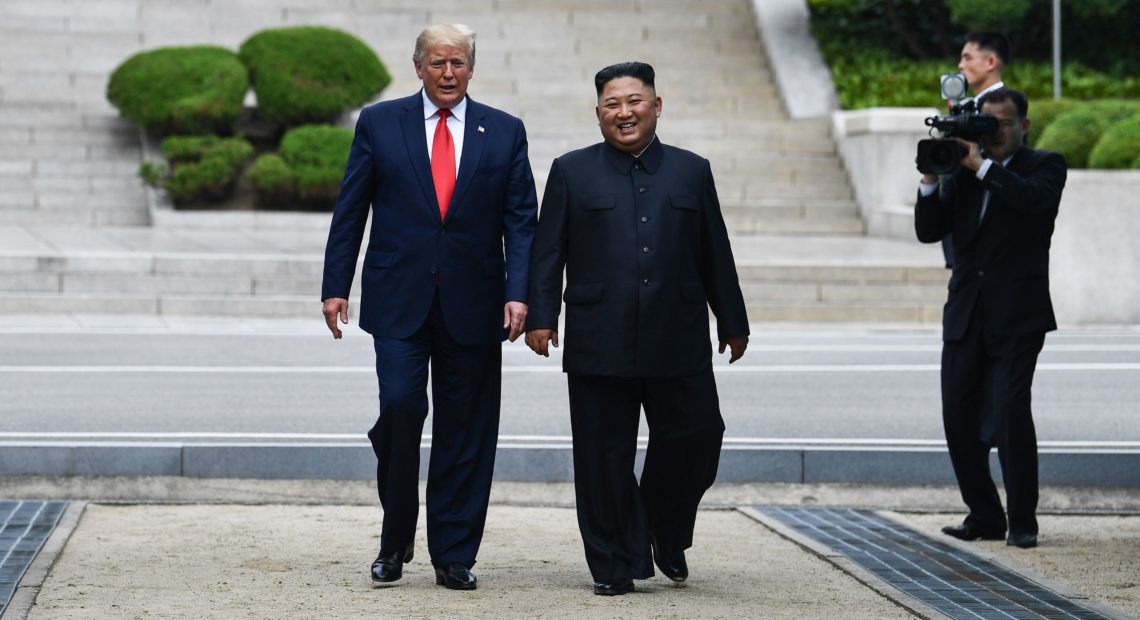 The meeting, held behind closed doors at the Demilitarized Zone that separates the two Koreas, lasted longer than Trump’s initial stated plan of simply shaking hands.

“I never expected to meet you at this place,” Kim told Trump through an interpreter as they greeted each other at the demarcation line. Trump walked with Kim a few steps into North Korean territory, where the two shook hands and posed for photos, before both crossed over into South Korea.

Trump said stepping over the demarcation line was “a great honor,” while Kim said the event “has a lot of significance because it means that we want to bring an end to the unpleasant past” and called it a “courageous and determined act.”

The two met privately in the building on the South Korean side known as Freedom House for about 50 minutes before Trump escorted Kim back to North Korea’s territory.

“The meeting was a very good one,” Trump told reporters afterward, saying with regard to nuclear negotiations, “We’re not looking for speed — we’re looking to get it right.”

He said the U.S. would be employing a designated team selected by Secretary of State Mike Pompeo to start work on new negotiations in the next few weeks, while North Korea would have a team as well.

Kim, through an interpreter, also offered a sunny assessment.

“I think it’s a meeting that demonstrates to many people that we can change for the better going forward,” he said.

South Korean President Moon Jae-in, standing next to Trump, said the meeting and future negotiations “presented a big hope” to the Korean people.

Trump also invited Kim to visit the United States “when the time is right.”

Trump said sanctions, which the North wants lifted and which were a sticking point in the second meeting between Trump and Kim, would remain in place, but Trump said he is “looking forward to taking them off.”

Earlier in the day in Seoul, Trump said, “We’ve developed a very good relationship, and we understand each other. I do believe he understands me, and I think I maybe understand him.”

The president initially described the meeting as only a brief encounter to shake hands. Trump proposed the get-together on Twitter on Saturday while he was in Japan.

He became the first sitting U.S. president to hold a summit with a sitting North Korean leader when he met with Kim in Singapore in June 2018. The summit ended with promises for North Korea to pursue denuclearization — but with little in the way of details on how to get that done.

Trump’s second summit with Kim, in Vietnam in February, ended early after the two could not reach an agreement on moving forward. Trump said Kim insisted that sanctions be removed before dismantling key nuclear programs, to which Trump said, “We couldn’t do that.”

After their talks fell apart, the future of nuclear negotiations grew uncertain. The situation became even more unclear in May, when North Korea was caught testing a short-range ballistic missile in violation of United Nations resolutions. The missile was capable of striking a target 150 miles away.

An additional strain exists around the subject of returning to the U.S. the remains of thousands of service members who died in the Korean War. The Defense Department ended its efforts in trying to recover the remains after military leaders said Pyongyang went silent on the subject.

Trump and Kim have since exchanged letters, which Trump has portrayed as evidence of a more productive relationship.

On Sunday, Kim said Trump stepping into North Korea, an act that critics of the president said was nothing more than a photo op, was indicative of something more significant, saying through an interpreter that it was “an expression of President Trump’s extraordinary determination to move beyond the bad past and open a new, good future.”

At the news conference earlier Sunday in Seoul, Trump and Moon were questioned about whether the meeting might help grease the wheels for a third formal summit between Trump and Kim on denuclearizing the Korean Peninsula, with the potential for the North to abandon its nuclear arsenal in exchange for a lifting of heavy international sanctions. Trump was uncharacteristically restrained about the notion. “Let’s see what happens today before we start thinking about that,” he said.