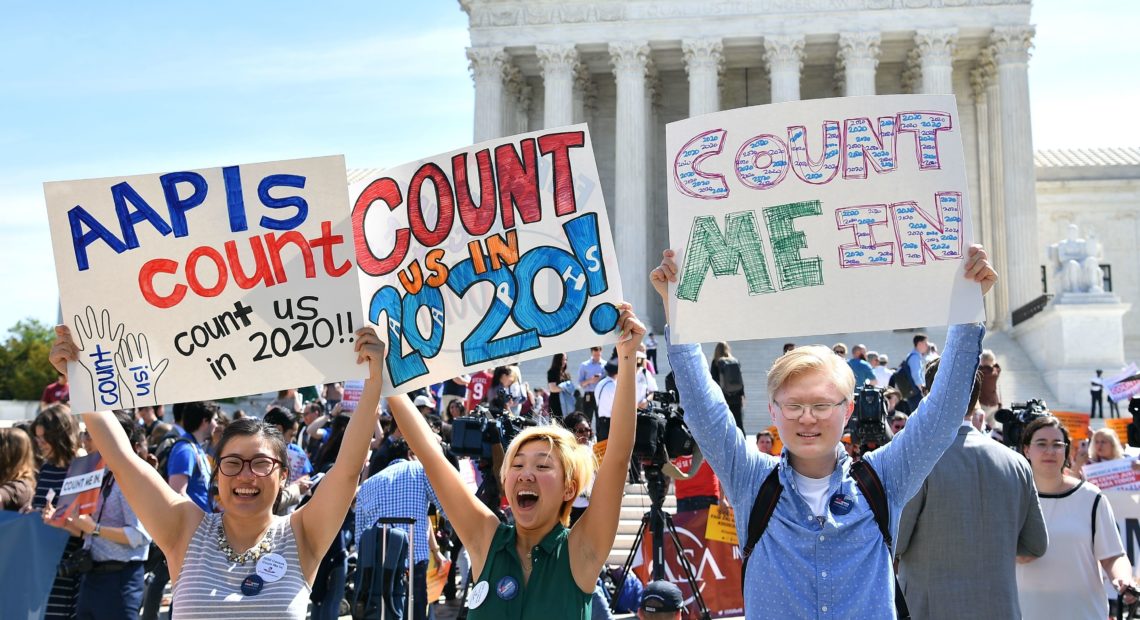 Hours after the Supreme Court ruled to keep a citizenship question off 2020 census forms for now, President Trump threatened to delay next year’s national head count.

Asked by a reporter for how long he would delay the census until a citizenship question is allowed, Trump did not give an answer.

It was yet another twist in a more than year-long battle over the still-blocked census question, “Is this person a citizen of the United States?”

This fight has spanned multiple fronts — from lawsuits in New York, Maryland, California, and Washington, D.C., to an ongoing congressional investigation. The results will have long-term consequences on how political representation and federal funding are shared in the U.S. over the next decade. 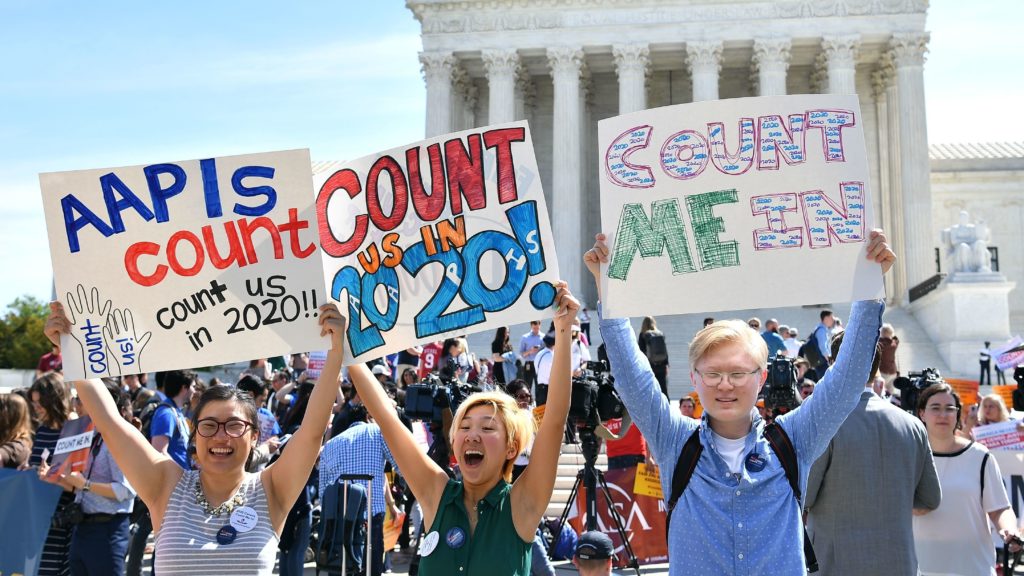 Demonstrators rally outside the U.S. Supreme Court in Washington, D.C., in April to protest the Trump administration’s plan to add a citizenship question to forms for the 2020 census.
Mandel Ngan/AFP/Getty Images

With days before the printing of paper census forms is scheduled to begin, here are the key questions looming over the count:

Will paper questionnaires for the 2020 census get printed on time?

The Census Bureau has said the printing of 1.5 billion paper forms, letters and other mailings is scheduled to start by July 1. But while testifying for the citizenship question lawsuits last year, Census Bureau officials said that “with exceptional effort and additional resources,” the deadline for finalizing forms could be pushed back to Oct. 31.

As recently as Tuesday, however, the Trump administration has reiterated in court filings the urgency to finalize by the end of June whether or not census forms will include a citizenship question.

It’s unclear if the administration’s position has changed since the Supreme Court released its ruling. During a teleconference Thursday for the Maryland-based lawsuits, Justice Department attorneys could not confirm the administration won’t try again to get a citizenship question onto the census, plaintiffs’ attorney Denise Hulett of the Mexican American Legal Defense and Educational Fund tells NPR.

U.S. District Judge George Hazel has given the administration until July 1 to share its plans before he decides if recently reopened lawsuits over discrimination and conspiracy claims against the question should continue.

The uncertainty over the census forms is putting pressure on the printing contractor, R.R. Donnelley & Sons. The Chicago-based company also produced forms for the 2010 count.

Donnelley has been waiting for weeks to receive files for one of two versions of the census form – one with a citizenship question, the other without.

A spokesperson for Donnelley has not responded to NPR’s inquiries since the Supreme Court ruling. But last week, the company’s president and CEO, Dan Knotts, said in a written statement that the company is “committed to delivering on the schedule” provided by the bureau.

But printing consultant Leo Raymond of Mailers Hub warns that any delays could make getting the job done even more difficult.

“It’s not just a matter of putting ink on paper,” says Raymond, who adds that the logistics of such a large printing and mailing order can be thrown off by unexpected shortages in workers or materials.

“You can throw money at it all you want,” Raymond says, “The presses run just so long. They can make just so many impressions and your bindery equipment can just fold and staple so much.”

Will the Trump administration come up with a new justification for adding a citizenship question?

The Supreme Court rejected the administration’s explanation that it wants a citizenship question to better protect the voting rights of racial minorities. In the majority’s opinion, Chief Justice John Roberts wrote that it was “a distraction” and “seems to have been contrived.”

But the high court also left open a window for the administration to try to make another case in court for adding the question. It is not yet known if they will try to do that.

But Judge Hazel wrote in an opinion released Monday that plaintiffs in the Maryland-based lawsuits have presented new evidence that “potentially connects the dots between a discriminatory purpose—diluting Hispanics’ political power” and the decision to add the question by Commerce Secretary Wilbur Ross, who oversees the Census Bureau.

That evidence was recently uncovered from the hard drives of Thomas Hofeller, a major Republican redistricting strategist who died in August.

Plaintiffs argue that an unpublished 2015 study by Hofeller shows that the administration actually wants responses to a census citizenship question that citizenship information to redraw voting districts that are, in Hofeller’s words, “advantageous to Republicans and Non-Hispanic Whites.”

If that is indeed the administration’s real reason for the question, Hazel indicated in his latest opinion he is prepared to strike it down.

“As more puzzle pieces are placed on the mat, a disturbing picture of the decisionmakers’ motives takes shape,” the judge wrote.

Can the census be delayed?

On Thursday, President Trump tweeted he’s asked “the lawyers if they can delay the Census, no matter how long” until the Supreme Court is “given additional information from which it can make a final and decisive decision” on the citizenship question.

The Constitution requires an “actual enumeration” once a decade of every person living in the U.S. Although the date of the Census Day has changed since the first U.S. head count in 1790, the census has never been delayed.

Since the 1930 count, federal law has set Census Day as April 1, although households in some parts of the country, including rural Alaska, are counted earlier.

Next year, the Census Bureau is legally required to report each state’s new population numbers by the end of December.

Pushing back the census could jeopardize the bureau’s ability to produce the count on time. That, in turn, would disrupt the scheduled redistribution of congressional seats and Electoral College votes based on the new census numbers.

A delay would likely also drive up the cost of what’s already expected to be the most expensive census in U.S. history at an estimated $15.6 billion.

Will the courts and Congress uncover more details about the Trump administration’s push for the citizenship question?

A federal judge in New York is preparing to review allegations this summer of a Trump administration cover-up of the real reason for the question. Plaintiffs in one of the New York-based lawsuits have accused a Justice Department official and a former adviser to Ross of giving false or misleading testimony before last year’s courtroom trial in Manhattan. The proceedings could turn up more internal documents and testimony by administration officials.

The House Oversight and Reform Committee is also digging into exactly why the Trump administration wants this question. The committee’s Democrats and Republican Rep. Justin Amash of Michigan recently voted to hold Ross and Attorney General William Barr in contempt of Congress for refusing to turn over full copies of internal emails and other documents about the question. The committee’s chairman, Rep. Elijah Cummings, D-Md., could escalate this standoff to the courts.

In the meantime, the committee has made more requests for documents and interviews to other officials, including a high-ranking Census Bureau official who emailed Hofeller about a citizenship question in 2015.

Will citizenship information be used to redraw voting districts after the 2020 census?

Plaintiffs in the New York and Maryland lawsuits argue that Hofeller’s files show the real reason the Trump administration wants a citizenship question — to have the kind of information needed to give Republicans and non-Hispanic white people a political advantage when new political maps are drawn after next year’s head count.

That information could be available to state and local redistricting officials even if a citizenship question is not allowed on census forms. That’s because Ross approved not only adding the question but also the compiling of existing government records on citizenship by the Census Bureau.

At a public meeting in May, the bureau’s Chief Scientist John Abowd said that the agency has been preparing to release that citizenship information based on the records and is waiting for Ross’ “guidance” on what to do next.

Will all of the attention on the citizenship question drive down census participation, especially among immigrants and communities of color?

Many community and other advocacy groups are worried the citizenship question issue has dominated most of the public’s awareness of the 2020 census. That could heighten fears of taking part in the count amongst immigrants and communities of color – two of what the Census Bureau considers the hardest-to-count groups in the country.

The bureau’s own research has shown that many immigrant groups see the question as a tool for the government to find unauthorized immigrants.

“Every single scrap of information that the government gets goes to every single intelligence agency, that’s how it works,” a focus group participant of Middle Eastern or North African descent told the bureau’s researchers.

Federal law prohibits the bureau from releasing census responses identifying individuals to other federal agencies and to the public until 72 years after the information is collected. But the bureau is also facing high levels of public distrust of the Trump administration at a time of increased immigration enforcement and growing anti-immigrant rhetoric.

In the meantime, as the citizenship question’s fate remains in limbo, the government is currently conducting an experiment by asking around a quarter million households to complete test forms that include the question.