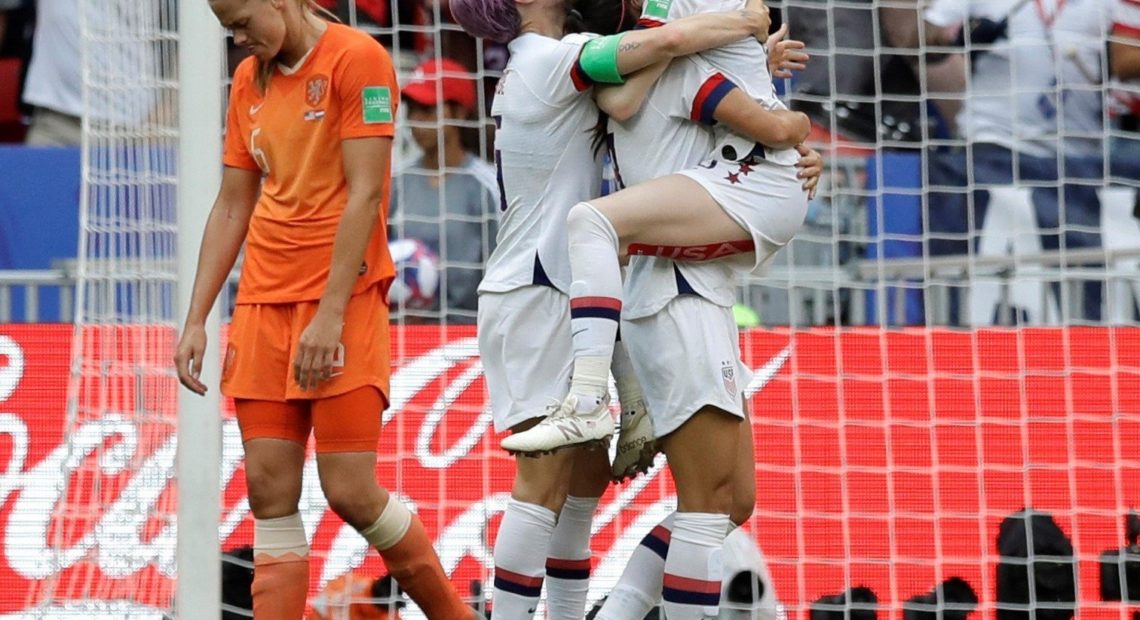 PHOTO: Netherlands’ Anouk Dekker, left, walks past as United States’ Rose Lavelle, right, celebrates with teammates after scoring her side’s second goal during the Women’s World Cup final soccer match between U.S.  and The Netherlands at the Stade de Lyon in Decines, outside Lyon, France on Sunday. CREDIT: Alessandra Tarantino/AP

The U.S. Women’s Soccer team is still the world’s best after dominating the Netherlands in the Women’s World Cup final and winning 2-0. Throughout the tournament, the U.S. brushed aside criticism, complaints of arrogance and calls for the team to tone down their goal celebrations. All the team did was win. All seven World Cup games in fact.

In the first half, the U.S. created more chances than the Netherlands. The Americans attacked and attacked but the Dutch defense and, particularly, the goalkeeping of Sari van Veenendaal who blocked four shots, kept the U.S. from scoring for the first time in an opening half this tournament.

The sell-out crowd at Stade de Lyon in Lyon, France, decked out in red, white and blue … and orange, cheered and cheered and sweated it out with nervous fans watching around the world. Before the final, neither team had trailed or lost a game in this tournament. Both squads had each only permitted a total of three goals. The Dutch got better as the tournament progressed — keeping their opponents from scoring in each of the knockout games before the final.

The U.S. made one change at halftime, replacing Kelley O’Hara with Ali Krieger. O’Hara knocked heads with Lieke Martens late in the first half. The collisions continued in the second half. Becky Sauerbrunn was knocked to the turf, blood trickling down her face. She returned with black tape wrapped across her forehead. 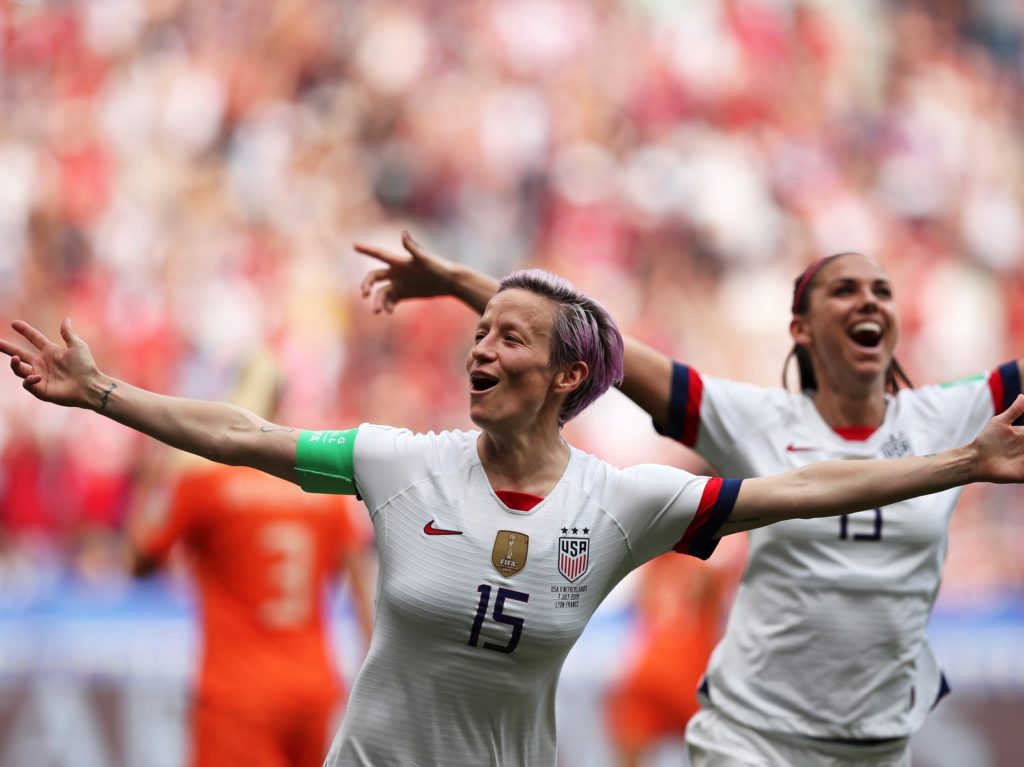 United States’ Megan Rapinoe celebrates after scoring the opening goal from the penalty spot during the Women’s World Cup final soccer match between U.S. and The Netherlands at the Stade de Lyon in Decines, outside Lyon, France on Sunday.
CREDIT: Francisco Seco/AP

The breakthrough for the U.S. came in the 61st minute. As forward Alex Morgan streaked in front of the Dutch goal, defender Stephanie van der Gragt tagged Morgan’s shoulder with her right boot. A penalty kick was awarded after video review. Megan Rapinoe cooly slapped the ball into the back of the net. It was her third converted penalty and sixth goal of the tournament

The U.S. scoring continued in the 69th minute thanks to midfielder Rose Lavelle. She dribbled down the field and with a beautiful left-footed strike at the top of the penalty area, zipped the ball low and to the right. 2-0 It was all the scoring the U.S. would need.

Thailand (13-0), Chile (3-0) and Sweden (2-0). Brushing aside criticism about perceived arrogance and excessive goal celebrations, the U.S. then powered through the heart of European soccer with victories over Spain (2-1), France (2-1) and England (2-1) to make it to the final against the reigning European champions.

It was the fifth time the United States Women’s National Team played a World Cup final (there have only been eight tournaments). The U.S. is the first team to reach three consecutive finals and joins Germany as a repeat champion (2003 and 2007). With the win, the U.S. has a record four Women’s World Cup trophies.

On a day that should have been all about the World Cup, the United States had to share the soccer spotlight. “It’s ridiculous,” said Megan Rapinoe that there are not one but two men’s soccer championships scheduled today: the Copa América and CONCACAF Gold Cup. “That’s a terrible idea to put everything on the same day in every way. This is the World Cup final. This is ‘cancel everything day,'” said Rapinoe. Soccer’s governing organization, FIFA, said having all three tournament finals will draw attention to the sport.

The U.S. team will return home to adoring crowds and fans and a new fight. In March, the U.S. Women’s National Team sued U.S. Soccer for gender discrimination. In the lawsuit, the team claimed the soccer federation pays them far less than similarly situated members of the men’s team. A men’s team that has had nowhere near the success of the women on the international stage. Both sides agreed to mediation after the tournament.

Record audiences have tuned in for this tournament in the United States and around the world. Will this exciting tournament translate into continued growth of the women’s game? “Your hope is back in the U.S. more kids want to go out and play this great sport,” said U.S. Head Coach Jill Ellis, “I mean that’s ultimately the building block you build on. My hope is that more people get on board financially. You know sponsors they see the value in it. They see the marketing marketability of it and then more little kids want to go and kick a ball around.”