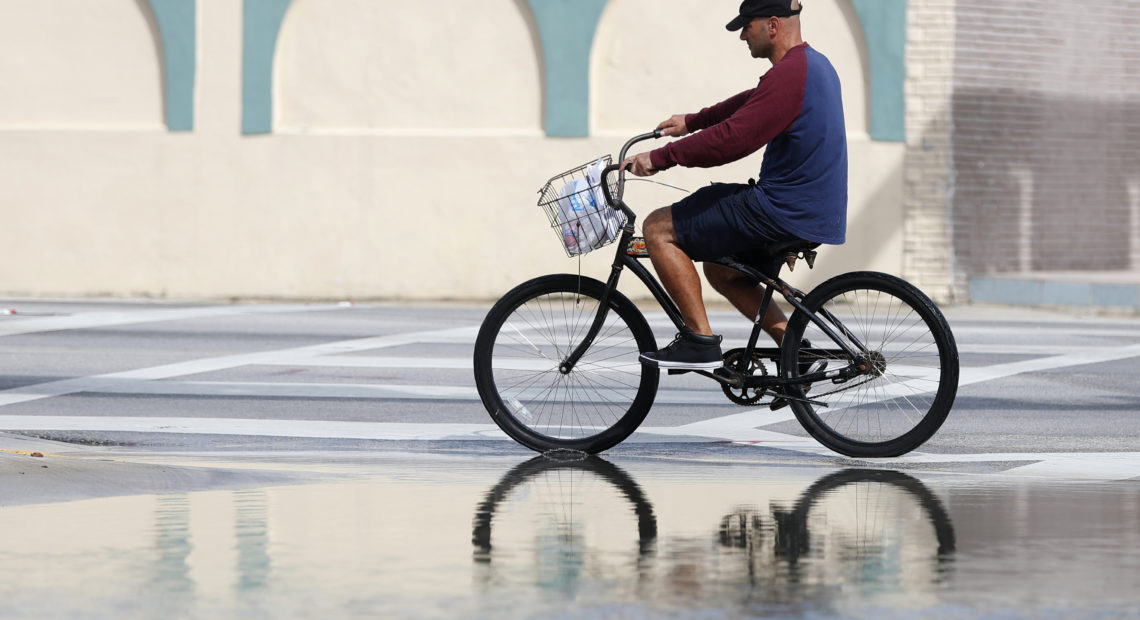 High-Tide Flooding On The Rise, Especially Along The East Coast, Forecasters Warn

Sea levels are rising, and that is sending more ocean water into streets, sewers and homes. For people who live and work in coastal communities, that means more otherwise-sunny days disrupted by flooding.

“Really the future is now in terms of sea level rise impacts,” says William Sweet, an oceanographer for the National Oceanic and Atmospheric Administration. Average sea levels have already started rising as a result of global climate change. “The ocean is at the brim. It’s clogging storm water systems and it’s spilling into streets.”

“Flood risk is not the same everywhere,” says Sweet. “There are a lot of wet spots emerging, and they’re getting worse, deeper, more widespread at a fairly rapid clip.”

While West Coast and Gulf Coast cities including San Diego, Seattle, Galveston and Houston are being affected, the biggest increases in flood risk are concentrated on the East Coast.

In 2018, 12 communities broke or tied their previous records for the number of days with high-tide flooding, some with more than 20 days of storm-free flooding, according to the report. All were on the Eastern seaboard, from Massachusetts down to Florida.

“It has a very active coastline: the water moves when the winds or the ocean currents change,” he says. “All of this is creating a situation where high-tide flooding — which is a direct result of sea level rise — is becoming apparent and more problematic throughout the coast.”

That has local officials and urban planners rethinking how they engineer the those communities, budget for flooding and communicate flood risk to their residents.

In Annapolis, Md., where high-tide flooding is quickly becoming a chronic problem, the city plans to upgrade storm drains, raise roads and install pumps to keep low-lying areas dry. A study published earlier this year estimated high-tide flooding in one part of the city in 2017 cost businesses about $100,000 in lost revenue.

The government in nearby Baltimore, Md., has joined cities in Florida and Texas in issuing flood-proofing guidance for residents living in areas prone to invasion by ocean water.

In Charleston, S.C., rising seas have combined with more extreme rain events — a phenomenon also exacerbated by climate change — to create a chronic flooding problem in the city, which sits on a low-lying peninsula.

“The entire peninsula is really affected,” says Katie McKain, Charleston’s director of sustainability. She says in the summer, flooding is often forecast once a week, which means it’s a big part of what her office is dealing with on a daily basis. Every time there’s possible flooding, public alerts need to be sent out and the police department has to close roads that are underwater.

“It’s difficult,” she says of the chronic road closures. “Having the personnel to do it is a challenge.”

“We’re planning for 2-3 feet of sea level rise over the next 50 years,” says McKain. “It’s just something we’re getting ingrained in everyone’s heads.”

The city is also thinking long-term about how to adapt to future tidal flooding. Charleston’s chief resilience officer, Mark Wilbert, has brought in engineers and planners from the Netherlands to help develop new infrastructure. The city is upgrading some sewers, installing valves to help keep out ocean water during particularly high tides.

Wilbert says NOAA and National Weather Service reports, such as the one published today, are some of the most important forecasting tools available to his team. He needs to know how many days of tidal flooding to expect next year, and how the trend is changing in the coming decades.

“That’s really about budgeting,” he says. “We’re going to have to respond to each of these, [and] we’re going to need resources to meet what the expected demand will be.”

Boston, Mass., which experienced a whopping 19 high-tide flood days last year, has been struggling to keep up with the risks posed by rising seas. Much of the city was built on earthfill more than 100 years ago.

“At the time they were filled, sea level rise wasn’t something that anyone contemplated,” says Stephanie Kruel, an environmental planner at the Boston engineering firm VHB. She says the city’s commercial and financial districts and “even city hall itself is very low lying.”

Boston has a sweeping plan to raise roads and expand waterfront parks to help keep the water out. Kruel says Boston is also in the midst of updating its zoning laws to require new buildings in low-lying areas to have raised first floors.

While elevating buildings is relatively simple from a purely engineering standpoint, higher first floors create a variety of other urban design issues that planners like Kruel are thinking about.

For example, raised buildings need ramps or elevators for strollers and people who use wheelchairs. And raising a handful of buildings in a flood-prone neighborhood doesn’t necessarily make the area less vulnerable overall.

“If one or two buildings are raised up high, that’s great for them, but it doesn’t really help the whole area,” explains Kruel. For example, the road may remain at a lower elevation while buildings are raised, cutting people off inside their homes or businesses.

“What happens if a building becomes kind of ‘islanded’ by a flood, where the building itself is fine and it can recover quickly, but the whole area around it isn’t prepared?” she points out. “You know, something is only as strong as its weakest link.”

Sweet, of NOAA, says high-tide flood forecasting is a critical part of such long-term planning decisions. Reports like the one published today provide basic information to every coastal community, including smaller towns that may not have the engineering resources that major cities do.

“I live at the coast, I get it. It’s a great place to live,” says Sweet, who lives in Annapolis, Md. “It’s just a hard thing to get right when the water levels keep moving. So that’s what we’re trying to do, is give communities the best information to make smart decisions.”