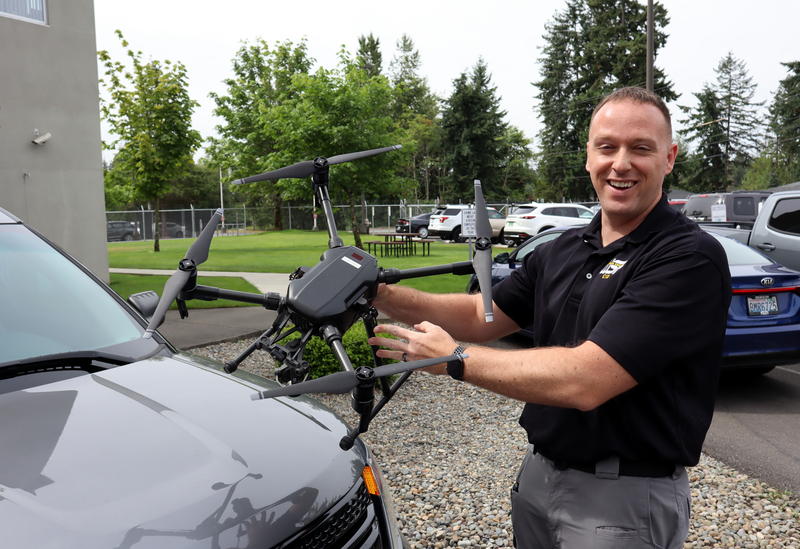 In the span of just a few years, the Washington State Patrol has built up a fleet of more than 100 drones. At last check, the Oregon State Police had three. The Washington patrol says its small quadcopters are used for crash investigations, not for surveillance.

Thomas said the patrol has acquired 111 drones made by DJI, some of which are higher-end consumer models. Others are a more robust commercial enterprise model. The state may upgrade and further expand its fleet with a fresh infusion of cash recently approved by the state legislature.

Thomas said his agency limits the use of the remotely-piloted eyes in the sky to pretty much one job: documenting serious crashes and fatality scenes.

“We’re making a big difference in the time that we take to document that scene and get the roadway clear,” Thomas said in an interview in Tacoma Tuesday. “It’s a little more work on the back end in the office putting it together through the software, but you’re saving a lot of time out on the roadway. That was the driving force — to save time on the freeways, getting those cleared up to get traffic moving again.” 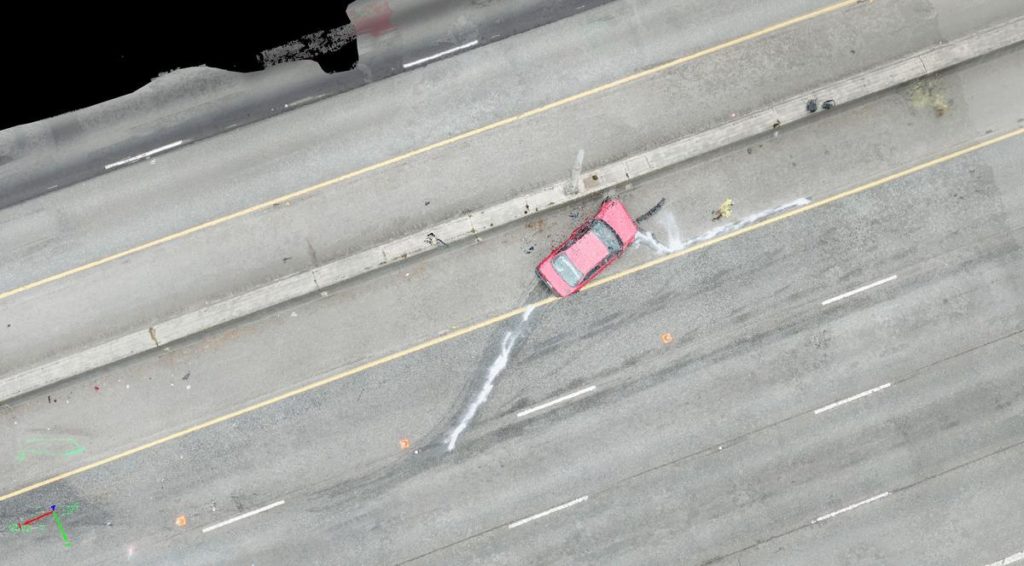 Screen shot from a 3-D crash scene model made by combining multiple still photos taken by one of the state patrol’s drones. CREDIT: WSP

Thomas said a compact two-car collision scene can be mapped in ten minutes with a drone compared to a half-hour to an hour using traditional methods such as with a tape measure, chalk marks or laser scanner.

Many local police departments and the Oregon State Police deploy drones for a wider range of purposes including observation of armed, barricaded suspects and search and rescue. Thomas explained the Washington State Patrol is deliberately taking a more limited approach to “get off on a good foot.”

Thomas said any uses besides collision and crime scene mapping, such as possible deployments to assist with wildfire monitoring this summer, will require the personal approval of the chief of the state patrol.

“We’re not allowed to take video or use it for surveillance,” Thomas said, elaborating on the agency’s written policies. “We’re very strict in how we run our program. Essentially, we’re just taking baby steps.”

Viewed another way, the Washington State Patrol drone fleet appears to be one of the largest, if not the biggest by far, owned by a state or local government anywhere in the country. A study on public safety drones published last year by the Center for the Study of the Drone at Bard College identified the Polk County Sheriff’s Department in Florida as having the greatest number at the time of its survey. That sheriff’s department operated 20 drones.

Privacy watchdogs such as the American Civil Liberties Union are closely monitoring the rapidly increasing numbers of law enforcement drones. The Washington State Patrol said it consulted with the ACLU state chapter as it developed its limited-use drone policy.

ACLU of Washington Technology and Liberty Director Shankar Narayan has been critical of some city police departments for not having clear enough guidelines to prevent warrant-less flyovers or lacking restrictions on data sharing.

In an interview with public radio Tuesday, Narayan said greater transparency is needed around surveillance technology. He said he is worried about “mission creep” since drones have the capability to collect a lot of information.

“Even if the Washington State Patrol has the best policy in the world, an average person has no recourse in order to enforce it,” Narayan said.

State drone laws exist in Oregon and Idaho, but not in Washington state — though not for lack of trying. The Washington Legislature and Gov. Jay Inslee have not seen eye to eye about how permissive or restrictive to be, which resulted in Inslee vetoing a bill to establish a drone policy for state government in 2014. Individual agencies are setting their own policies now for permitted uses, privacy