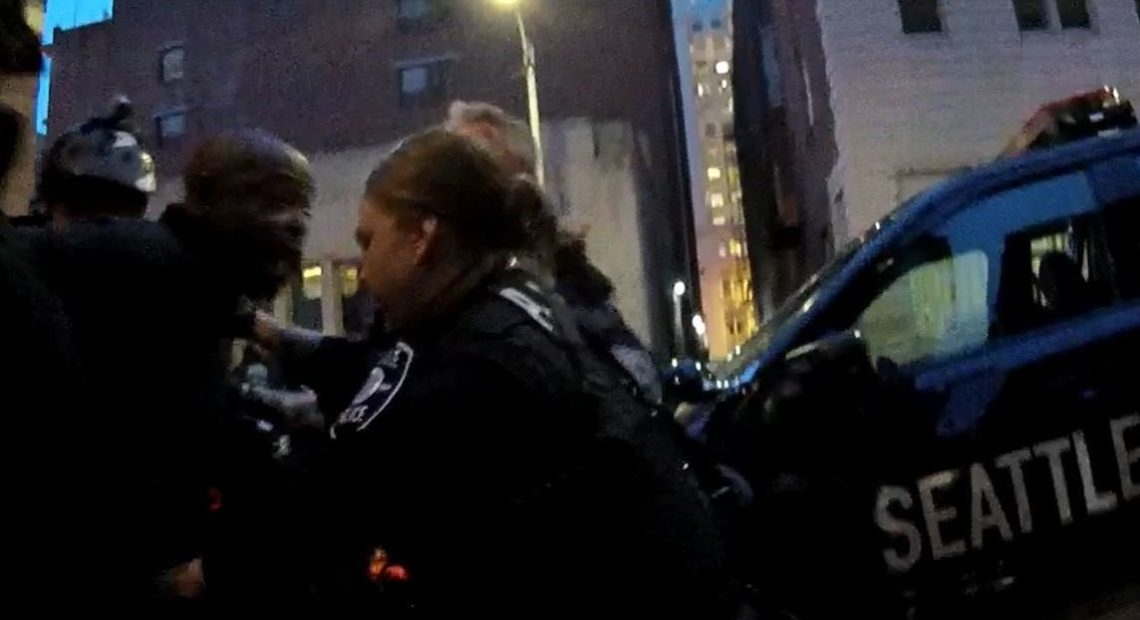 Seattle is grappling with a crisis of what is sometimes called “visible homelessness” — people who live in the street and struggle with mental illness or drug addiction. It’s a population that often commits small crimes, such as disorderly conduct or shoplifting to pay for drugs. And public frustration is growing.

Some accuse a reform-oriented local criminal justice system of becoming too tolerant.

These critics point to examples such as a man with mental illness who was arrested in March for trying to throw a woman off a bridge. It turned out he’d already been arrested three times in the previous three months for random attacks on strangers and throwing a computer terminal at the library. 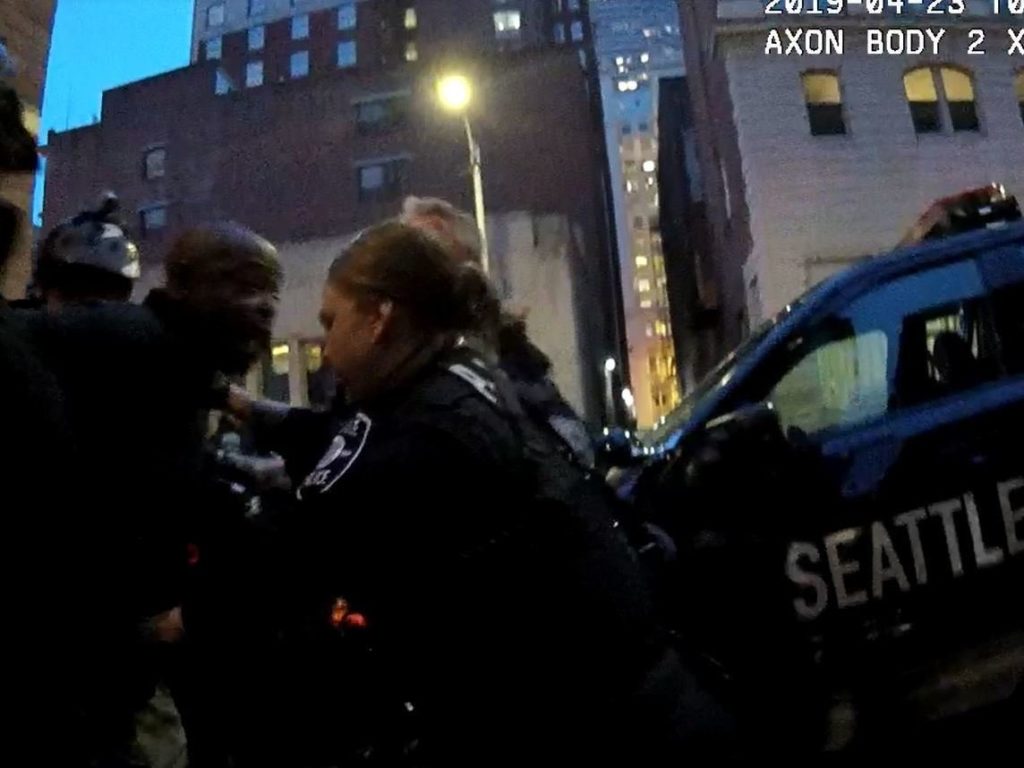 In this incident in April, captured on a police officer’s body camera, it took nearly two hours of negotiations and at least a dozen police officers to safely subdue a man with mental illness who had taken over an alleyway. Courtesy of city of Seattle

He didn’t face serious criminal penalties for those previous incidents, in part, because of his mental health status.

In April, body cameras on the Seattle police officers captured an encounter with a man who had claimed a downtown alleyway and was chasing people away with a drain pipe. It took nearly two hours of negotiations involving more than a dozen police officers to safely subdue him.

Public frustration with the “visible homeless” found its voice in a recent hourlong special called “Seattle is Dying,” by ABC affiliate KOMO-TV. It focuses on the debris of tent camps near downtown and the behaviors of people with mental illness and drug use.

The video refers to “lost souls who wander the streets, untethered to home, or family, or reality” and city residents who feel compassion, “but who no longer feel safe.”

The video was criticized for being melodramatic and exaggerating the problem, but it struck a nerve and has become part of the city’s political discussion. Candidates for local office are now routinely asked whether they think Seattle is indeed “dying.”

Even a judge weighed in. At a forum sponsored by the Downtown Seattle Association, Municipal Court Presiding Judge Ed McKenna faulted prosecutors for pulling their punches when dealing with crimes committed by drug users and people with mental illness.

He said it’s “frustrating” when prosecutors hold back, because it means the criminal justice system has less leverage over these repeat offenders.
“So, for instance, a prosecutor could say: ‘If your client wants to do in-patient treatment, we’ll order him to a secure in-treatment facility. If he doesn’t want treatment, we’ll ask for a whole lot more jail,” McKenna said. “‘Which choice would your client like?'”

But that style of prosecution is out of favor in Seattle now. The county attorney is no longer charging people for possession of small amounts of drugs — even heroin and meth — and City Attorney Pete Holmes doesn’t believe in “the old way” of doing things.

In April, Holmes joined public defenders in an open letter criticizing Judge McKenna for overstepping his role, as they saw it, and trying to get prosecutors to come down harder on offenders.

“Prosecutors have been uniformly criticized for piling on of charges, asking for maximum statutory sentences when they know that those are either inappropriate or just simply not in the best interests of public safety,” he said at the time.

In an interview at the time, Holmes said, “What we’re really talking about is to say, ‘Just put ’em in jail. And at least that offender will be out of sight and out of mind for a defined period of time. Not receiving treatment, but at least out of the public view.'”

But Holmes said he also thinks the public’s “consternation” over the situation in Seattle’s streets is pointing toward a deeper problem.

“We’re finding out that the system is really at its maximum. I think the judge and I even agree on that — that those services really are at their limit,” Holmes said.

There’s a high bar for courts to commit someone to involuntary mental health treatment, and lower-level, outpatient treatment is hard to come by. So even if prosecutors exercised more pressure on these defendants, Holmes asked, “to what end?”

One example of this is the city’s municipal mental health court. The product of an earlier wave of criminal justice reform, it offers defendants with mental illness an alternative to mainstream court. It drops charges for those who agree to two years of close monitoring and treatment. But lately there has been less incentive for defendants to go this route, because the court lost the ability to offer them housing as part of the deal. Funding for the court’s housing program was redirected to the city’s larger homelessness effort.

Holmes said the public is now seeing for itself the results of a long-unsolved problem of what to do with people who have mental illness.

As jails and prisons are becoming less likely to house such people, Holmes said he hopes the public will start to see — and recognize — the unsolved problem of the lack of mental health treatment.