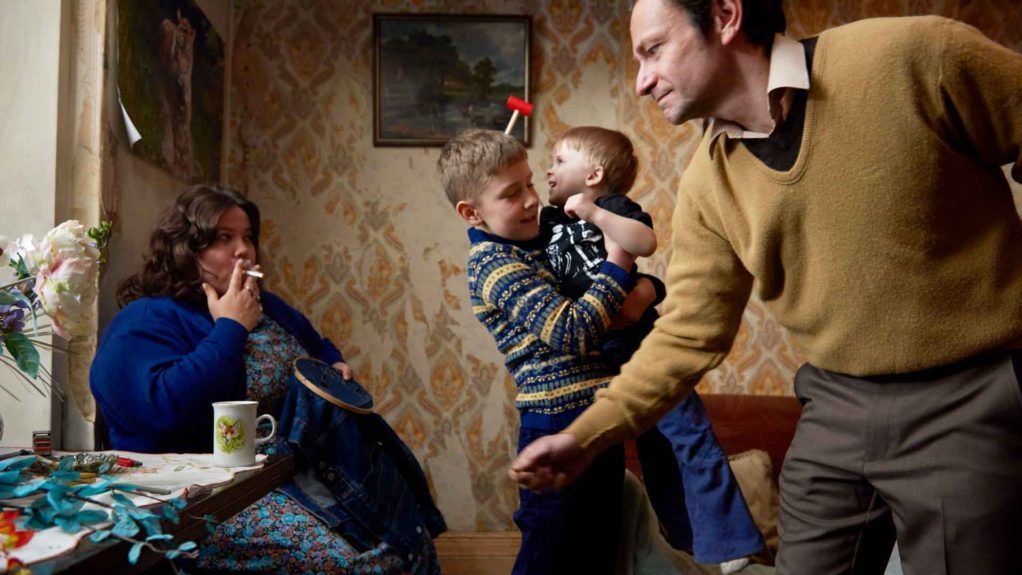 FILM REVIEW: ‘Ray & Liz’ Is A ‘Melancholic And Unsparing’ Portrait Of A Household At Society’s Edge

Richard Billingham grew up in a squalid tenement home in Thatcher-era Britain, in a region outside Birmingham commonly referred to as the Black Country. And true to its name, his upbringing was the blackest of circumstances. Billingham and his younger brother Jason wrestled with an alcoholic, withdrawn father and a violent, short-tempered mother, both habitually unemployed: a household constantly perched on the edge of chaos.

For years Billingham has examined the scenes of his childhood in acclaimed photography, documentary film, and other projects, but now he takes us even further into his world with his first narrative feature, the melancholic and unsparing drama Ray & Liz. The film is filled with deep pain and mesmerizing details of what it’s like to grow up in poverty and neglect, focusing less on the hardships the family faced than on how they passed the time.

For the adults, that means filling their days with sleeping and smoking, though the heavily tattooed Liz (the fantastic Ella Smith) also cherishes her jigsaw puzzles, and the sullen Ray (Justin Salinger) his unmarked plastic bottles of murky brown homebrew. One thing they barely concern themselves with is the well-being of their children, particularly Jason, who’s put in danger at multiple stages of his life. We often say art “cuts close to the bone,” but in its depiction of clinking liquor bottles and drawers of unopened rent notices soaked in dog urine, Ray & Liz slices clean through that bone.

Shot on film to better capture the setting’s grimey palette, the movie is told in standalone episodes lifted directly from the writer-director’s own memory, although Richard himself barely factors into them. In an early passage, Jason is a toddler left in the care of an uncle to disastrous ends; later, a school-aged Jason (Joshua Millard-Lloyd) desperate to escape his home life will spend a winter night alone in a garden shed. These scenes are bookended by glimpses of Ray in his old age (Patrick Romer), lying alone in his filthy bedroom for days on end, pouring himself bottomless glasses of that homebrew. “What day is it?” he yells down to Liz in the street, like Scrooge in A Christmas Carol.

Though it’s set in the late 20th century, Ray & Liz feels like a throwback to a postwar British genre: the “kitchen sink drama,” in which playwrights and filmmakers would tackle the class struggle from every conceivable angle. Billingham tries to limit this story to his own memories, stripping context from his parents’ misfortunes like the wallpaper stripped from his flat’s stuffy beige corridors: we don’t know how they got this way or whether they’re trying to make things better. But the more the film boxes us into its specific mindset, the more we register when the outside world intrudes in the form of social services come to check on the kids, or an observer of the family who knows exactly how to manipulate their worst tendencies to his own ends.

As we grow to understand these characters and their place in the universe, Billingham cuts to close-ups of the dogs, rats, snails, flies, and various other creatures who inhabit this space with them. In this way a spiritual connection is formed between the humans stamped out of their own society and the animals who prowl the edges with them. Liz is quick to raise a fist to her own blood, as though a more orderly life were something she could threaten into existence, but later we see her gently pushing a rabbit through the park in a baby stroller, and we reflect on how easy it can be to misdirect even the most basic feelings of kindness. Through her mannerisms, her impulsive anger at her family that gives way to a resigned calm once she finds a distraction, Smith makes Liz into a tragic figure without a firm grasp of time, responsibility, or even her own personhood.

For outsiders to Billingham’s life (meaning, er, all of us), there’s a twinge of sadism to the film. It takes minutes of screentime for a man to knock back drink after drink, sealing this family’s fate in the process, and the natural question is: Why watch this? After all, in the director’s original photography series, Ray’s a Laugh, the frank visual compositions of his father’s home life did all the narrative work. You could look at his shirtless body, slumped over on a couch as he ate a TV dinner with the dog curled up next to him, and you’d understand a lot already. But this transition into the moving image does give us a better feel for Ray and Liz as people, not just as talking points for welfare debates. We see how easy it was for them to withdraw from a world that cut them no breaks; the occasional flashes of pride they insisted on holding; and their too-late realization that an aimless life is no kind of life at all. Billingham has used his art career to grant dignity to his folks, to tell us that they were here. Maybe that’s enough.