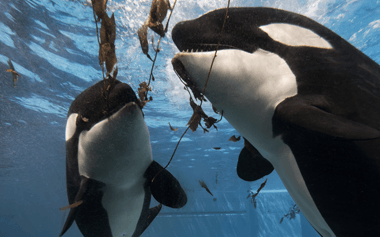 An environmental nonprofit is gauging interest in the creation of an orca enclosure in Washington’s San Juan Islands. The organization is hosting public outreach meetings over the coming week in six Western Washington locations.

The leaders of the Whale Sanctuary Project say a cordoned-off bay or cove somewhere in the San Juan Islands could be the ideal home for orcas retired from theme parks. It also could serve as a rehabilitation site in the event government biologists temporarily corral an ailing wild orca for treatment. But the sanctuary idea is drawing flak from some quarters, and a brush-off from the current owners of captive killer whales.

“We need a community to embrace our vision in order for this to work,” said Lori Marino, founder and president of the Whale Sanctuary Project, in an interview with public radio. “We don’t want to be anywhere where it is not embraced.”

SeaWorld parks said it has no interest in turning over its captive orcas to the Whale Sanctuary Project. MIKE AGUILERA / SEAWORLD SAN DIEGO

Over the past couple years, the sanctuary team scouted the Washington state, British Columbia and Eastern Canada coasts looking for sites of 60-100 aquatic acres with quiet surroundings and nearby utilities for the staff facilities. The goal is to secure a natural setting where former show orcas could live out their lives with higher quality of life than in a small, concrete tank.

In particular, whale lovers in the Pacific Northwest have long wanted to bring home the last surviving captive orcas of the many taken from the Salish Sea in the 1960s and ’70s. A Southern Resident killer whale named Lolita (also known as Tokitae) lives at the Miami Seaquarium and a Northern Resident named Corky is in SeaWorld’s care.

The Miami Seaquarium’s ownership has steadfastly refused entreaties to consider retiring Lolita, their sole orca, to her natal home. SeaWorld holds 20 orcas, the majority of whom were born in captivity, at three theme parks in Orlando, San Antonio and San Diego.

“Putting them in a sea pen introduces a tremendous level of risk,” Dold said in an interview Friday. “Environmental changes, weather, potential harmful algal blooms, potential infectious diseases of which our whales would not have been exposed to — not having grown up in that environment.”

Dold insisted the orcas in his care “have great lives and receive the utmost of care” and contribute to scientific understanding for killer whale conservation.

The principals in the Whale Sanctuary Project said they are confident the attitudes of orca owners like SeaWorld will evolve in due course. The nonprofit’s plan is to establish their sanctuary first, then make agreements to receive suitable orcas.

“The ethic around keeping whales in captivity for performance purposes has really shifted,” said sanctuary project executive director Charles Vinick. “We have to move forward and acquire the site so there is a facility fully staffed and ready to accept a whale from a captive facility.”

The Whale Sanctuary Project board and staff includes people who helped return the orca Keiko, the star of the movie, “Free Willy,” to Icelandic waters from Newport, Oregon. The advisory board also includes environmental luminaries such as explorer and oceans advocate Jean-Michel Cousteau, oceanographer Sylvia Earle, and OrcaLab co-director Paul Spong.

One figure not on board is the director of the Seattle-based orca advocacy group, The Whale Trail. Donna Sandstrom said she is alarmed by the possibility that nonnative whales could be released into a saltwater net pen in Puget Sound. She said this creates risks of disease transmission to the endangered native population. Sandstrom also wondered if resident orcas might hear the calls of nonnative orcas and decide to stay away.

“With all the threats facing the Southern Resident killer whales, putting nonnative cetaceans in the heart of their range is about the most foolhardy thing I could think of,” Sandstrom told public radio.

Vinick responded that the proposed refuge enclosure will have quarantine areas to prevent pathogens from passing back and forth.

Multiple government bodies would be involved in permitting an orca sanctuary once the nonprofit settles on a final location to submit for approval.

“We are interested but reserving judgment until we know more about it,” NOAA Fisheries spokesman Michael Milstein said in an email.

Last summer, Milstein said NOAA seriously considered capturing a sick and starving member of the critically endangered Southern Resident killer whale population. The orca, named J50, went missing before a rescue operation could be launched; she is presumed dead. The Whale Sanctuary Project was one of many outside groups the federal government consulted along the way last year. On Friday, Milstein said he would not speculate whether the rescue and rehab route might be considered again for other orcas in declining condition.

The six public meetings hosted by the Whale Sanctuary Project — during which the group will present its vision and solicit feedback — begin with a town hall at an Olympia hotel on Tuesday night. From there, the project leaders will go to Gig Harbor, Seattle, Friday Harbor and Eastsound, before wrapping up on Lopez Island on July 24.

The Whale Sanctuary Project also is looking to establish a facility on the East Coast, which could focus on caring for retired captive beluga whales. Marino said a series of public outreach meetings earlier this year in Nova Scotia provided an encouraging response to pursue that initiative.

All events start at 7 p.m. unless otherwise noted. Doors open 30 minutes before each event.