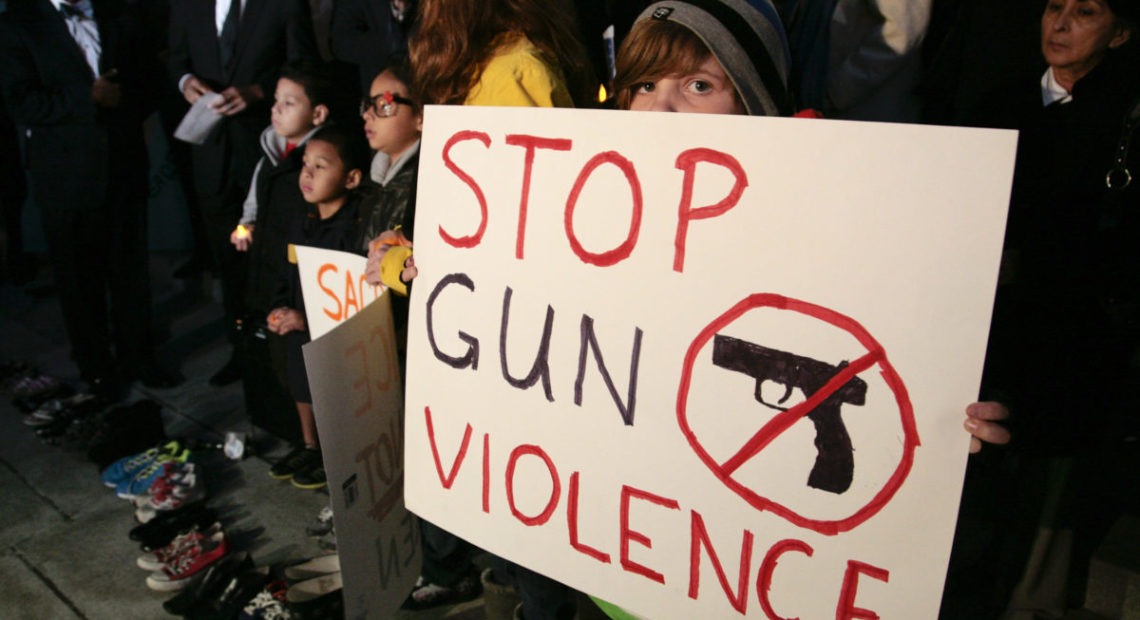 There may be a connection between tougher gun laws and fewer child fatalities from firearms, a new study suggested Monday. The study, published in the journal Pediatrics, says states with universal background checks report fewer children’s deaths due to gun incidents. However, more data is needed to understand the relationship between firearms and public health, and to conclude whether such laws save lives, the study maintains.

What did the study find?

According to the study, 21,241 children died due to firearm use between 2011 and 2015, based on federal data from the Centers for Disease Control and Prevention. That produces a firearm-related fatality rate of 4.65 per 100,000 U.S. children.

The experience of treating young patients for gunshot wounds compelled the study’s lead author Monika Goyal to explore ways to decrease the rate of incidents. Goyal is a pediatric emergency medical physician at Children’s National Medical Center in Washington, D.C. 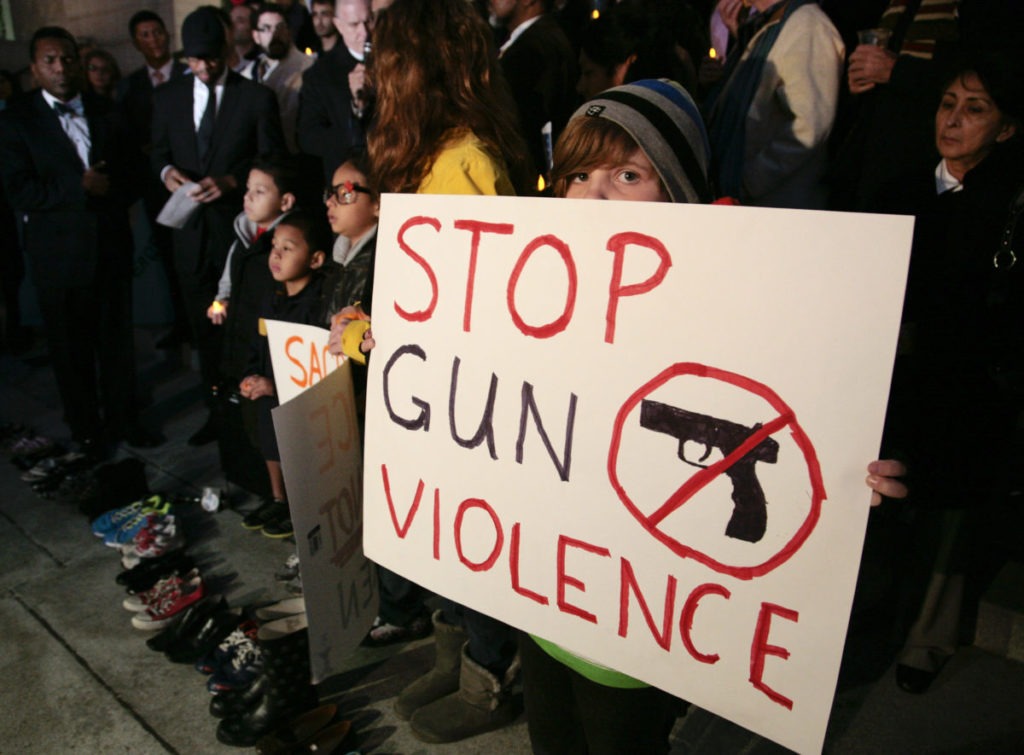 A demonstrator holds a sign during an interfaith candlelight prayer vigil to end gun violence in front of Los Angeles City Hall in Los Angeles, December 19, 2012. A gunman killed 20 children and six adults in a shooting rampage at Sandy Hook Elementary School in Newtown, Connecticut on December 14. CREDIT: Jason Redmond/Reuters

For this study, Goyal analyzed the Gun Law Scorecards from the Brady Campaign to Prevent Gun Violence, an advocacy group that supports stricter gun laws. According to the scorecard, the stricter a state’s gun law, the higher its ranking.

Goyal also assessed laws that have been linked to lower death rates for adults and children, including required microstamping or ballistic fingerprinting to identify firearm owners, as well as universal background checks to purchase firearms and ammunition. Currently, 12 states have background-check laws in place that kick into effect when someone tries to buy a gun, according to the Giffords Law Center to Prevent Gun Violence.

Among states with universal background checks, Goyal said the study suggests a 35-percent drop in child firearm fatality rates compared to states without those laws.

“Firearm injury is completely preventable,” she said in an email statement to the PBS NewsHour. “Our children deserve to be able to play in their neighborhoods, go to school, and sleep in their homes without fear of losing their life to a bullet.”

The study had some shortcomings, in part due to a lack of comprehensive data about American gun violence. Goyal said that no dataset records all firearm injuries in the U.S. That’s because people do not always report gun injuries, meaning the numbers we do have under-count the problem.

And while this study’s data suggest a relationship between stricter gun laws and fewer child fatalities linked to guns, Goyal said that does not mean these laws caused those outcomes. While the study adjusted for income, race and education, researchers did not account for other laws that could have influenced lower rates of child firearm fatalities, the authors said.

It’s also unclear whether states with stricter gun laws do a good job of enforcing them, Goyal said, which calls into question whether or not these laws make much difference. Researchers, she said, need more comprehensive data to support that claim.

The study also grouped in young people between the ages of 18 and 21 into its accounting of child fatalities, which critics say painted a disingenuous picture for a study focused on child deaths.

“This study is more propaganda than scientific research,” said Lars Dalseide, a spokesman for the National Rifle Association.

Matthew Larosiere, legal policy director with the conservative Firearm Policy Coalition, flatly rejected the study’s use of the Gun Law Scorecards, which he sees as biased coming from a gun-control advocacy organization. “The variables they use suggest their own conclusion.”

But Larosiere agreed more data is needed before people can say conclusively what factors keeps kids safer in the presence of guns.

“The more people who are trying to [study] this, the better” Larosiere said.

What do we know about gun violence so far?

This is not the first time researchers have tried to understand the scale of pediatric deaths tied to guns and whether stricter laws decrease the frequency of these tragedies.

Firearms were ranked as the second-leading cause of death among U.S. children in 2016, behind motor vehicle accidents, according to a study published in the New England Journal of Medicine. In 2016, 15 percent of all 20,360 child deaths were tied to guns, whether homicide, suicide or accident.

In a 2017 study published in the American Journal of Public Health, researchers studied data from 1999 to 2016 to gauge how state laws regulate firearm possession, storage, ammunition and trafficking.

Even with 26 years of data, those authors wrote there remained “a need to evaluate the impact of these laws on firearm violence to understand which laws are effective in informing policy decisions.”

A lack of data is not a new problem in the gun debate that has embroiled the U.S. for decades. In 1996, Congress passed the Dickey Amendment, which banned the Centers for Disease Control and Prevention from receiving funds that could be used to “advocate or promote gun control.” Many saw the move as being backed by the NRA.

More than two decades later, a chilling effect still can be felt in public health research and the lack of data, as the U.S. flounders over how to measure gun violence and identify, develop and track programs that could improve health outcomes.

Meanwhile, several high-profile mass shootings, including at schools like Sandy Hook Elementary in Connecticut and Stoneman Douglas High in Florida, have shaped the national discussion around gun control in America, prompting children themselves to step forward to call for greater safety and greater restrictions.

In a 2013 commentary published in the Journal for the American Medical Association, Garen Wintemute, who oversees the Violence Prevention Research Program at the University of California at Davis, wrote that, “To prevent firearm violence, our research effort must be substantial and sustained.”

In 2018, Congress said the federal government could pay for gun violence research. This language explicitly said the “Secretary of Health and Human Services has stated the CDC has the authority to conduct research on the causes of gun violence.”

So far, Democratic-led efforts to secure more funding have stalled on Capitol Hill.

On Jan. 31, 2018, Kristin Song’s 15-year-old son Ethan had returned to their house in Guilford, Connecticut, from an orthodontist appointment, finally free of his braces. After getting home, he walked to see one of his best friends — a trip he had taken countless times for 10 years. But this time, he didn’t come back.

Song later learned her neighbors had left guns unsecured in a cardboard box in a closet, along with a few rounds of ammunition. Weeks earlier, the neighbor showed Ethan and his friend how to shoot the gun. Now Ethan had fatally shot himself, his death ruled an accident.

Ethan had once told his mom he wanted to join the Army and have seven children. That future now gone, Song did not want to wait for more data on gun violence before taking action.

More than a year after his death, Song fought to get House Bill 7218, dubbed Ethan’s Law, signed by Connecticut Gov. Ned LaMont last month. The legislation requires the safe storage of loaded and unloaded firearms in homes with residents under age 18.

“When Ethan died, the morning after, my husband and I looked at each other and said, ‘This child is not gonna die in vain,’” Song said.

For her, the new law was bittersweet, a milestone in her journey that began with a gunshot.

Laura Santhanam is the Data Producer for the PBS NewsHour. On Twitter: @LauraSanthanam