s the United States has struggled to build support among its traditional allies in Europe to combat what it calls Iran’s aggression, it has been forced to look elsewhere, such as Latin America, for support.

This week, the Argentine government plans to designate the militant group Hezbollah as a terrorist organization, giving the Trump administration another ally in its push to build an international coalition to confront Iran. Hezbollah, which is based in Lebanon, is supported by Iran.

Secretary of State Mike Pompeo will travel to Argentina later this week to take part in events honoring the 25th anniversary of the bombing of a Jewish Center in the Argentine capital, according to two sources familiar with details of the visit. 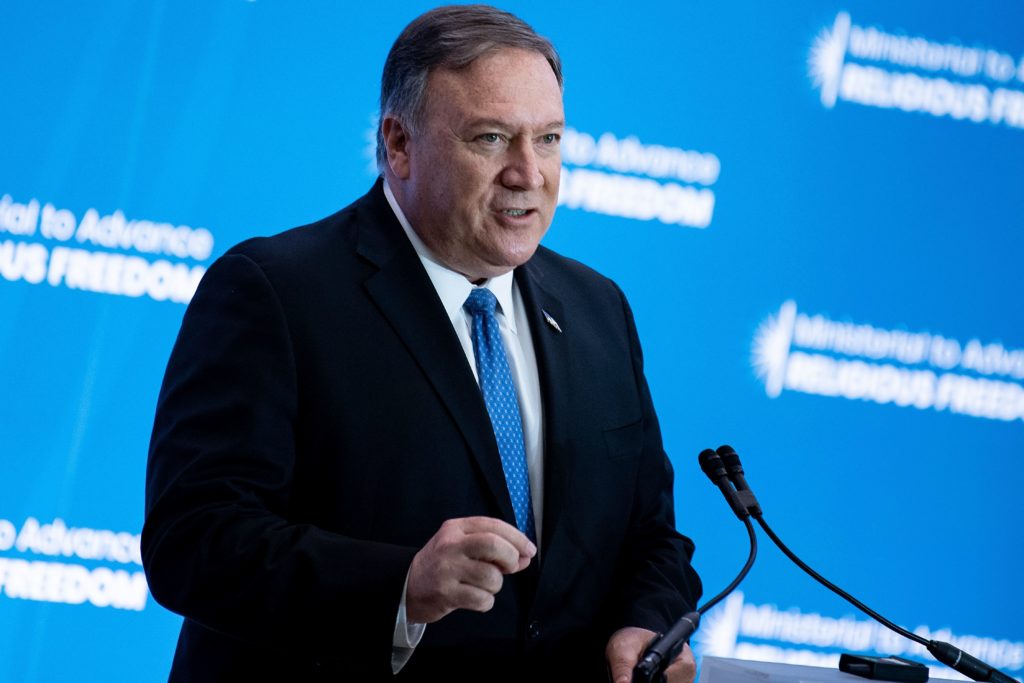 Secretary of State Mike Pompeo speaks during a religious freedom summit at the Department of State on Tuesday. Pompeo is headed to Argentina, which is expected to announce it’s joining an international coalition to counter Iran. CREDIT: Brendan Smialowski/AFP/Getty Images

“This is going to make the United States very happy,” said Seth Jones, a former Pentagon adviser who studies counterterrorism at the Center for Strategic and International Studies. “The U.S. is having problems right now building a coalition against Iran.”

In Buenos Aires, Pompeo will participate in the second Western Hemisphere Counterterrorism Ministerial, aimed at highlighting challenges of terrorism in the hemisphere.

Pompeo will also visit Ecuador, El Salvador and Mexico and make a stop in Puerto Rico, a U.S. territory.

“We want to adopt a communique, the details of which will include things like a call for domestic designations regimes throughout the region so that countries have the same capabilities the United States does to impose sanctions on terrorist organizations and their financiers,” the official told reporters. “So over the short run we would like to see more countries adopt those laws, and over the longer run we would like to work with countries in the region to do joint designations of terrorists.”

As an example, the officials pointed to the establishment of the Terrorist Financing Targeting Center, where the United States works with Saudi Arabia and other Gulf countries to combat terrorist financing. It includes a number of joint designations that target groups like Hezbollah and ISIS.

Last month, President Trump said the U.S. was “cocked & loaded” to strike Iran. He stopped the strikes 10 minutes before they were to be launched — a move that could have accelerated the path to war.

Soon after, Pompeo began a new effort to build an international coalition against Iran.

But European leaders have resisted the United States’ “maximum pressure campaign” against Iran. Several European nations do not want the United States to abandon the pact aimed at curbing Iran’s nuclear program.

French and German leaders have continued to push to make reducing tensions a priority.

Heiko Maas, Germany’s foreign minister, warned that “the risk of war in the Gulf has not been averted.”

Instead of Europe, the secretary of state kicked off his coalition-building tour with visits to Saudi Arabia and the United Arab Emirates, two countries that had been working to limit Iran’s influence in the region.

Argentine Security Minister Patricia Bullrich appeared to confirm plans to include Hezbollah on the designated list of organizations last week during a meeting with reporters following Cabinet meetings.

“What we are working on is the list to be composed of organizations with specific allegations,” Bullrich said. “In this case there are red alerts, we adhere to the list of the United Nations and we will add those terrorist organizations who have had activity in Argentina.”

Senior officials say the timing is not a coincidence. Pompeo’s trip coincides with events honoring the victims of the 1994 bombing of the Asociación Mutual Israelita Argentina, or AMIA, in Buenos Aires, which killed 85 people. Buenos Aires prosecutors have charged Hezbollah with carrying out the bombing with Iranian support.

The visit also comes as the center-right Argentine government of President Mauricio Macri positions itself for a reelection campaign this fall and is eager to signal its support from the U.S.

Jones said the designation will be important for the Trump administration politically considering the challenges it has had generating international support. But he said it’s unclear what concrete effects it will have on putting pressure against Iran.

Benjamin Gedan, who was National Security Council director for South America during the Obama administration, said the designation will put pressure on other governments in Latin America that have been reluctant to take unilateral action against Iran.

“Though not a global power, Argentina’s traumatic experience with Hezbollah makes it a compelling partner in White House efforts to highlight Iranian misconduct,” said Gedan, now a senior adviser to the Wilson Center’s Latin American Program and the director of its Argentina Project.

Argentina has suffered two attacks attributed to Iran and has long taken a hard line on Tehran. Argentina’s president has also depended on the Trump administration’s economic support.

“Argentina’s financial survival depends upon IMF support, and the U.S. is its biggest backer at the fund,” Gedan said.

Ambassador Nathan Sales, the State Department’s coordinator for counterterrorism, spoke last week at the Wilson Center during a commemoration event for the bombing. He said U.S. officials will work with Argentine officials to help “attack the nexus between transnational crime and terrorism.”

“Secretary Pompeo recently emphasized that ‘Iran is the world’s largest state sponsor of terror,’ ” Sales said. “It was true in 1994 and it’s true now.”