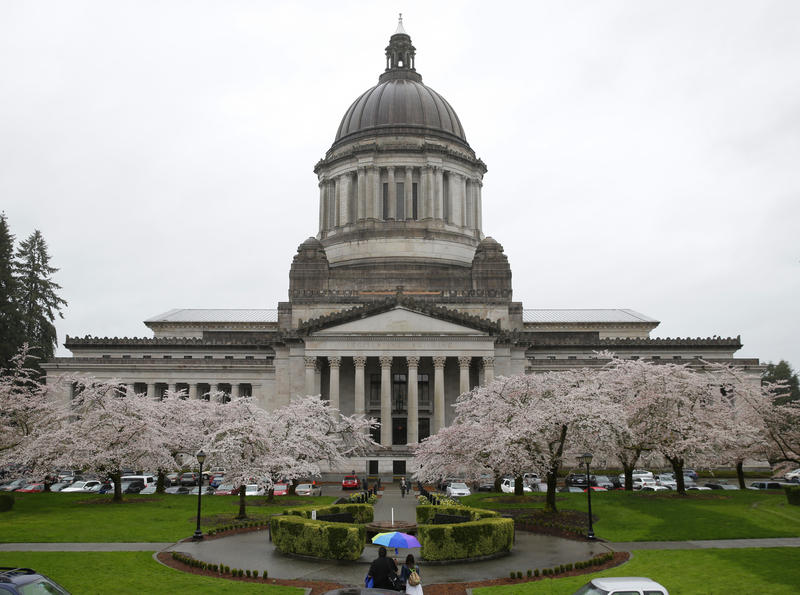 In the month since Washington state Sen. Mona Das, a first-term Democrat from Kent, made headlines for comments about racism and sexism in the Senate Democratic Caucus, she has been calling her colleagues to apologize that her words “were as strong as they were.”

However, Das, who’s Indian American, says she doesn’t regret her comments because it’s prompting a broader discussion of race and equity in the Washington state Legislature.

“I believe that this has opened a conversation that has been an elephant in the room for a really long time and now we’re having these conversations honestly, authentically, deeply and coming from a place of love,” Das said in a recent interview.

Last month, at a legislative wrap-up event hosted by the Kent Chamber of Commerce, Das gave a speech about the challenges she’s faced as a woman of color running for office and after serving less than a year as an elected official.

Specifically, Das called her Senate Democratic colleagues to task for their conduct behind closed doors when they caucus on bills.

Das described what she heard as “coded language” and said it “would shock only the white folks in the room because the brown folks know it’s there.”

Das said she wasn’t planning to talk about race until she heard her seatmate, Democratic state Rep. Debra Entenman, who is African American and also was recently elected, tell the audience that she’d been subjected to “misogynistic and racist” comments about her physical appearance from members of the public. 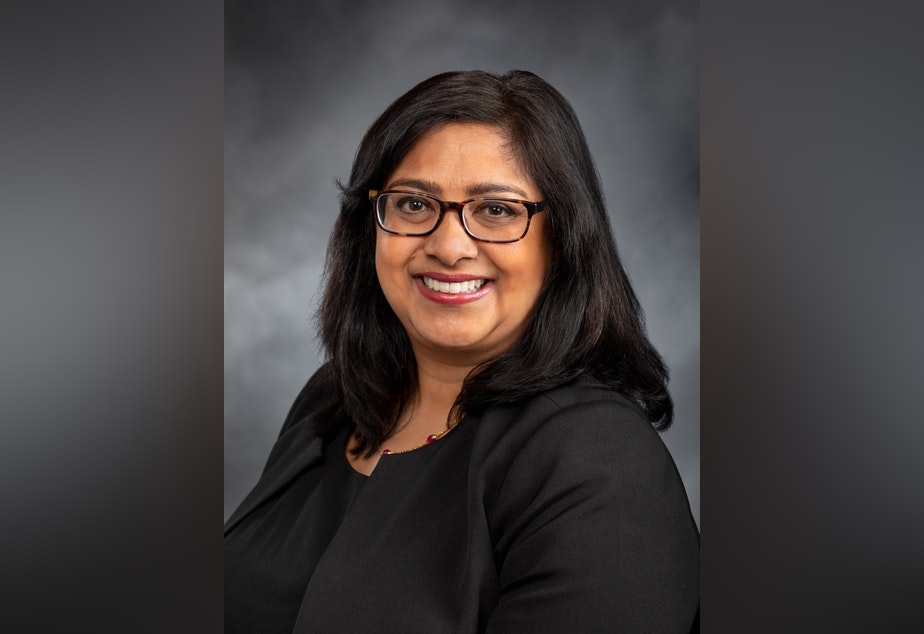 Washington state Sen. Mona Das, a Democrat who represents the Kent area south of Seattle, has made claims of ‘coded’ racism in her Democratic caucus. CREDIT: Washington State Legislature

Video from the event was posted to Facebook by iLoveKent.net, and comments by Das were first reported by the Kent Reporter.

In a Facebook post after her comments became public, Das called the Kent Reporter’s story a “mischaracterization of my remarks” and emphasized to The Associated Press that she had never heard anything overtly sexist or racist in the caucus room.

Das says she now regrets challenging the accuracy of the reporting and has apologized to the reporter who wrote the original story.

In an interview, she also reiterated that what she heard in the Senate Democratic Caucus is not unique to that setting.

“The coded language is everywhere and I think what surprised me was that it was also there,” said Das, who declined to give specifics.

“I will say that the most sexism and racism stuff that I saw was always on the floor or in committees, but I cannot remember or think of a single incident in caucus where I thought that,” said Dhingra, who serves a co-deputy majority leader in the Senate.

However, she added, it’s important not to minimize individual experiences.

Regardless of the findings of that investigation, Senate Majority Leader Andy Billig, a Spokane Democrat, said Das’ comments at the Kent Chamber of Commerce fit into a larger and growing conversation in the Legislature about race and equity.

“When I arrived in the Senate seven years ago, these conversations weren’t happening at all,” Billig said.

Pointing to the diversity of his leadership team and a new legislative code of conduct, Billig said he’s proud of the progress that’s already been made. But he also acknowledged there’s more work to be done.

The growing focus on race and equity in Washington’s Capitol comes in the wake of the #MeToo movement and as the Legislature, once a bastion of white men, becomes more reflective of the state’s population. Currently, women make up 41.5 percent of the Washington Legislature, the third highest percentage of any state, according to the Center for American Women and Politics at Rutgers University.

The focus in the Washington Legislature also mirrors a broader conversation that’s happening in workplaces and in communities across Washington and America, and in the wake of the election of President Donald Trump. Terms such as white privilege and systemic racism are being used by the Democratic candidates for president, and are routinely topics of engagement and discourse on social media.

In Olympia, both the Washington House and Senate have begun holding cultural competency training sessions. This fall, the Senate Democratic Caucus retreat will include equity-related training, which was planned before Das made her comments.

In addition, the 2018 election delivered one of the most diverse classes of freshman lawmakers to Olympia in history, including more women and more members of color. In the Senate Democratic Caucus, the number of women of color doubled from two to four. In the House, Democrats welcomed four new women of color to their ranks. In January, the five black members of the House formed a Black Caucus. In the Senate, seven Democrats established a Members of Color Caucus. The Washington Legislature also has an eight-member LGBTQ Caucus.

During the 2019 session, which wrapped up in April, majority Democrats passed a number of bills related to race and equity. They included passage of Initiative 1000 to restore affirmative action in Washington and create a taskforce to develop a proposal for a new statewide office of equity.

Also, in January, the Legislature adopted a new code of conduct prohibiting discrimination and harassment, along with a bill mandating the development of new workplace training based on the code.

“As a state and as a caucus, especially this session and last session, we’ve really made incredible strides in acknowledging and understanding race and equity issues,” Dhingra said.

But Dhingra also described experiencing and witnessing what she termed “microaggressions” during the 2019 session. For instance, she said, people confused her with Sen. Das, security staff stopped members of color at the door and Republican senators joked about how to pronounce newly elected Sen. Joe Nguyen’s last name during a traditional, lighthearted welcoming ceremony on the senate floor.

“We should be having very authentic conversations on what it means to be a person of color in the United States of America,” Dhingra said. “It’s not about accusing people or telling people they’re doing something wrong, but really understanding how we got here as a country.”

Republican state Sen. Shelly Short, who serves as minority floor leader, said she welcomes a greater focus on making the Legislature work better for everyone — including women, people of color and individuals with families.

“I’m proud to be part of an institution where we have men and women of all nationalities, of all walks of life, coming in to make decisions and to work together to make decision,” said Short, noting that the Senate Republican leadership team is made up of primarily women.

But Short said she’s concerned the conversation Democrats want to have around race and equity runs the risk of becoming divisive.

“If we’re worried … about how someone is going to characterize what you said, that sets a chilling effect on our ability to move the state forward,” Short said.

Regarding the welcoming floor speeches, Short said they involve “gentle humor” that’s meant to build collegiality and that no offense was intended.

In the House, state Rep. Kristine Reeves, a Democrat from Federal Way, has been thinking about equity and diversity in the context of modernizing the legislative work environment. When she first took office in 2018, Reeves was the only African American woman in the Legislature and the first black woman elected to the House in 18 years. Since then, two more black women have been elected to the House.

Reeves said after taking office she quickly had a realization.

“This institution really wasn’t built for … me as a working mom, as a woman, as a person of color,” Reeves said.

Calling the #MeToo movement the tip of the iceberg, Reeves said she wants the Legislature to look more deeply at how its structured and how its functions. She’s considering introducing legislation next year to create a joint select committee on legislative workplace modernization. But Reeves already is anticipating pushback.

Back At Washington Capitol, Rep. Matt Shea Remains Defiant As Supporters Rally To His Defense

In an exclusive interview with public radio’s Northwest News Network, an upbeat Shea — “I’m doing great” — said he plans to fight any effort to expel him from the House chamber and called the allegations against him a “flat out lie.” Continue Reading Back At Washington Capitol, Rep. Matt Shea Remains Defiant As Supporters Rally To His Defense 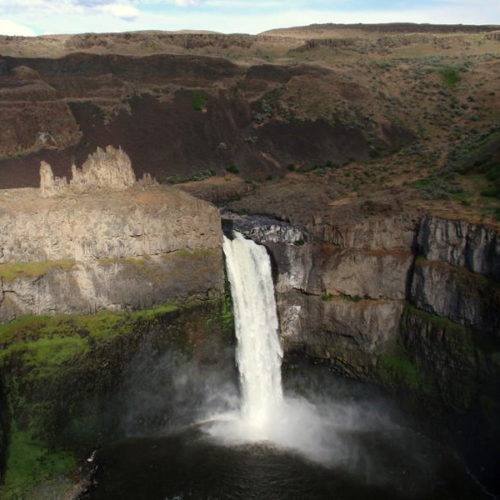