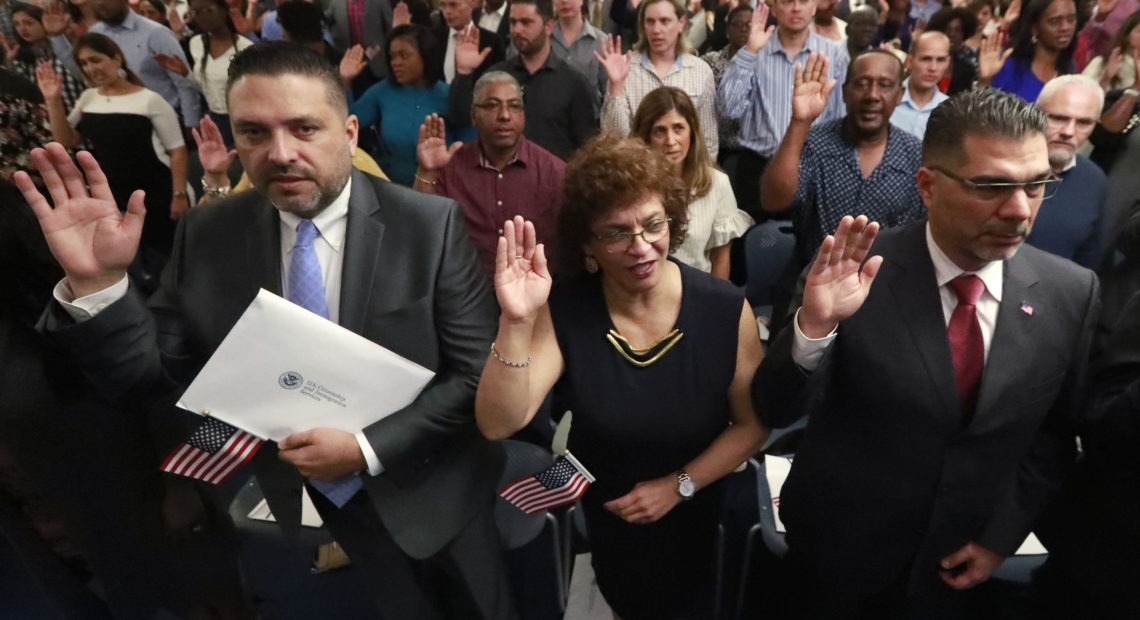 New citizens take the oath of allegiance during a naturalization ceremony in Oakland Park, Fla., earlier this year. The Trump administration has announced there will be changes to the U.S. citizenship test. CREDIT: Wilfredo Lee/AP

The Trump administration is planning changes to the U.S. citizenship test. The U.S. Citizenship and Immigration Services says it is revising the test to ensure that “it continues to serve as an accurate measure of a naturalization applicant’s civics knowledge.”

The test was introduced in 1986 and last revised in 2008. In a USCIS statement, acting Director Ken Cuccinelli said, “Updating, maintaining, and improving a test that is current and relevant is our responsibility as an agency in order to help potential new citizens fully understand the meaning of U.S. citizenship and the values that unite all Americans.”

Since assuming office, President Trump has attempted to implement broad changes to U.S. immigration laws and policies. Last week, the Trump administration announced a new rule requiring asylum-seekers to first apply for asylum in at least one country they pass through on their journey to the U.S.

The administration has also argued for a citizenship question to be added to the 2020 census. NPR’s Hansi Lo Wang and Franco Ordonez reported on Trump’s recent decision to drop those efforts. Instead, they wrote, Trump announced he “would sign an executive order to obtain data about the U.S. citizenship and noncitizenship status of everyone living in the United States.”

Cuccinelli spoke with The Washington Post about changes to the U.S. citizenship test, which the USCIS plans to launch in December 2020 or early 2021. “Isn’t everybody always paranoid that this is used for ulterior purposes?” Cuccinelli said. “Of course, they’re going to be sorely disappointed when it just looks like another version of a civics exam. I mean that’s pretty much how it’s going to look.”

In a statement, the USCIS said it had formed a naturalization test revision working group in December 2018 with “members from across the agency.” The USCIS said it is “soliciting the input of experts in the field of adult education to ensure that this process is fair and transparent.”

The exam currently asks applicants 10 randomly generated questions from a list of 100. The questions focus on three subjects: American government, American history and integrated civics, which includes American geography, symbols and holidays. Applicants for U.S. citizenship must get at least six out of the 10 questions correct to pass the test.

Last year, the USCIS naturalized more than 750,000 people, which the agency says is a five-year high. The USCIS reports a national pass rate of 90% for the citizenship test and says a pilot of its revisions will be rolled out this fall.

Then-USCIS Director Francis Cissna first announced upcoming revisions to the test in May. Cissna wrote, “Citizenship is the culmination of an immigrant’s journey to fully join our nation and live with us in a common bond … By revising this test every 10 years, we can ensure that the civics education requirements remain a meaningful aspect of the naturalization process.”