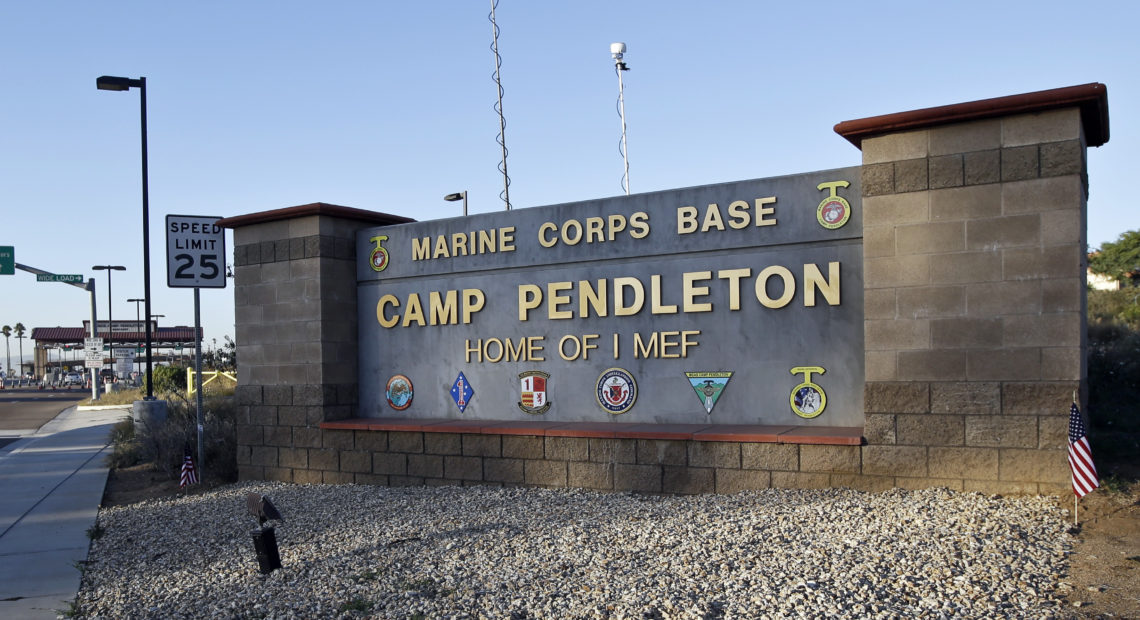 What We Know: ‘Mass Arrest’ Of U.S. Marines Over Alleged Human Smuggling And Drug Offenses

PHOTO: A human smuggling investigation by the military led to the arrest of 16 Marines on Thursday while carrying out a battalion formation at California’s Camp Pendleton, a base about an hour’s drive from the U.S.-Mexico border. CREDIT: Lenny Ignelzi/AP

The Navy has apprehended 18 Marines and one sailor over their alleged involvement in human smuggling, drug offenses and other crimes, the Naval Criminal Investigative Service said.

Sixteen of the Marines were arrested in highly public fashion at a major West Coast military base Thursday.

On Thursday morning, after some 800 Marines gathered in formation at Camp Pendleton north of San Diego, Marine officials working with NCIS pulled out 16 people and placed them under arrest, as NPR’s Tom Bowman reported.

The Marine Corps has not provided details about the alleged crimes, saying in a statement that they include “various illegal activities ranging from human smuggling to drug-related offenses.”

Maj. Kendra Motz, a spokesperson for the 1st Marine Division, said that the suspects had not been charged as of mid-Friday. She added that their commanding officer “will act within his authority to hold the Marines accountable at the appropriate level, should they be charged.”

It’s rare for such a large group of Marines to be arrested, Bowman said. “Marines I talk with say they don’t recall a number this high being arrested for alleged illegal activity in memory.”

Another human smuggling investigation provided the information that led to the arrests. Two Marines who were also from Camp Pendleton were arrested on July 3 on allegations they helped three migrants enter the U.S. from Mexico. A senior Marine officer told Bowman that investigators were tipped off to the alleged activities of the service members arrested Thursday by going through the first two Marines’ phones.

Those men, Byron Law II and David Salazar-Quintero, have been charged in federal court with “transportation of aliens for financial gain and aiding and abetting.” Both have pleaded not guilty.

According to court documents, Law and Salazar-Quintero were apprehended by a U.S. Border Patrol agent as they drove on an interstate highway about 7 miles north of the border. There were three passengers in the back seat who stated they were citizens of Mexico without immigration documents. They told authorities that they planned to pay $8,000 to get into the U.S.

Both service members allegedly told authorities that that was not their first time picking up migrants, according to the complaint.

NCIS is also investigating the two Marines’ actions, Motz told NPR, and they are currently confined at Camp Pendleton.

Camp Pendleton is about 60 miles north of the border. As The Associated Press noted, “authorities said the base, cut by Interstate 5 leading to Los Angeles, sits along a well-traversed route used by migrant smugglers.”

In addition to the mass arrest Thursday, eight other Marines were pulled out of the formation for questioning about separate possible drug crimes, the Marines said.

The Marines said that none of the accused personnel were involved in the Southwest Border Support mission, where troops are assisting U.S. Customs and Border Protection to secure the U.S. border with Mexico.

Motz, the spokesperson for the 1st Marine Division, said that all of the Marines arrested and questioned were of relatively low rank – from private first class to corporal. According to Marine Corps Times, they were from 1st Battalion, 5th Marines. That regiment “deploys as a Battalion Landing Team,” according to its website.

“1st Marine Division is committed to justice and the rule of law, and we will continue to fully cooperate with NCIS on this matter,” the Marines statement said. “Any Marines found to be in connection with these alleged activities will be questioned and handled accordingly with respect to due process.”