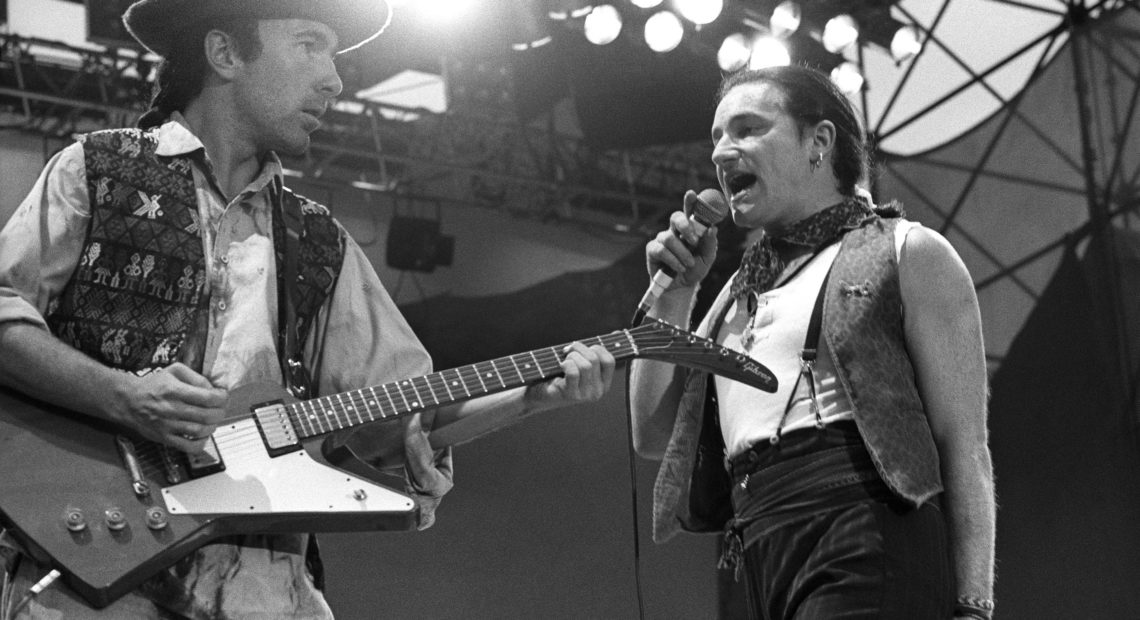 American Anthem: In U2’s ‘I Still Haven’t Found What I’m Looking For,’ A Restless Search For Meaning

PHOTO: The Edge and Bono perform in the Netherlands during U2’s The Joshua Tree tour in 1987. The U2 song “I Still Haven’t Found What I’m Looking For,” inspired by gospel, has become a rock ‘n’ roll hymn, even finding its way into real-life church services. CREDIT: Rob Verhorst/Redferns/Getty Images

The earliest anthems were sacred hymns, religious songs of praise. For this installment of NPR’s American Anthem series, we examine a rock ‘n’ roll hymn — from Ireland.

U2’s “I Still Haven’t Found What I’m Looking For” was released in 1987 on The Joshua Tree, an album inspired by the band’s experience of America, both as a real place and as a mythic idea. U2’s lead singer and songwriter, Bono, has referred to it as “a gospel song with a restless spirit.” To understand where that restless spirit came from, it helps to know the depth of the band’s religious roots.

U2’s four musicians met when they were teenagers in Ireland in the 1970s, a turbulent time known as the Troubles. Bono once wrote that on May 17, 1974, he “dodged one of the bloodiest moments in a history that divided an island,” simply because he rode his bike to school that day — otherwise, he’d have been on one of the Dublin streets where three car bombs killed 33 people. That same year, Bono’s mother died suddenly from a brain aneurysm. He was 14.

Three of the members of U2 — Bono, guitarist The Edge and drummer Larry Mullen Jr. — were members of a Christian fellowship called Shalom. For The Edge and Bono, their faith seemed at odds with rock ‘n’ roll: They felt they should be doing something more meaningful with their lives than playing music. In an interview with presenter Gay Byrne for the Irish broadcaster RTE, Bono said that just as the band was on the brink of major success, they went to tell their manager they wanted to quit. He was a no-nonsense type named Paul McGuinness.

“And we say, ‘Paul, we’re done. We actually want to do something useful with our life, and maybe rock ‘n’ roll isn’t it,’ ” Bono recounted. “And he’s like, ‘Oh, so God tells you to do this?’ And we said, ‘No, not exactly, but it’s very deeply convicted here.’ He said, ‘Would you mind speaking to God about the commitments I’ve made on your behalf to do another tour?’ ”

They stayed. Bono went on to say their songs are “prayers of a kind.”

Theologian Sarah Dylan Breuer agrees. In the early 2000s, she founded a worship service called the U2charist — as in U2 plus Eucharist — that incorporates the band’s songs, played by local musicians. Breuer says “I Still Haven’t Found What I’m Looking For” works because it’s an expression of both spiritual joy and disappointment.

“A lot of the contemporary music that’s written for worship in Christian circles can be this kind of relentlessly ‘I totally love God with all my being, and everything’s going to be great.’ And that’s really not most people’s lived experience day to day,” she says. But Breuer adds that some members of the clergy believed a few of the verses were inappropriate for the service. For example:

“Some people said, basically, that human desire that’s obviously sexual has no place in the service,” she explains. “Some people were OK with it, but wanted to allegorize it, and said it’s completely not about human beings at all — it’s only desire for God.”

Bono told Rolling Stone “I Still Haven’t Found What I’m Looking For” is “an anthem of doubt more than faith.” Joshua Rothman, a writer for The New Yorker, hears something else: “It’s a song that celebrates wanting.”

In a 2014 piece called “The Church of U2,” Rothman outlined the case for this song as a potent contemporary hymn, partly because of the uncertainty expressed in Bono’s lyrics. “It’s a song about searching for meaning or transcendence,” he says. “And to me, the most interesting thing about it is that you don’t find it. It’s about the search.”

Meanwhile, Jon Pareles, chief pop critic for The New York Times, believes much of the song’s power comes from the way Bono lingers on one word: “still.”

“The genius of the chorus is in its first two words,” Pareles says. “There’s the leap from ‘I still’ and ‘haven’t found.’ That ‘still’ emphasized in the melody tells you he’s been looking for a long time. It’s a simple thing. But it’s a profound thing.”

Not long after the song’s release, U2 took it to church themselves — traveling to New York to meet up with a gospel choir, New Voices of Freedom, that had arranged its own version. “It sounded totally different, but it sounded really exciting and new,” The Edge explained in the 1988 documentary Rattle and Hum. “And so we traveled down to Harlem and visited this church.”

In the film, the band rehearses with the choir at Harlem’s Greater Calvary Baptist Church in preparation for a performance at Madison Square Garden. Bono begins solo, while the choir’s singers watch intently from the pews, swaying along to the music. When it’s their turn to jump in, the song transforms.

For Claudette Bell, who performed and conducted gospel in the Methodist and Baptist churches, there’s zero ambiguity in the words and sound of “I Still Haven’t Found What I’m Looking For.” She says the yearning it describes is eternal.

“It could be today — where people are, you know, kind of fighting for space and knocking people down for whatever reason,” Claudette Bell says. “You have a lot of walls to scale and mountains to climb … and you just want to be with something that’s good.”

Which may be why this searching, restless anthem rouses the faithful almost every time U2 performs it.

Ellen Silva edited this story for broadcast with production help from Andrew Limbong. Daoud Tyler-Ameen adapted it for the web.