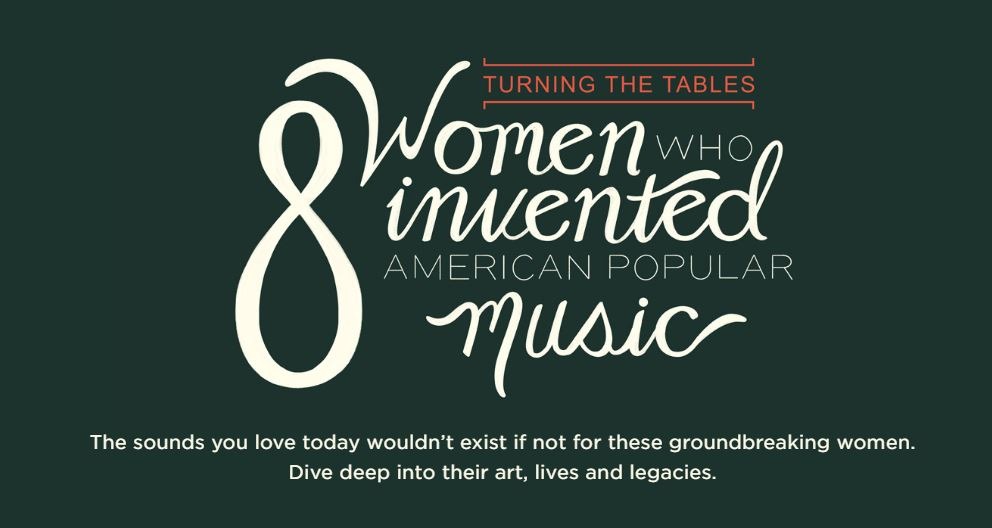 The 8 women who made popular music what it is today include some of the most recognizable names in their fields then and now. NPR’s Turning the Tables series will explore each throughout August and September 2019. CREDIT: NPR

These days history is carried forward on t-shirts adorned with Helvetica typeface, studded with ampersands. You’ve seen one, maybe just yesterday, on somebody at the dog park or in the club. Alcott & Austen & Bronte & Plath — great women of Western literature. Or Chanel & Louis Vuitton & Prada & Gucci — the most significant houses of haute couture. Sometimes these graphic assertions of taste and knowledge are playful, listing the cast members of TV shows like Friends or the ingredients in pico de gallo. Others make much more serious statements, including anti-racist and feminist ones.

Helvetica list t-shirts exemplify the 21st-century impulse to democratize canonization, the process of determining cultural significance. The first acknowledged one, actually reinforced existing hierarchies. Released in 2001 by the graphic design firm Experimental Jetset, it listed John & Paul & Ringo & George, the members of the mainstream’s favorite rock band. Almost immediately, people seized the form to argue with the content, asserting their own ideas about who and what should be celebrated, shared and remembered. This viral phenomenon shored up more organized ones, like the #OscarsSoWhite movement to diversify the Academy Awards, capturing the spirit of a time when grassroots efforts to tell the American story are often considered more meaningful than institutional ones.

We came up with the Turning the Tables series inspired by this perspective. One thing institutions like NPR Music can do is take others’ ampersands seriously, exploring and amplifying them. That’s a basic goal of our series, now in its third season. It is dedicated to refocusing the canon on stories and voices that have been overlooked, marginalized or hidden in plain sight. The goal is to free the music of women and others who don’t fit the dominant straight-white-male paradigm from special categories, and put it at the center, where major conversations about culture cohere.

In our first two years we made voluminous lists of the 150 Greatest Albums Made By Women, of the 25 Most Influential 21st Century Women and of the 200 greatest songs by women and non-binary people working today. But we’ve realized we were missing something: the beginning, or a beginning, of the story we’re trying to tell and challenge and then tell differently. So, amplifying those ampersands, this year we’re diving deeper into America’s collective memory. With the help of an advisory board made up of women deeply engaged in similar work as musical archivists, curators, scholars, artists and critics, we have (metaphorically) made our own Helvetica t-shirt, inscribed with the names of eight women who fundamentally shaped American popular music, from the beginning of recorded music to the dawn of rock and roll.

Their music spans blues, jazz, country, gospel and salsa; it traveled from the tent show to the concert hall. They are: Bessie & Maybelle & Billie & Marian & Ella & Mary Lou & Celia & Rosetta. Smith, Carter, Holiday, Anderson, Fitzgerald, Williams, Cruz and Tharpe. These women not only made some of the most significant music of the past century; they originated genres, broke political boundaries, nurtured generations of followers and in most cases, became icons.

From the menu at the top of this page, you can enter our explorations of these artists and their influence. One way to think about it is as a virtual Hall of Fame. Beginning August 5, we’ll give you a week on Bessie Smith. Each week that follows for the next two months, we’ll go deep into the story of another of our “great Eight,” exploring how they lived in their times, what their legacies have wrought and how they remain relevant today. Each week will begin with a playlist showing how the artist’s music fits in with that of her influences, peers and heirs. There will also be much to read. We asked many of the women who are remaking popular music history already — scholars whose books are redefining the field of popular music, poets and memoirists engaging with music in very personal ways and musicians carrying on the legacy in their own work — what makes these historical figures come alive for them. They came back with new insights and surprising stories that will change the way you think about even the most familiar names on our list.

You’ll read about Maybelle Carter’s life as a working musician and mother in the Depression-era South; about Mary Lou Williams’s apartment, where she taught jazz greats like Thelonious Monk and Charlie Parker how to swing; and about why Marian Anderson matters beyond her legendary 1939 performance on the steps of the Lincoln Memorial. There will be videos exploring Ella Fitzgerald’s scatting technique and Celia Cruz’s African sense of rhythm. We also challenged our colleagues across the spectrum of NPR to forge their own connections to our eight greats — on podcasts like Code Switch and Throughline, in programs like Jazz Night in America and World Cafe, and on Morning Edition and All Things Considered, you’ll hear more about these storied musicians. Click the photo of an artist in the illustration above (starting on August 5) and you’ll find a panoramic view of her world.

To organize this wide array of approaches, we played around with the right frame of reference. Is this series about redefining greatness? Considering origins? Exploring the many forms expertise can take? It’s not like the great Eight we chose really need anyone to argue for them. Bessie Smith is to the ’20s what Elvis is to the ’50s, her earthy voice and interplanetary smile signifying the birth of the modern in the bustling cities touched by the Great Migration. Rosetta Tharpe not only redefined electric guitar playing within the gospel world she called home; her playing directly influenced many of the men who’d be lauded as creating rock and roll. Billie Holiday – what can be said about her? Misunderstood myth, high priestess of feeling, she was also a technical master who made a new way of singing possible. Ella Fitzgerald did the same in a different vein, her precision and fine and mellow emotional intelligence giving vocal jazz its shape for much of the 20th century. And Celia Cruz was the most significant innovator in the cross-cultural juggernaut called salsa.

It is true, however, that all of these women have been underestimated at some point by the enshrining institutions of American popular music. Though a few are in the Rock & Roll Hall of Fame, they were admitted through the side door of the Early Influences category. All have been the subject of richly rendered biographies, film documentaries and musical anthologies, but only one or two are instantly recognizable in the manner of, say, Louis Armstrong or Miles Davis. Even in those cases – Bessie, Billie – they’re mostly known as faces, not necessarily as voices, and, by most people, not as complex women consciously making groundbreaking and still-influential music.

This is partly because these artists came before or worked outside the confines of rock and roll, the defining force in so much 20th century popular music. In 2019, rock may have given way to hip-hop and pop in terms of commercial significance, but it’s still the mainframe when it comes to considering what matters historically. Where does your mind go when you think about a musical hall of fame? Probably to Cleveland, where the Rock & Roll Hall of Fame sits in its I.M. Pei-designed pyramid on the city’s lakeshore. As Evelyn McDonnell pointed out in a spirited essay for Longreads last year, as of now not even 8 percent of the Rock Hall’s honorees are women. (As part of the collective Turn It Up, McDonnell recently launched an online Hall of Fame to up the pressure on the one in Cleveland.) The folks at the Rock Hall are actively working to correct this imbalance, and should be applauded for their efforts. But it turns out that one part of the problem is that grounding in rock itself: a genre designed to celebrate male rebellion and desire. Our ideas about what matters most in jazz and hip-hop, and even contemporary country, have, since the rise of rock, also been largely cast within this mold.

Women, on the other hand, have historically thrived in musical encounters and historical moments when everything felt fluid, less like it’s all on a sport scoreboard: in the early days of blues, for example, when tent-show queens translated the language of vaudeville into a new form, in the World War II-era ballrooms where “girl” singers helped make jazz a music of the masses, or in those New York neighborhoods where Cuban and other immigrants changed the very rhythm of the city, women could be inventors. They improvised; they were individualists, but also cultural connectors. Their greatness was instantly recognizable but hard to talk about in the usual terms. Janis Joplin said this best when explaining what Bessie Smith mean to her: “She showed me the air and taught me how to fill it.”

In determining our inaugural class in a Hall of Fame that would by definition challenge the very concept of a Hall of Fame, we assembled a group of women who’ve dedicated themselves to tracing such changes in the atmosphere. Fourteen served on our advisory board; nearly forty more have contributed to the material you’ll read over the next two months. Among them are museum curators, authors of biographies and scholarly studies, producers of archival compilations, novelists, musicians and radio producers – people who’ve spent their lives thinking about how music has fit into history, and whose work is changing how people understand it now. We did not easily agree on our list. Raising even the major names led to debates over others who might equally deserve recognition. Bessie Smith? Ma Rainey. Maybelle Carter? The Latinx guitar pioneer Lydia Mendoza. Ella Fitzgerald? Swing pioneers the Boswell Sisters. We soon realized that, as with every year of Turning the Tables, this one will lead to spirited debate. We welcome that. Make your own Hall of Fame. Start by considering the basic architectural plan.

These women have been commemorated on postage stamps, with statues and plaques and museum exhibits, and in countless recorded and concert tributes. But history is slippery, now more than ever. Ella Fitzgerald was once a ubiquitous presence in Americans’ lives, her cheery face beaming out of their television sets as she shattered glasses in Memorex commercials. Now she’s rarely invoked beyond jazz circles. Billie Holiday remains a ubiquitous ghost, but, as biographers like Farah Jasmine Griffin have pointed out, her image has been bent into shapes that have little do with her real, musicianly form. Rosetta Tharpe has re-entered the public consciousness in the past decade thanks to the work of her biographer Gayle Wald and her recent Hall of Fame induction; but few current music fans actually know more than the bare minimum about her.

History is an ecosystem. It needs to be nurtured and protected. With this year’s version of Turning the Tables, we hope to entice you to enter the spheres created by eight extraordinary women, to be enriched by their gifts and inspired by their stories. Put their names on a t-shirt. Then do more.

Turning The Tables Season 3 launched on July 31, 2019. The series runs through the end of September, with one week devoted to each artist.