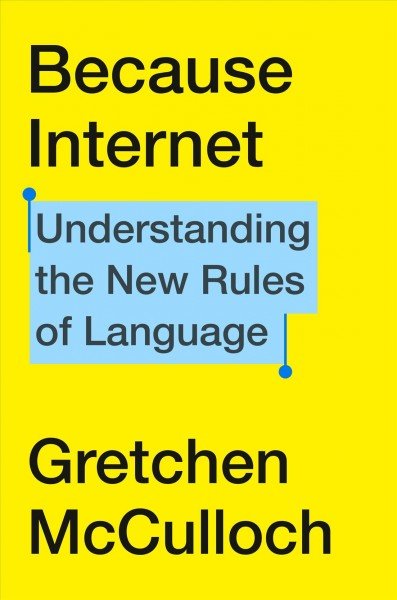 Author Interview: Our Language Is Evolving, ‘Because Internet’

The Internet has become a place where we cultivate relationships. Through quick messages that we type with our thumbs on our phones, we keep in touch with friends and family; we flirt and fall in love.

And the potential for miscommunication abounds. Who among us hasn’t wondered whether a message in ALL CAPS meant it was especially urgent? Furious? Or just enthusiastic?

Because Internet: Understanding the New Rules of Language by Gretchen Mcculloch

The linguist Gretchen McCulloch aims to clear some things up with her new book, Because Internet: Understanding the New Rules of Language. The “new” rules, she says in an interview, are “emergent.”

McCulloch says a lot of the confusion stems from the fact that people read Internet writing differently, depending on when they first went online. She gives NPR a few examples.

On the changing use of LOL

There’s a difference between how these different groups use “LOL” … the acronym which initially stood for “laughing out loud.” And if you talk to people in some of these older generations who are, you know, have been using the Internet for 20 years but came online in a less social space, they see it: OK, here’s an acronym; they’re told it is an acronym; it must mean “laughing out loud.” And so they still use it as actual laughter. Whereas when you talk to the youngest groups, LOL may have meant laughter for a very short period of time, but that laughter quickly became aspirational — you know, “Oh, that is kind of funny.” And then it became not even real laughter at all. It became more a marker of irony or softening or “I’m not angry at you,” “I’m not feeling hostile” — you know, these additional subtle social meanings.

And for the youngest group of people, there’s no literal meaning left to LOL at all. … It’s a filler that specifically indicates that there’s some sort of double meaning to be found. … If I say something that could be interpreted as rude or hostile like, “Oh, I hate you” — if I say “I hate you LOL,” now I’m joking, so it’s fine. I’m not laughing out loud while I hate you, like in a malicious sort of way; I’m undermining my message and saying “I hate you LOL [but I’m not serious about it].” But in the inverse, if you say “I love you LOL,” that doesn’t soften the message any more. Now that means “Oh no, I fake-love you,” like I’m being quite mean about that. So it’s not always a softener — it just hints toward some sort of double meaning, which could be good or bad.

On the passive-aggressive period

The period is such an interesting new battleground for Internet language because there’s definitely a traditional use which is still found in formal writing. You know, the book contains many periods, and they’re not passive-aggressive because it’s a formal context. But in an informal context, you don’t need the period anymore to distinguish between one sentence or one phrase and the next because you’re just going to hit “send” in a chat context. You can just send the message. … And that makes your messages easier to read than this massive wall of text, particularly on a tiny screen.

And yet that means that the period is now open and available for taking on other sorts of meanings and other connotations. And one of those is that very sense of formality — and you know when you read a formal sentence … and making your voice deeper at the end of the sentence, like you conventionally do with a period in formal writing, adds a note of solemnity or finality or seriousness to what you’re saying. … But the problem is if you say “OK, sounds good.” — and you add that note of seriousness — now you’ve got positive words and serious punctuation, and the clash between them is what creates that sense of passive aggression.

On the construction “because [noun],” which gives the book its title (Because Internet)

One of the things I really love about Internet language these days is what I call stylistic verbal incoherence mirroring emotional incoherence. So when you’re feeling upset or excited or angry or any of these extreme emotions or overwhelmed by how cute something is when you’re feeling any of these extreme emotions you make your language get artfully disordered to express that. And so for the title of the book Because Internet, saying: OK, I’m going to truncate this. Instead of “because of the Internet,” I’m going to make the shorter version “because Internet” — or “because homework” or “because weather” or any of these types of things, I’m going to make the shorter version because the answer is so self-evident that I can reduce it into this less coherent form. And you’ll understand that I’m nodding at this bigger phenomenon that we can share.

One new trend that I’ve seen that I really wish I had been able to spend more space on in the book is the continued evolution of keysmash. So, keysmash is when you mash your fingers against a keyboard to, you know, convey this incoherent emotion. And what I noted in Because Internet is that people have specific stylistic ways of keysmashing. He will write ASDF, etc. and they smash on the home row of keys. And I did a survey, and I asked people: Do you ever adjust or retype your keysmash if it doesn’t quite look right to you? And most people said yes. Even though this is random, they still retype it because they want it to look like the right kind of social randomness.

But what I was just noticing as I was writing the book, and didn’t quite have enough data to include, is that keysmashing has also been changing as we use mobile phones more. Because when you keysmash on a full mechanical keyboard you do have your fingers on the home row with ASDF and so on. But when you keysmash on a smartphone keyboard, you have your thumbs over like GHSDSK something like that so instead of going ASDF from left or right you might end up with like SKSKSK or GHGHGH, something going back and forth between your thumbs near the center of the keyboard. And so, the way we keysmash has been changing partly in response to the social pressure, partly in response to the devices we’re using. And it’s such an interesting example for me because it looks like we’re just being monkeys typing randomly on a keyboard producing something totally incoherent, and yet there are social patterns to it. There are real linguistic trends to keysmash — even something that looks so random.

On how to avoid misunderstandings

We talk to each other. You can ask people what they mean. … I mean, you don’t have to talk to people by picking up the phone — you can talk to people by saying, “What did you mean by that?” or “Are you actually mad at me?” in the text message. … Sometimes I say this is associated with older people, and people take that as a criticism. But I think it’s just as incumbent on younger people to say: Maybe I shouldn’t be overinterpreting hostility or passive-aggression … maybe I should just be interpreting this with the context of “I know this person is older and so they’re not actually being passive-aggressive at me.” I think the increased understanding can go both ways.

It’s OK to be a bit older. I’ve accepted I’m not a teenager anymore. … It doesn’t mean that just because this is what the kids are doing means we all have to talk like that. But having increased understanding across different generations can help people avoid miscommunications in their text messaging — which is really what I’m trying to do with Because Internet.

On why she takes this sort of language seriously

For a long time, linguists have been arguing that the most interesting type of language is the informal speech that you produce when you’re not thinking about it, because when we do stuff fast and without seemingly thinking about it too hard, we access these levels of unconscious linguistic awareness that we all have. If you do something that’s filtered through an editor or filtered through more self-consciousness, you’re going to do something that’s more homogenized, more standardized and less interesting, because it doesn’t represent the … whole beauty of the world and everything that’s possibly out there.

And I think that informal writing online has similar things that make it very interesting. If we only analyze the language in books, we only analyze one type of language. If we analyze the language on the Internet, we can analyze so many different types of languages, so many different ways of talking and get a bigger picture of what it means to be a person — rather than just what it means to be the type of person who writes a book.

Mallory Yu and Emily Kopp produced and edited the broadcast version of this interview. Patrick Jarenwattananon and Beth Novey adapted it for the Web.