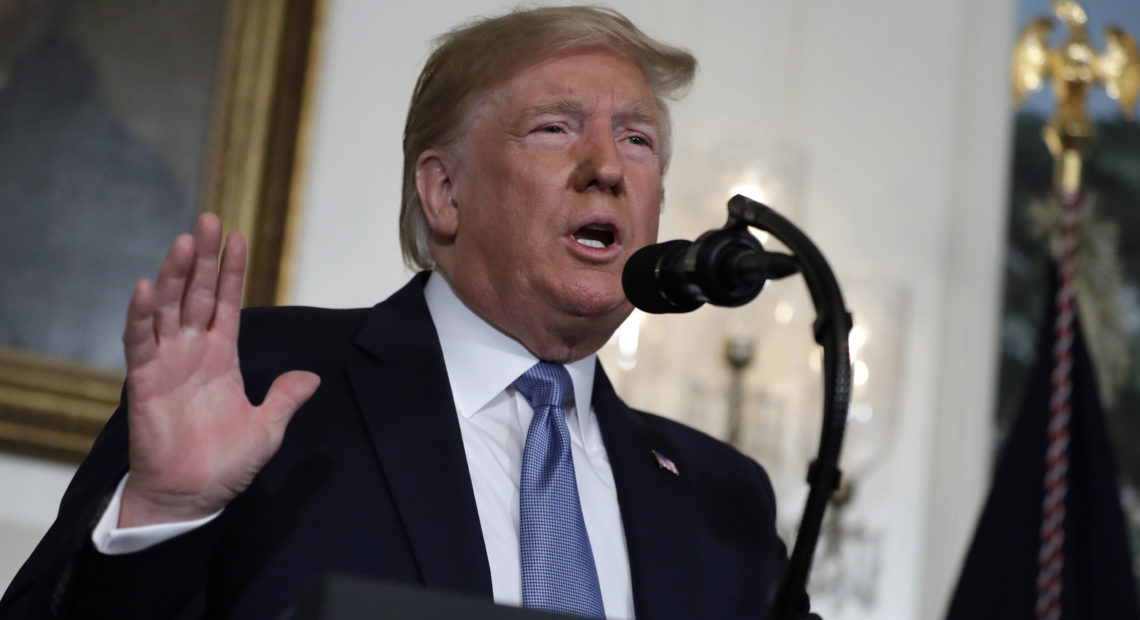 ‘Hate Has No Place’ In America, President Trump Says After El Paso And Dayton Shootings

Speaking at the White House, Trump said the nation is “overcome with shock, horror and sorrow.”

On Sunday, the El Paso police chief said it appeared increasingly likely that the shooter posted a white nationalist, anti-Hispanic screed online ahead of the attack.

“In one voice,” Trump said on Monday, “our nation must condemn racism, bigotry and white supremacy.”

On the issue of the death penalty, Trump said he would direct the Department of Justice “to propose legislation ensuring that those who commit hate crimes and mass murders face the death penalty and that this capital punishment be delivered quickly, decisively and without years of needless delay.”

Texas state prosecutors have already announced they will seek the death penalty in that shooting. On July 25, the Justice Department announced it would resume capital punishment after nearly 20 years.

Trump called for laws to ensure that those “judged a grave risk to public safety do not have access to firearms” and declared “mental illness and hatred pulls the trigger, not the gun.”

But he stopped short of addressing other measures that gun control advocates argue are urgently needed, including closing loopholes in required background checks for gun buyers and banning large ammunition magazines.

However, in a tweet earlier in the day, Trump seemed to open the door to such measures, but tied them to immigration overhaul.

“Republicans and Democrats must come together and get strong background checks, perhaps marrying … this legislation with desperately needed immigration reform,” Trump tweeted.

“We must have something good, if not GREAT, come out of these two tragic events!” Trump’s tweet concluded.

It’s not clear why Trump is now talking about linking gun legislation with immigration policy. Those have been two of the most politically intractable issues in recent years, with bipartisan efforts ultimately failing.

Trump blamed “gruesome and grisly” video games and the Internet for fomenting violence. He said it is “too easy today for troubled youth to surround themselves with a culture that celebrates violence. We must stop or substantially reduce this and it has to begin immediately.”

However, studies have failed to prove any direct link between video games and violent crimes.

Trump, speaking as Vice President Pence looked on, also said mental health laws should be changed to better identify “mentally disturbed individuals” who may be violent and potentially subject them to involuntary confinement. He called on social media companies to develop tools that can detect mass shooters “before they strike.”

Saying the Internet has provided “a dangerous avenue to radicalize disturbed minds,” Trump said. “We must shine a light on the dark recesses of the Internet and stop mass murders before they start.”

“Senate Republican Leader Mitch McConnell has called himself the ‘grim reaper’ and refuses to act on this bipartisan legislation,” the statement says. “It is incumbent upon the Senate to come back into session to pass this legislation immediately.”

Pelosi and Schumer also took Trump to task for apparently backing away from his earlier call for stricter background checks. “It took less than three hours for the president to back off his call for stronger background check legislation. When he can’t talk about guns when he talks about gun violence, it shows the president remains prisoner to the gun lobby and the NRA,” the statement said.

Earlier this year, the Democrat-controlled House passed two bills aimed at making the background check system more stringent, with the support of a handful of Republicans. One would require background checks for all person-to-person gun sales. The other would extend the amount of time gun dealers must wait for a response from the federal background check system. It is currently three days; the House bill would make it 10 days. The Senate has not moved to take up either measure.

In the wake of the shootings, Sen. Pat Toomey, R-Pa., tried to revive legislation he co-sponsored following the Sandy Hook school shooting to close what’s known as the “gun show loophole.”

“While no law will end mass shootings entirely, it’s time for Congress to act to help keep our communities safer,” Toomey tweeted. “We should start by passing bipartisan proposals such as my legislation with Senator Joe Manchin to expand background checks to all commercial firearm sales.”

The 2013 Toomey-Manchin bill was the last major bipartisan effort at new gun control legislation, and it failed to overcome a filibuster in the Senate.

In remarks Sunday in New Jersey on his way home from a weekend at his Bedminster golf resort, Trump talked about mental health as a factor in the shootings. That’s something he has done after past mass shootings as well. And it might also hint at an avenue for possible legislation.

Trump ally Sen. Lindsey Graham, R-S.C., is calling for a red flag law, also known as an extreme risk protective order. Some states, including California, have passed such laws allowing law enforcement to temporarily take guns away from people deemed a risk to themselves or others. President Trump’s daughter and senior adviser Ivanka Trump endorsed the idea as well on Sunday.

Since launching his presidential campaign four years ago, President Trump has vilified people coming to the country illegally, referring earlier this year to migrants seeking asylum as an “invasion.” The manifesto believed to have been posted by the shooting suspect in El Paso used similar language, saying “this attack is a response to the Hispanic invasion of Texas.”

In a statement, the FBI said the El Paso attack “underscores the continued threat posed by domestic violent extremists and perpetrators of hate crimes.”

Trump alluded to that as he spoke to reporters Sunday. “Hate has no place in our country,” Trump said. “And we’re going to take care of it.”

But critics have pointed to Trump’s own language as part of the problem. In a speech delivered from the Oval Office urging action on his proposed border wall, Trump, as he frequently does, painted immigrants as murderers, though crime rates among undocumented immigrants are lower than in the general population.

“Day after day, precious lives are cut short by those who have violated our borders,” Trump said before highlighting high-profile cases of violence. “How much more American blood must we shed before Congress does its job?”

At a rally in Panama City Beach, Fla., in May, Trump was again talking about the “invasion” of immigrants and a caravan of migrants near the border when he asked: “But how do you stop with those people?” Someone in the audience shouted loudly “shoot them.” Trump heard the person, chuckled and said that “only in the Panhandle you can get away with that statement.”

Administration officials push back on the idea that Trump or his rhetoric have any responsibility to bear, saying the only people responsible for these mass shootings are the people shooting the guns.

In a later tweet Monday morning, Trump seemed to blame the media for the rise in mass shootings. “Fake News has contributed greatly to the anger and rage that has built up over many years,” Trump wrote.

Trump was also criticized for misidentifying the site of the Ohio shooting at the end of his speech, saying, “May God bless the memory of those who perished in Toledo” — rather than Dayton.