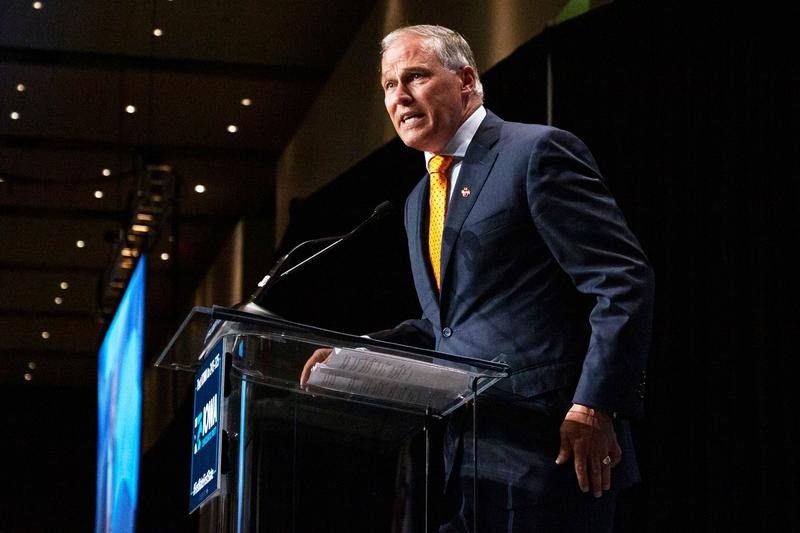 From campaign appearances in Iowa and Philadelphia to debate stages in Miami and Detroit, Washington Gov. Jay Inslee has been hopscotching the nation as a longshot Democratic candidate for president, focused on climate change.

It’s a grueling schedule that’s taken Inslee away from the state frequently and often for stretches at a time.

Since announcing his presidential bid March 1 through the end of July, Inslee spent all or part of 90 out of 153 days — or nearly 60 percent of the days, including weekends — traveling out of state on the campaign trail, according to a new analysis by public radio and The Seattle Times.

On several of his partial travel days, Inslee departed Washington state late in the day or returned early in the morning to focus on his official duties at home. On others, he was gone much of the day.

June was Inslee’s most travel-packed month. He was on the road for all or part of 24 days, during which he visited nine states spanning the nation from California to Florida.

During one seven-day stretch beginning May 31, Inslee flew from Seattle to Los Angeles to San Francisco to Des Moines to Detroit to New York City, before returning home.

Through a campaign spokesman, Inslee declined an interview for this story. However, in a statement his campaign said: “Gov. Inslee is sharing the Washington story across the nation, including on the national debate stage in front of tens of millions of Americans. As he travels, Gov. Inslee has highlighted Washington’s success in standing up to Donald Trump’s hateful agenda, leading the nation in economic growth, and progressive successes on 100% clean energy, paid family leave, minimum wage, and gun safety laws.”

On occasion, Inslee’s calendar indicates he conducted official business in his capacity as governor while traveling out of state. For instance, while in New York in March, he spoke at a renewable energy policy forum. And in April he testified before the House Environment and Climate Change Subcommittee in Washington, D.C. But the vast majority of his travel was for campaign purposes.

Inslee’s longest in-state stretches were an eight-day period at the end of the legislative session in April, and nine days in early May. But his calendar also reveals that even when he’s in Washington, there are days when he spent the bulk of his time on campaign-related business.

For instance, on March 29, Inslee’s calendar shows he spent most of the day on campaign-related calls, with the exception of a half-hour phone meeting with his gubernatorial staff preparing for upcoming Congressional testimony.

On other days, like June 6, Inslee returned to the state mid-morning and immediately launched into a day’s worth of official meetings and business.

When the governor travels, he’s accompanied by state troopers who are assigned to the Executive Protection Unit (EPU). From March through June, EPU travel costs totaled $312,724, according to the Washington State Patrol (WSP). 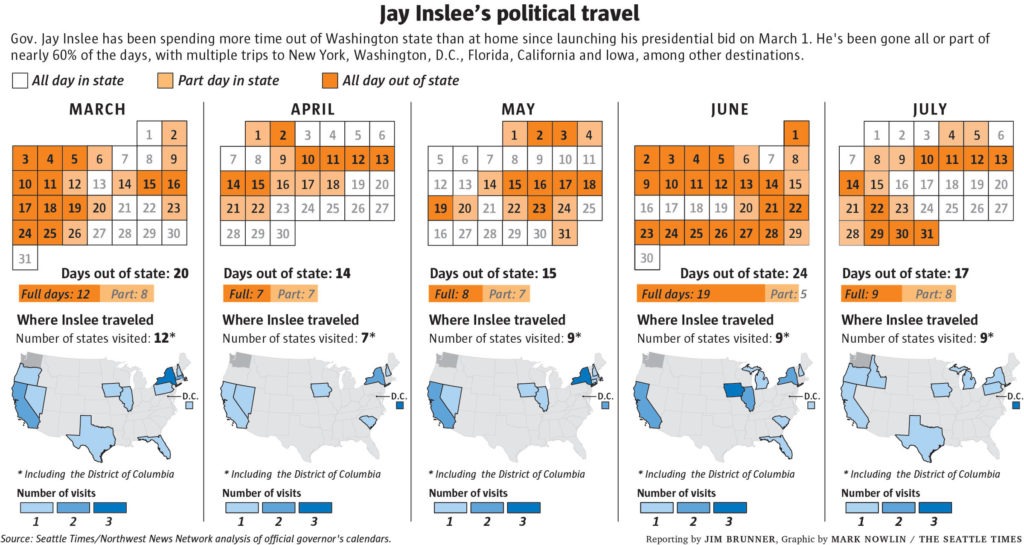 During that same period, EPU troopers collected $267,915 for nearly 3,500 hours of overtime. The Inslee campaign reimbursed the state for about $9,000 in security-related travel expenses, such as rental cars, as required by federal election rules.

Most of the more than $580,000 in costs were attributable to Inslee’s out-of-state trips, according to WSP.

By contrast, Montana Gov. Steve Bullock, who also is running for president, recently agreed to cover all of the costs of his security team when traveling for campaign-related business.

To reduce overtime and keep up with Inslee’s intense travel schedule, WSP has nearly doubled the size of EPU, adding six additional troopers, as well as a sergeant and a lieutenant position. The additional staffing will cost an estimated $4 million over the next two years, presuming Inslee stays in the race into next year.

In an interview with KING 5 News in June, Inslee was asked about the security costs associated with his campaign.

“We’re following the law, I’ve said we’re going to follow the law and I think that’s a good thing to do,” Inslee said.

Washington law directs the state patrol to provide security and protection to the governor, the governor’s family and the lieutenant governor “to the extent and in the manner the governor and the chief of the Washington State Patrol deem adequate and appropriate.”

In the same television interview, Inslee responded to criticism that he’s neglecting his gubernatorial duties by traveling so much as a national candidate.

“Well, look, the proof is in the pudding,” Inslee said. “We’ve had a very successful several months in our state. I stay in touch on an hourly basis … So this is an hourly thing with me. We have cellphones and they work really effectively.”

Inslee’s calendar shows he checks in with his chief of staff, David Postman, or other senior staff almost daily.

“And often more than that,” Postman said in a recent interview with the Northwest News Network and The Seattle Times. “Either he’s calling in here to my table for the executive team meeting or something else. … It’s a lot of phone time.”

However, Postman acknowledged that Inslee’s frequent absences mean he’s less available to meet with people coming through Olympia and has less time to do outreach across the state. Nonetheless, since March, Inslee has made trips to the San Juan Islands, the Methow Valley, the Bellingham area, Spokane and Vancouver.

Inslee’s July calendar also shows he was able to attend a staff and cabinet Summer Hawaiian Barbeque event at the governor’s mansion.

The governor’s absences from the state and the cost of his security have drawn criticism from state and national Republicans, who have mocked his campaign as a “vanity” run.

One recent fundraising missive from the Washington State Republican Party said: “our Governor has been traveling on the taxpayers’ dime … and blatantly refusing to do his job. Would your boss let you do that?”

“By forcing his constituents to foot the bill while he flies around the country speaking to empty rooms, Governor Inslee is proving on a daily basis that it’s time for a leadership change in Washington State,” the email states.

Inslee, who has spoken to packed rooms recently, has hinted that he may run for a third term as governor if his presidential campaign comes up short.

While Inslee’s pursuit of presidential ambitions raises his national profile, it’s unclear what price he may pay with his electorate back home.

“When an incumbent officeholder runs for president there gets to be some resentment within his or her home territory, and this is particularly true of governors,” said John Weingart, director of the Eagleton Center on the American Governor at Rutgers University.

Another potential risk, Weingart noted, is being away from the state if disaster strikes. That happened in 2010 to then-Gov. Chris Christie of New Jersey, who was with his family at Disney World when a massive snow storm clobbered his state.

“You do run that risk of being away, period,” Weingart said.

When Inslee is out of state, another statewide office-holder serves as acting governor. But Postman, Inslee’s chief of staff, said when there’s an emergency in the state, the governor is briefed and there’s always a plan in place to bring him home if necessary.

“That’s part of being governor is we always know where he is and how to get him back if we need to,” Postman said. “And we’ve had to.”

For instance, when the Oso landslide happened in 2014, Inslee was in Montana at a Democratic Governors Association event. He rushed home.

The future of Inslee’s presidential campaign remains unclear. Following the second presidential debate in Detroit, his campaign reported a surge of contributions pushing him over the 100,000 unique donors mark.

But Inslee has yet to qualify for the fall debates, which require candidates to have 130,000 donors and reach 2 percent in the polls.

For now, Inslee is pressing forward with his presidential ambitions. He spent the weekend campaigning in Nevada, and this week he’s scheduled to appear, along with 20 other presidential candidates, at the Iowa State Fair.

This story was reported in collaboration with The Seattle Times.