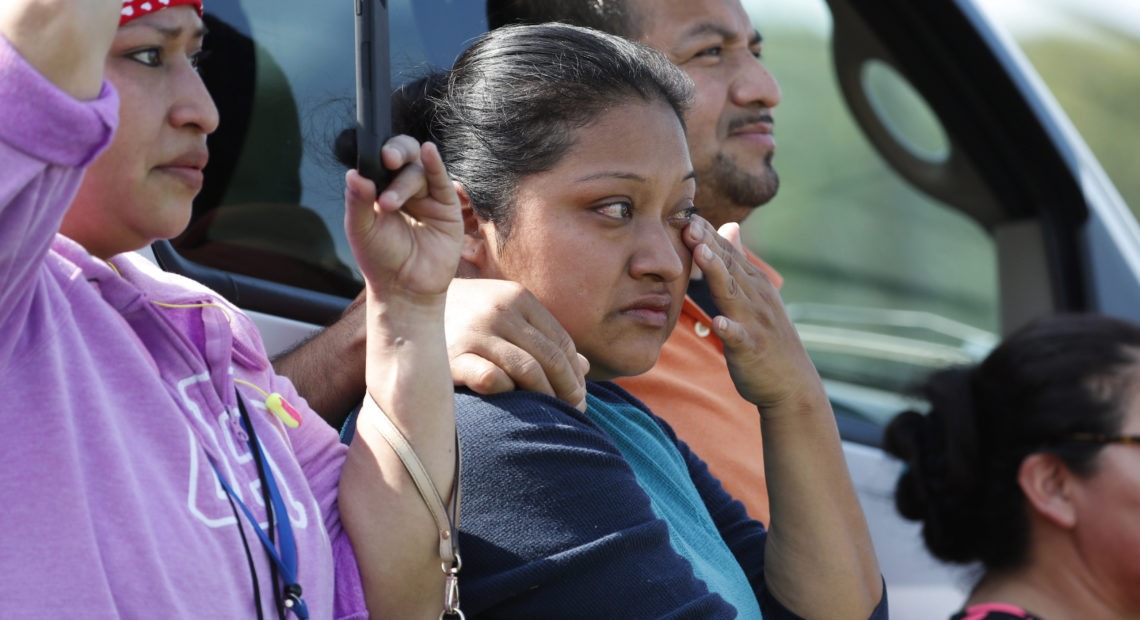 A day after U.S. Immigration and Customs Enforcement officers arrested nearly 700 people in sweeping raids at several food-processing plants in Mississippi, officials said Thursday that nearly half of those detained had already been released.

A total of 680 people were arrested, according to ICE, in what has been described as “record setting” raids in terms of size and scope. But a statement released Thursday by the U.S. Attorney’s Office for the Southern District of Mississippi said that approximately 300 of them had been released.

“Preliminarily, it appears that approximately 30 detained aliens were released yesterday on humanitarian grounds at the individual sites where they were initially encountered,” the statement said. “[A]nother 270 detained aliens were released after being processed by [Homeland Security Investigations] at the National Guard base in Pearl and returned to the place where they were originally encountered.”

“They were placed into proceedings before the federal immigration courts and will have their day in court at a later date,” ICE spokesman Bryan Cox said in an email to The Associated Press.

The procedures ICE followed in this week’s raids stood in contrast to President Trump’s “zero tolerance” policy of separating migrant children from their parents at the U.S. border. That policy came under widespread and harsh criticism.

Included among those released in the Mississippi raids were 18 juveniles, with the youngest being 14 years old, the news agency said, quoting Jere Miles, a special agent in charge of ICE Homeland Security Investigations in New Orleans.

The statement explained that detainees were “asked when they arrived at the processing center whether they had any children who were at school or childcare and needed to be picked up.” It said cellphones were made available for them “to make arrangements for the care of their children or other dependents.”

“[I]f HSI encountered two alien parents with minor children at home, HSI released one of the parents on humanitarian grounds and returned that individual to the place from which they were arrested,” the statement said. “HSI similarly released any single alien parent with minor children at home on humanitarian grounds and physically returned that person to the place where he or she was originally detained.”

“Based on these procedures, it is believed that all children were with at least one of their parents as of last night,” it added.

A plant owned by Illinois-based poultry producer Koch Foods in Morton, Miss., was among five plants targeted in Wednesday’s raids, which involved a total of about 600 ICE officers.

In a statement on Thursday, Koch — one of the country’s largest poultry producers — said it “is diligent about its compliance with state and federal employment eligibility laws including being an early adopter of the government’s own E-Verify program which screens new hires through the Social Security Administration, as well as the Department of Homeland Security to ensure they are compliant.”

The company said its Morton plant employs more than 1,000 people. Koch said that after Wednesday’s raid it was forced to temporarily halt production. It said it wasn’t yet sure how many of its employees had been detained by ICE.

“The company intends to continue to operate all shifts at the facility and minimize customer impact,” the statement said.