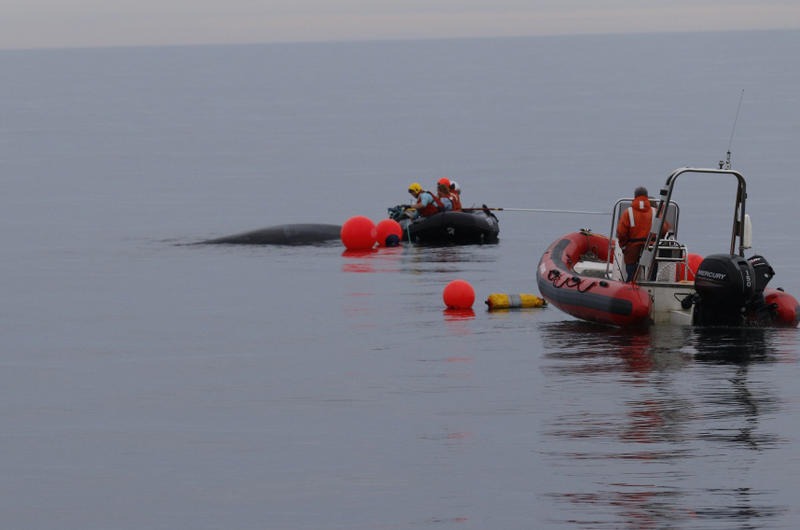 A badly entangled whale is swimming free again after a dramatic rescue off the Washington coast on Thursday evening. The 35-foot long humpback whale calmly allowed responders to cut it free of fishing gear, according to witnesses.

When responders arrived on scene near Cape Flattery, they found a young adult whale at the surface more or less “hogtied.”

“This whale had line through its mouth and down both sides of its body to its tail flukes and then wrapped around several times and something heavy weighting it underneath,” said Doug Sandilands, an entanglement response specialist with the group SR3. “That’s a challenging configuration.”

Sandilands guessed the whale probably swam into crab or shrimp pot lines.  He and biologist Jen Tackaberry of Cascadia Research were part of a team that approached the humpback in a small inflatable boat and cut the whale free using curved knives on poles, floats and a boat hook. They described the whale’s behavior as “docile” throughout the roughly 90-minute engagement.

“It wasn’t that sick,” Tackaberry told public radio on Friday. “So if it wanted to and was able to, it could have avoided us.”

After the whale was freed from the entangling ropes, it dived and swam away.

“We like to see that when we’re done with a whale,” Tackaberry said. “If they swim away, that means they’re healthy. Nothing is broken. They’re not too injured and usually it means good things for the survival of the animal as well.”

Entanglements like this are on the rise as populations of gray and humpback whales have rebounded from past whaling. For far this year, the National Oceanographic and Atmospheric Administration has recorded 14 confirmed cases of entangled whales and two unconfirmed cases along the West Coast. The entanglement numbers are pretty evenly split between humpbacks and gray whales.

Sometimes the entangled whales can wriggle free. Other times the government authorizes specially trained rescuers to spring into action to save a whale that might otherwise slowly perish.

“It’s tough to disentangle whales,” said NOAA Fisheries spokesman Michael Milstein in Portland. “Often they can’t be found or sea conditions don’t allow it. This time it all lined up.”

Milstein said a charter fishing captain from Todds Extreme Fishing deserves credit for noticing the entangled humpback and then staying with it until a Makah Tribe biologist and the U.S. Coast Guard arrived to keep tabs.

Sandilands called this rescue effort the most successful one he has participated in over the past three years in the Pacific Northwest. He said a half dozen prior callouts this year in Oregon and Washington waters resulted in fruitless searches to relocate whales that were reportedly entangled in fishing gear.

The California, Oregon and Washington crab fishing fleets have formed separate whale entanglement working groups with support from NOAA grants. Government regulators, researchers and other interested parties are also at the table for discussions about technological improvements, possible tighter regulation of crabbing seasons and locations, and voluntary “best practices” guidelines meant to reduce the risk of catching whales in the vertical lines that stretch between crab pots on the seafloor and marker buoys at the surface.

On Friday, U.S. Senators Jeff Merkley and Ron Wyden of Oregon announced that Oregon’s Department of Fish and Wildlife would receive a related $26,000 federal grant. The senators said the research grant would help ODFW gather data on where whale migration routes and the crab fisheries overlap, information that could be useful to guide future managment decisions. 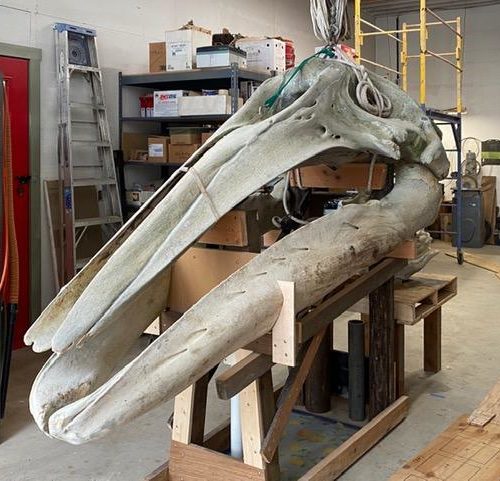 Last year, a couple who lives near Port Townsend, Washington, agreed to let the federal government drop off a dead gray whale to decompose on their semi-isolated beach. Now, the couple has a permit to keep the whale skeleton and will soon assemble the most amazing yard art. Continue Reading Dead Whale Left To Rot On Washington Beach Now On Its Way To Becoming Amazing Yard Art