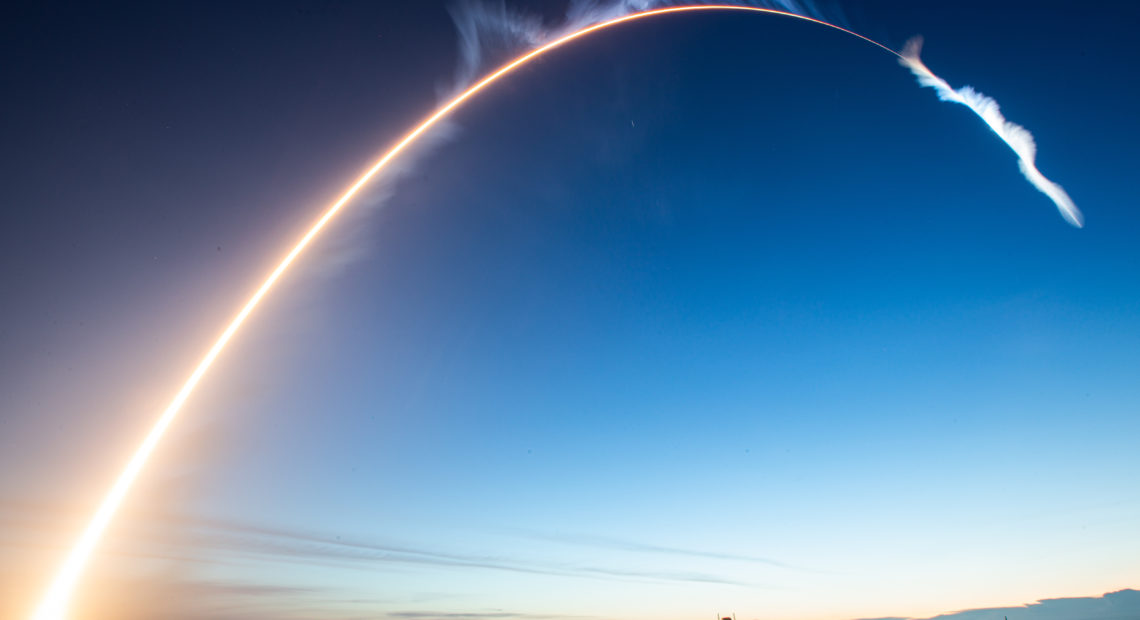 With Congressional Blessing, The U.S. Space Force Is Closer To Launch

It started as a joke.

Early last year, President Trump riffed on an idea he called “Space Force” before a crowd of Marines in San Diego.

It drew laughs, but the moment was a breakthrough for a plan that had languished for nearly 20 years.

“I said maybe we need a new force, we’ll call it the Space Force,” Trump said at Marine Corps Air Station Miramar in March 2018. “And I was not really serious. Then I said, ‘What a great idea, maybe we’ll have to do that.'”

But now, under a new name and with Congress’ support, Space Force is closer to becoming a new military reality. It would be the first new military service in more than 70 years.

Concerns About Russia And China

Since that time, military leaders, lawmakers and experts have warned that new resources were needed in space to get ahead of a potential, hostile nation setting out to destroy a U.S. satellite. Such a move could threaten our everyday lives, from our cell phones to the electric grid to the military’s ability to launch nuclear weapons.

As a result, proponents argue that the U.S. has fallen behind and needs to upgrade an existing Air Force office focused on space to become an official service.

“One of the main concerns is being able to develop a military space cadre who understands the space domain and understands threats to U.S. military space systems and some of those threats are developing already,” said Kaitlyn Johnson, a senior fellow at the Center for Strategic and International Studies. “Some of these are big and flashy anti-satellite weapons … Some of them are like missiles that are on the ground that shoot up into the air, target a satellite and physically hit and detonate and kill that satellite.”

So far, Russia and China are among the countries that have demonstrated the ability to destroy satellites. And in March, India joined the group when it destroyed one of its own satellites.

Such tests also add to space debris, triggering concerns of fast-moving particles that could now cause damage to a functioning satellite or worse.

Much of the threats in space are classified, but those in the know such as Defense Secretary Mark Esper, are publicly worried.

“I think what we are trying to do is recognize that space is no longer a place in which we support combat operations or from which we look down upon the world and see what’s happening,” Esper said during his July confirmation hearing. “It is now a warfighting domain. Not because we made it that way but because the Russians and Chinese are making it that way.”

Now, key lawmakers leading the charge have the support they need to make a new U.S. space service a reality. The House and the Senate have both proposed plans for Space Force in their versions of the annual defense bill.

And next month, a congressional conference committee could hammer out a final blueprint in its approval of the fiscal year 2020 National Defense Authorization Act.

“I’m excited that it looks like we’ll be able to have, really, the birth of a new service for the first time in 70 years,” said Democratic Tennessee Rep. Jim Cooper, a key architect of the plan. “Each warfighting domain should have its own capabilities.”

Trump “Took Our Idea And He Blew It Up”

In 2017, Cooper, now the chairman of the House Armed Services Committee subpanel on strategic forces, and Alabama Rep. Mike Rogers, now the subcommittee’s ranking Republican, spearheaded a bipartisan effort to create the so-called “Space Corps.” It was approved in the House version of the annual defense bill.

However, the move was met with plenty of resistance from top Pentagon officials and the Senate, where the effort died.

Cooper said he was was initially irked that Trump had virtually hijacked their idea but under a new name of Space Force.

“I was floored. And then I was annoyed,” Cooper said of his reaction to Trump’s first Space Force speech. But “imitation is the sincerest form of flattery.”

Cooper said Trump made the idea “unworkable,” by adding several elements to it that made it cost prohibitive. However, Congress has now put forth two versions of the plan that are not as costly as Trump’s original pitch.

“He took our idea and he blew it up,” Cooper said. “So I’m thankful now and the defense authorization bill we’ve gotten back to the original plan.”

House and Senate lawmakers must now decide between their competing visions for the new space service. That’ll happen during their conference committee meetings to hammer out a final version of the defense bill.

The House wants to install their so-called Space Corps in the coming year, while the Senate includes at least a one-year delay to stand up the new command under Trump’s Space Force name.

In both versions, the new service would be modeled after the Marine Corps under the Navy, and remain under the Air Force. It would be the first new military service since the Air Force was created in 1947 under President Harry Truman.

“With this new legislation … it’s remarkably similar to Rogers and Cooper’s original language to create a Space Corps,” said Johnson, the CSIS fellow who has studied the proposals. “So they’ve been able to build off this this legacy and their work on this and it’s looking like it’s about to come to fruition.”

Johnson is betting a new service will come together with the passage of the defense bill.

The Senate version also includes language for a stronger leadership model at the top, including a new four-star commander.

“I think we did the art of the possible,” said Sen. Kevin Cramer, R-N.D., who played a key role in crafting a stronger leadership model for the service, including a new, four-star commander.

Although Cramer supports the Senate version, he would have done without a delay to create the service and supported a “more aggressive approach.”

A Fight For A New Military Headquarters

With plans for a new space military service underway, there’s the potential for significant funding that would be focused on its efforts.

And in true congressional fashion, that’s set off a race of lawmakers vying to win the new headquarters to their states.

“There’s a lot of people who would like it,” said Washington Democratic Rep. Adam Smith, chairman of the House Armed Services Committee.

California, Colorado, Alabama and Florida are among those states in the running.

Even Alaska Sen. Dan Sullivan says he could see some of Space Force’s operations land in his state. Alaska is home to the country’s missile defense system and the radar tasked with tracking a potential attack and intercepting it.

Rep. Ted Yoho, R-Fla., argues that Florida is the right place because it’s the historic role in the space program and a vibrant private sector focused on space today.

Sen. Cory Gardner, R-Colo., however, says his state has an edge. That’s where major components of the existing Space Command under the Air Force exists today.

Still, House lawmakers say their focus is to ensure that the move will be largely a restructuring and not turn Space Corps into a “pork barrel” spending bill for some particular district.

Instead, it shouldn’t come without a large, unnecessary bill, said Smith. As chairman, Smith is slated to serve on the conference panel to hammer out the final version of the defense bill.

“I think we need to better emphasize space as part of our national defense,” he said. But “I don’t want to waste money, so we need to make sure there’s not too much bureaucracy and it’s done in an efficient and effective manner.”