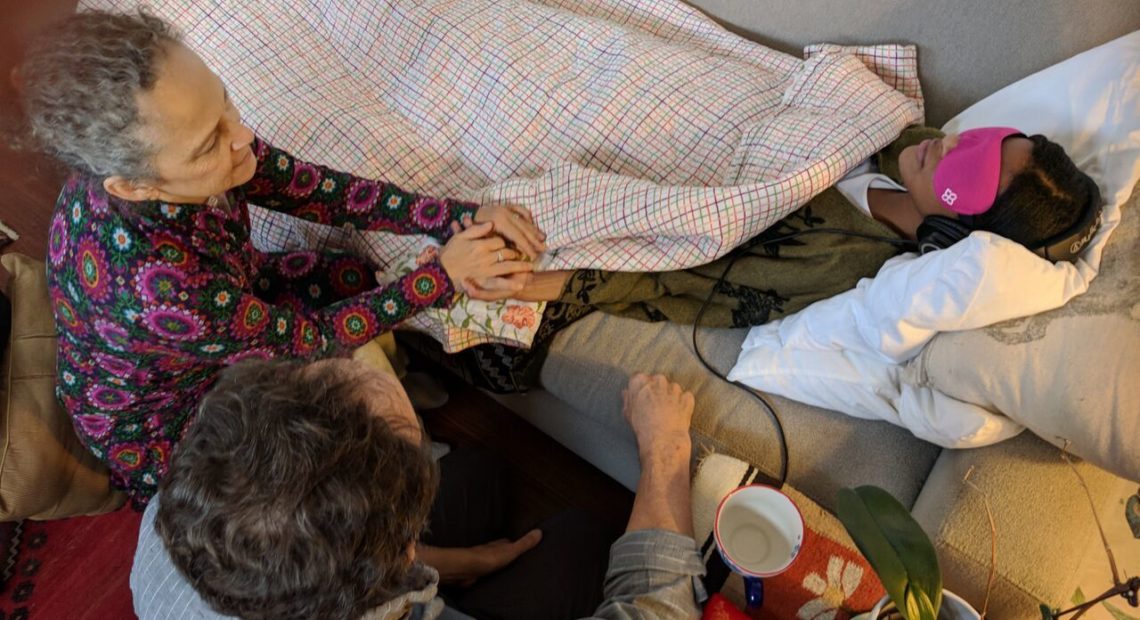 MDMA, Or Ecstasy, Shows Promise As A PTSD Treatment

PHOTO: Therapists Marcela Ot’alora and Bruce Poulter are trained to conduct MDMA-assisted psychotherapy. In this reenactment, they demonstrate how they help guide and watch over a patient who is revisiting traumatic memories while under the influence of MDMA. CREDIT: Courtesy of the Multidisciplinary Association for Psychedelic Studies

The first time Lori Tipton tried MDMA, she was skeptical it would make a difference.

“I really was, at the beginning, very nervous,” Tipton remembers.

MDMA is the main ingredient in club drugs ecstasy or molly. But Tipton wasn’t taking pills sold on the street to get high at a party.

She was trying to treat her post-traumatic stress disorder, with the help of licensed therapists.

Tipton was given a dose of pure MDMA. Then she lay down in a quiet room with two specially-trained psychotherapists, one woman and one man.

They sat next to Tipton as she recalled some of her deepest traumas, like discovering her mother’s body after a murder-suicide.

“In the embrace of MDMA,” as she describes it, Tipton could revisit this moment without the usual terror and panic.

“I was able to find such empathy for myself. I realized how much I was thinking this was my fault,” she says.

The synthetic psychoactive chemical MDMA is emerging as a promising — if unconventional — treatment for PTSD.

Scientists are testing how pharmaceutical-grade MDMA can be used in combination with psychotherapy to help patients who have a severe form of PTSD that has not responded to other treatments. Unlike street drugs which may be adulterated and unsafe, researchers use a pure, precisely dosed form of the drug.

It’s not yet available as a treatment for PTSD outside of clinical trials, but the success of early trials has proponents hopeful that the therapy could be available to more people in coming years. They’re aiming for approval by the Food and Drug Administration, which granted breakthrough therapy status to MDMA-assisted psychotherapy in 2017.

Researchers are now conducting Phase 3 clinical trials at more than a dozen sites throughout the U.S., Canada and Israel. Clinicians who treat PTSD are hopeful the next round of trials will show that MDMA treatment is an effective option to relieve their patients’ suffering.

“The problem is we haven’t had a new drug to treat PTSD in over 17 years,” says Sue Sisley, a physician and president of the Scottsdale Research Institute, based in Arizona. “There are certain illnesses that are just intractable and not responsive to traditional therapy, and we need to start thinking more broadly.”

But MDMA is a Schedule 1 controlled substance, which means that it currently has no accepted medical use and has a “high potential for abuse” (something that MDMA’s therapeutic proponents dispute). Because of that designation, the current research trials are privately funded by the Multidisciplinary Association for Psychedelic Studies, or MAPS.

‘Anywhere I would feel unsafe’

Tipton struggled for years with PTSD before she got treated with MDMA. She describes life with PTSD as “seeing the world through dirty goggles.”

“Anywhere I would feel unsafe,” the 40-year-old from New Orleans says. “I would feel like I had to always be vigilant because if I didn’t, something bad was going to happen.”

Tipton describes her 20s as a catalog of tragedy and trauma. It began when her brother fatally overdosed in her home, on his birthday.

After his death, she began caring for her mother, who struggled with mental illness. In 2005, Tipton’s mother killed two people and then herself. Tipton was the one who discovered their bodies.

“I completely just disassociated. I couldn’t believe what I was seeing,” Tipton says.

The traumas continued to pile up. The place she lived was destroyed when Hurricane Katrina hit New Orleans, and the following year, she was raped.

In the storm’s aftermath, she was formally diagnosed with PTSD, but at first, she didn’t take it seriously.

“Nearly everybody returning to New Orleans was being diagnosed with PTSD,” Tipton says.

As the years went by, Tipton had panic attacks and terrible anxiety. She tried everything to treat her symptoms: talk therapy, antidepressants, hypnotherapy, meditation and yoga.

Nothing worked. She went through life exhausted and apathetic, constantly triggered and struggling to be intimate with those close to her.

In 2017, Tipton came across an online ad in search of people with severe PTSD in New Orleans. Soon, she was enrolled in the Phase 2 clinical trials for MDMA-assisted psychotherapy.

MDMA and therapy together?

MDMA was first synthesized in 1912, and its therapeutic benefits were studied in the 1970s But those efforts stalled when the U.S. federal government — in light of the growing popularity of ecstasy as a recreational drug — designated it a Schedule 1 drug in 1985.

In recent years, research has resumed, funded by private sponsors such as MAPS.

The treatment protocol in the current trial calls for a 12-week course of psychotherapy with specially-trained therapists. During that time, there are two or three daylong sessions, which begin with the patient swallowing a calibrated dose of MDMA in pill form.

A team of two therapists, generally one man and one woman, then guides the patient through the eight-hour MDMA “session.” Later, there’s follow-up talk therapy, without the drug, to help the patient process any feelings, thoughts or impressions that came up while under the influence of the drug.

“MDMA allows you to contact feelings and sensations in a much more direct way,” explains Saj Razvi, a Colorado-based psychotherapist who was a clinical investigator in the Phase 2 trials.

It’s not completely understood how MDMA works on the brain. The psychoactive drug boosts chemicals like serotonin and oxytocin. It also tamps down activity in the amygdala, a part of the brain that processes fear. This may lead to a state characterized by heightened feelings of safety and social connection.

That allows patients to revisit traumatic memories and unpack those moments without triggering the same panic.

“Trauma happens in isolation,” Razvi says. “One of the things that MDMA does is, really, lets you know that you are not alone.”

Razvi has observed hundreds of hours of these sessions and says they can sometimes look tough, almost like a “bad trip,” but the process leads to emotional breakthroughs that otherwise “may take months or years to accomplish.”

After the Phase 2 trials of MDMA-assisted treatments concluded in 2017, researchers found 54% of the patients who took MDMA had improved to the point that they no longer fit the diagnosis for PTSD (compared to 23% in the control group). In addition, the beneficial effects of the treatment appeared to increase, rather than wane, over time. A year later, the number who no longer had PTSD had risen to 68% percent.

“That was astonishing,” says Sisley of the Scottsdale Research Institute. “Even with the best pharmaceutical regimen, you rarely ever see patients go into remission.”

Sisley studies alternative treatments for PTSD and recently completed a clinical trial testing cannabis as a treatment for the condition among veterans. She says she hopes to offer her patients MDMA-assisted psychotherapy as soon as possible, maybe before the drug receives full FDA approval.

Brad Burge, a spokesman for the MDMA trial sponsor, the Multidisciplinary Association for Psychedelic Studies, says the organization is working to get the FDA to include the drug in its expanded access program, which can allow individual patients to be approved to use drugs that are still being studied.

“People with PTSD have an especially hard time with psychotherapy because they’re being asked to recall in detail, and process and think about literally the scariest thing that’s ever happened to them,” he says.

Burge says the goal is to make MDMA-assisted psychotherapy available as a prescription treatment in a specialty clinic to anyone with PTSD.

MAPS is working now to persuade public and private insurance plans to cover the treatment, Burge adds. He estimates that for patients paying for it entirely out of pocket, the cost of a 12-week course of treatment would run between $5,000 and $10,000. Most of the cost is for the guided therapy, not the actual drug.

Tipton describes her treatment with MDMA as transformative.

She was able to let go of the troubling feelings surrounding her mother’s death.

“This is a terrible thing that happened, but carrying the fear and shame over this, it’s worthless,” she says.

She unearthed other memories, too, feelings of joy that had been sealed away, like playing in the snow with her brother when they were children.

“I could remember exactly how I felt, that excitement of the first snow,” she says.

By her last MDMA session, Tipton was even able to talk about her sexual assault.

A year later, she was reassessed and no longer qualified as having PTSD. Tipton says she believes the treatment saved her life.

“Everything is at my fingertips for me in a way that it never was before,” she says. “I want that for everybody.”

This story is part of NPR’s reporting partnership with KJZZ and Kaiser Health News.