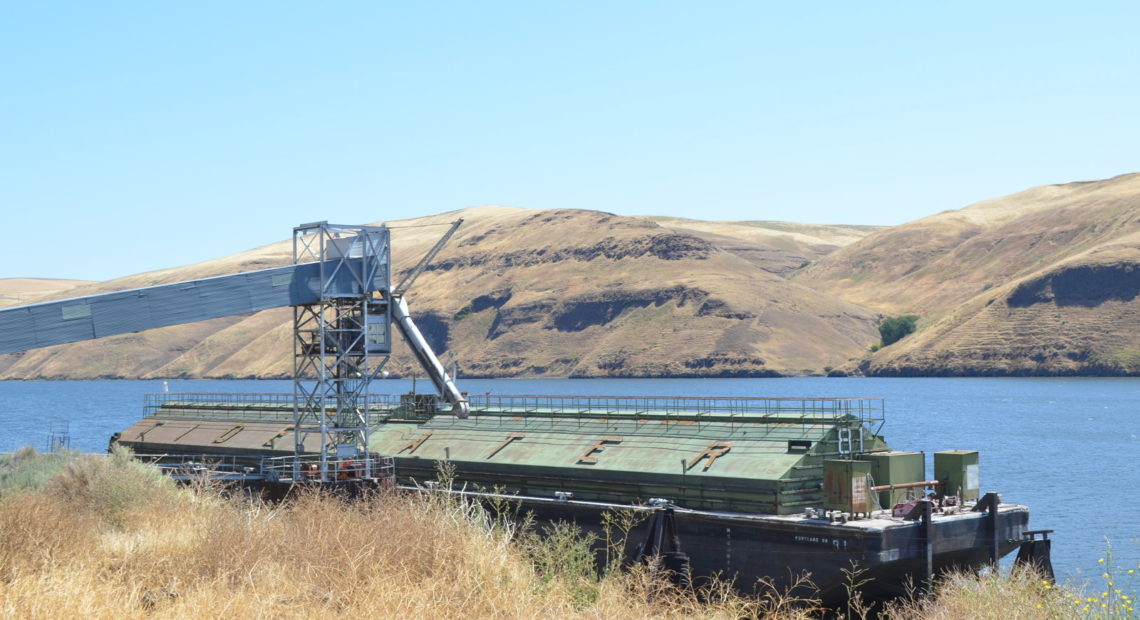 In the southeastern corner of Washington, wheat travels down the river, while salmon are trucked up around dams on the road.

“And taxpayers pay for all of it,” said Sam Mace, with Save Our Wild Salmon.

“Isn’t there some option of switching this around,” Mace asked, “the fish on the river and the wheat off the river?”

In Western Washington, it could seem like a no-brainer: The orcas of the Salish Sea are hungry, because there are fewer and fewer of the salmon they depend on. Removing the four dams on eastern Washington’s Snake River would help the salmon that use the river to spawn — and thus the whales that eat the salmon.

But the view from eastern Washington is different. The dams are important to the state’s wheat growers: fourth- and fifth-generation farmers who are worried about their future.

Chris Shaffer is one of those farmers. He’s a fifth-generation wheat grower with a 5,000-acre farm near Walla Walla, in the heart of wheat country. He grows a variety of wheat called soft white.

Wheat is one of the pillars of eastern Washington’s economy: the crop brings in $700 million. That’s more than any other, except apples.

The vast majority of that wheat gets exported, most of it to Asia.

Tribal canoeists on the Memorial Bridge in Lewiston, Idaho, on the Clearwater River just before the confluence with the Snake River. The group joined the larger Free the Snake “flotilla” demonstration, Sept. 7-8, 2018. CREDIT: MIKE BEISER/AP

The trick is getting all the wheat to Seattle and Portland so it can get shipped across the ocean.

Some of it goes by rail, but more than half of it goes by barge, floating down the Snake River and then the Columbia River to Portland.

Without the dams, the Snake River would be too shallow for barges, and Shaffer is worried that rail and truck aren’t good alternatives.

“You’re not going to move (all of Washington’s wheat) by road economically to Portland or Seattle,” he said.

But environmentalists west of the Cascades have seized on dam removal as a way to help the Southern Resident orcas.

Sam Wasser is a conservation biologist at the University of Washington who studies the whales. He said recovering the Snake River’s salmon runs would help get the starving orcas some food during their hungriest months: the early spring, when the whales are exhausted from a cold winter spent foraging up and down the Pacific Coast.

“Those fish have become extremely important to replenish these whales from the harsh winter,” Wasser said, “but also to sustain them until the Fraser River run peaks in the middle of August.”

Mace, with Save Our Wild Salmon, said that with the proper planning and investment it would be possible to move Washington’s wheat crop without barging on the Snake River.

he said taxpayers could help wheat farmers by improving roads and building more railways. Some of that’s already happening.

She said rail infrastructure, like unit train loaders, are being built. That could help get the grain to the Tri-Cities, where it could get loaded onto barges bound for Portland.

Economists say there’s an argument for moving barge traffic to the rail system; it’s a question of who would pay and how to compensate farmers if, in the absence of competition, the railways raised their rates.

The state is studying how best to help the people who would be affected if the four lower Snake River dams were removed.

The state itself can’t take the dams out, though; only the federal government can. Federal agencies are also weighing that option in an environmental impact statement that opens for comment this coming February.

Farmer Shaffer said he’s skeptical that taxpayers will make him whole, and he’s worried about what dam removal would mean not just for the economics of wheat farming but for his whole way of life.

“There’s going to be a whole bunch of people that aren’t going to farm wheat anymore,” Shaffer said. “A lot of small towns in eastern Washington — they’re wheat towns. I mean that is why they’re still there.”