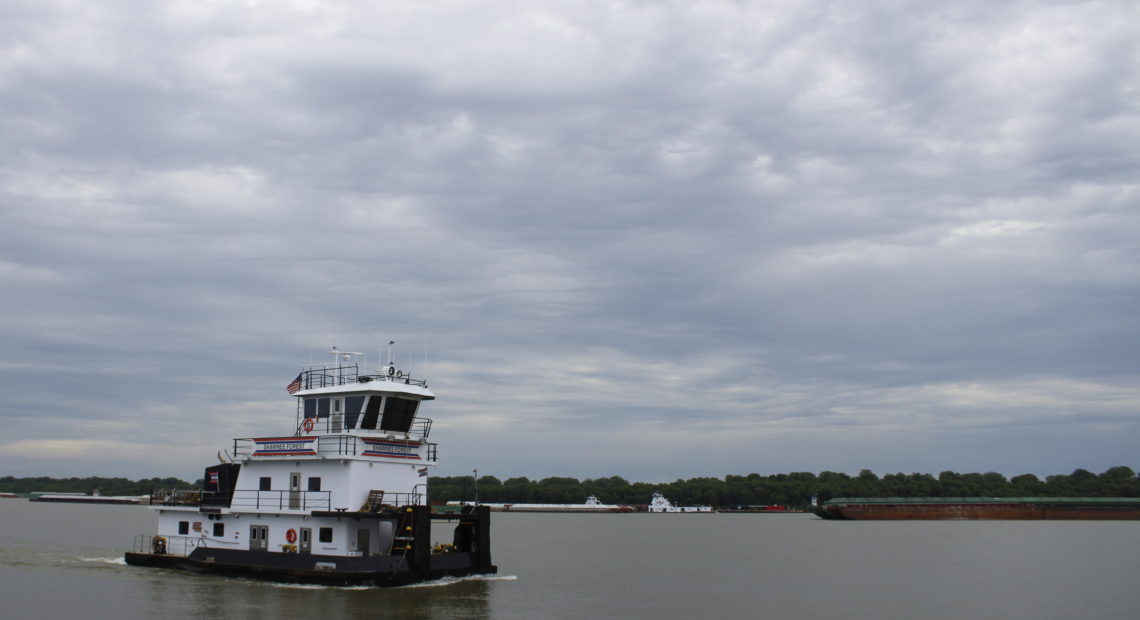 A standard river barge can hold about the same amount as 60 semitrucks. In early June, 642 of them had floated to a standstill near American Commercial Barge Line’s office outside Cairo, Ill.

“That’s just me. That’s not the other fleets in the area,” said Mark Glaab, facility manager there. “That’s just ACBL.”

Businesses and farmers around the Midwest rely on cheap river deliveries to make money on a global scale. High water this summer stranded barges for nearly three months on the upper Mississippi River — the longest time in recorded history. Barges have since started moving again and the long barge lines have largely cleared up, but during the standstill products on barges around the Mississippi River system couldn’t reach their buyers.

The barges floating near Glaab’s facility were full of salt, fertilizer and steel, among other things.

“I get three or four calls a day,” he said. “People wanting to be able to unload their barges here into trucks or into trains because we can’t go onto the river until the water goes down. I got plants in Chicago running out of product.”

“It seems to get worse every year”

The problem wasn’t just high water — it was the locks and dams. Locks are the mechanisms that raise or lower a boat to get it through a dam. When river levels are too high, they’re not safe to operate, so barges can’t get where they need to go.

There’s another problem: Barges can’t unload in some places where they’re stuck. Cairo, for example, doesn’t have a port. Goods can’t be offloaded onto trains or trucks there to finish out their journey. This could be a growing problem as water levels trend upward and barges are kept waiting longer.

“The only difference this year is the length of time, but it seems to get worse every year,” Glaab said, adding that 75% of recorded river crests at Cairo have happened since the 1980s.

Ports could do more than just help farmers and businesses waiting on supplies, though. It could give rural places like Cairo a boost. It’s a town with about 2,000 people, no grocery stores and no gas stations. Larry Klein is a fourth-generation Cairo resident and is helping lead efforts to get a port built there.

“I’ve seen it in its heyday, and I see it today. And well, it hurts. I want to stay around and say that I knew the people that helped get us back on the right track,” he said.

While barges and supplies were trapped going upriver, thousands of tons of grain such as corn and soybeans were waiting to head downriver to be shipped overseas. Just shipping the grain with trucks or trains was far too expensive for most. All they could do was wait.

Greg Guenther farms near St. Louis, and he said the river closure cost him in ways that are hard to calculate. Like many others, he still had grain to ship from last year. If grain is stored for too long, its quality drops along with its value. When the Mississippi was flooding, river terminals stopped buying his corn to send downriver, which nearly cost him in grain quality and did cost him in lost cash flow.

“That corn sitting in the bin is money that’s waiting to be utilized,” he said. “It is drawing no interest, and it’s costing you in electricity and everything else to keep it in condition.”

“If we had a more efficient river transportation system, when these events happened, when we finally were able to get going again, it would really make things a lot smoother and cost everybody a lot less money,” he said.

This reporting was made possible, in part, by a fellowship from the Institute for Journalism & Natural Resources.