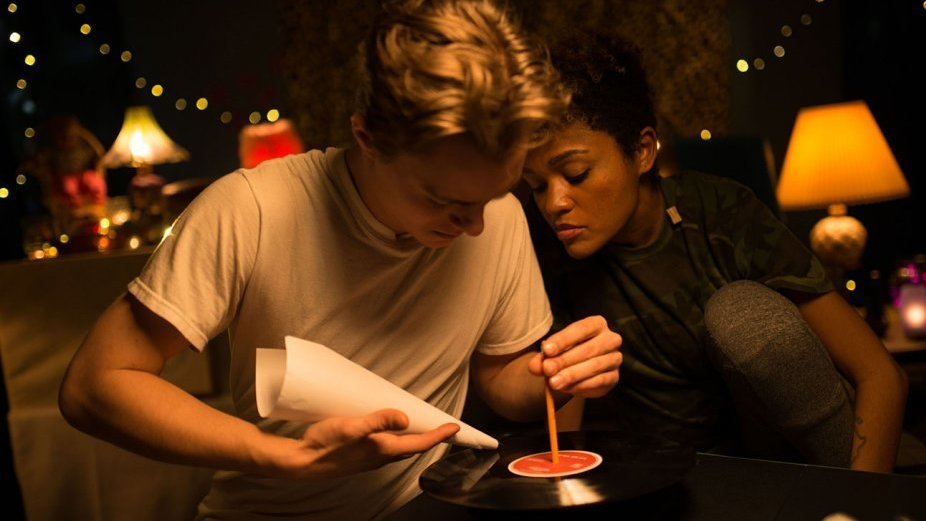 FILM REVIEW: ‘Give Me Liberty’ Is A Brilliant, Transporting Movie About A Medical Driver’s Busy Day

There are precious few victories to be found in Give Me Liberty, and yet the film feels victorious all the same. This madcap day-in-the-life indie about a medical transport driver, shot in Milwaukee with a cast of almost entirely nonprofessionals, walks a fine line between exuberant comedy and stress-inducing nightmare, yet ultimately endorses the idea that surviving another day in America is enough to feel good about.

It follows Vic (Chris Galust), the eternally put-upon driver; he’s also a Russian immigrant, and therefore the nexus of a sprawling social group of other low-income Russians. Vic has a packed client list and precise time-windows to hit. But his desire for order and purpose is undermined by the chaos of life on the margins of a city, where big problems seem to keep getting stuck in tiny spaces, like the mattress he finds halfway jammed through the front door of a client’s house. Well, who knows how it got there, but someone’s gotta move that thing.

We meet Vic just before dawn; he has barely woken up and is already late, the deck always stacked against him. The crises mount swiftly. His grandfather tries to cook a chicken that will soon set their apartment on fire and lead to their likely eviction. The elderly Russian-Jewish neighbors in their building are trying to get to a funeral, but their ride isn’t here. So they barrel into Vic’s van (“Be a mensch!”), upending his route while belting tunes with an accordion. Vic’s regular passengers, including the pretty, outspoken Tracy (played by social media influencer Lauren “Lolo” Spencer, who uses a wheelchair and is a true revelation here), don’t appreciate the intrusion, but they’re stuck with him all the same. “They depend on me,” Vic tries to explain, mid-drive. “I depend on you,” Tracy retorts.

Should they all have to depend on him? That question rides just under the surface of the film. Vic and his ugly white van are carrying the burden that has been dropped by so many others up the chain, from his resource-strapped employer, to the housing policies that have made Milwaukee the most segregated city in the country, to the American social welfare system writ large. He’s the only one left who cares about the people on the ground, and that makes him both the glue that holds these marginalized communities together and the easiest target of their wrath. In a landscape full of indelible characters, Vic’s inscrutability seems out of place, until you realize that beneath all his exasperations, he, like so many people in this world, enjoys knowing that other people need him.

Give Me Liberty‘s director, Kirill Mikhanovsky, based the film on his own experiences as a medical transport driver in Milwaukee. He and his producing partner and co-writer Alice Austin find the human comedy buried within these kinds of massive, failed bureaucratic systems: When you’ve got no hope of getting home on time, all you can do is joke about it. Some of the biggest laughs come from a mix of exasperation and determination, as when the Russians finally reach their gravesite hours late but insist on going through with the service anyway, only to find… well, it’s not to spoil.

Though we spend most of the film crammed inside that van, the brilliant script nevertheless helps us understand the world outside it. Huge swaths of Vic’s route are blocked off due to street protests following police shootings in the city’s black neighborhoods (Milwaukee was the site of similar large-scale protests in 2016). A motormouth stranger named Dima (Maxim Stoyanov) claims to be a long-lost nephew of the deceased but has other motives on his mind (the contrast between his slick leather jacket and Vic’s neon green safety vest is hard to miss). And in the film’s loveliest sequence, the characters take a much-needed respite at a social center (Milwaukee’s real-life Eisenhower Center, which runs a vocational training program for people with disabilities) to partake in a talent show and goof off with the residents.

You can easily imagine what the bad version of Give Me Liberty would’ve looked like — all these atypical characters finding common ground over a series of hijinks and contrivances. There’s even a brief scene where folks from two different cultures bond over fried chicken, like a certain widely derided Best Picture winner. What makes it not that film? First, there is the authenticity. The director and cast have lived these lives. They know how to make light of them, to portray them honestly while finding the joys and insights that would elude less attentive filmmakers. Their resolve to realize their vision in a film-unfriendly state, in the middle of an Upper Midwest winter, shines through in the loving care they give to their environment.

And second is the pulse, the drive that all of these characters have to accomplish some small thing that gives their life meaning, whether it’s just getting to work or delivering a present to a boyfriend who may not appreciate it. You feel it as Vic barrels down the city’s backroads, refusing to kick anybody out of the van before their time, and you feel it as Tracy, late in the film, walks a few difficult steps in order to sit down with her family for dinner — a scene that Spencer imbues with the sort of low-key, everyday grit that defines the whole endeavor. Though it’s shot in a mad scramble, dipping briefly into black-and-white and at one point actually assuming the POV of a couch being hauled out of a tight apartment building, Give Me Liberty sees the sunlight beyond the anxiety. If it’s not exactly an optimistic movie, it’s at least a tenacious one, and that, ultimately, is what makes it feel like an American dream.