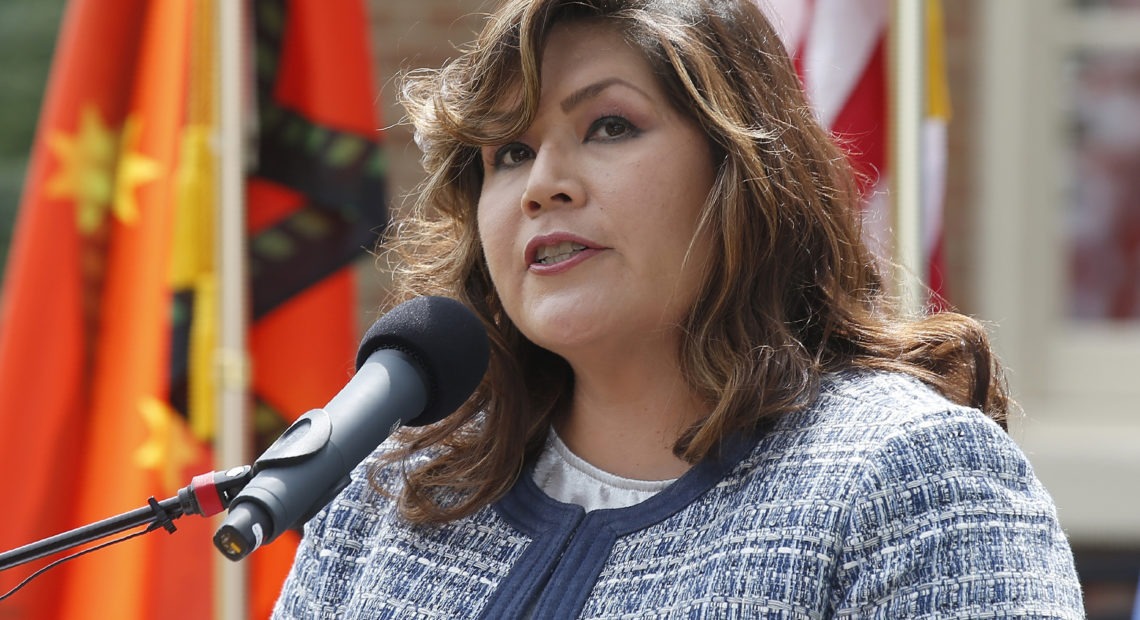 The Cherokee Nation has named its first ever delegate to the U.S. House of Representatives. Former Obama appointee Kimberley Teehee’s nomination was approved by the tribe’s council on Thursday. Although the treaty that created this non-voting position is almost 200 years old, it’s never been filled.

The article outlining the right to a delegate is in the Treaty of New Echota. The 1835 treaty is also the document that led to the Trail of Tears, something that has been top of mind for Teehee. She points out the treaty gave up the Cherokee’s homelands and cost the tribe thousands of lives.

Kimberly Teehee is being nominated by Cherokee National Principal Chief Chuck Hoskin Jr. as a delegate to the U.S. House of Representatives.
CREDIT: Sue Ogrocki/AP

“Literally blood sweat and tears,” Teehee said. “We can’t ignore that history and what it meant for us to have a provision like that put in place given the devastation that occurred and the deaths that occurred.”

Teehee grew up in Oklahoma and cut her teeth in politics in the 1980’s interning for Wilma Mankiller, the first woman to become chief of the Cherokee Nation. Mankiller led the tribe at a time when it was reasserting its sovereignty on both a state and national level. Teehee says watching Mankiller become one of the most effective Cherokee chiefs in modern history was inspiring.

“She let me go to meetings with her, I got to travel with her, got to research for her,” she said. “She was so hands on with me, I loved it.”

Mankiller advised Teehee that when she returned to college from her internship, the young woman should consider getting a law degree. “Because there’s a lot of Indian issues being litigated in the federal courts, and those decisions are having an impact on tribes, and it’s going to become more complicated to lead,” Teehee said.

Teehee would go on to get that law degree, and later she worked for the Democratic National Committee, as a Hill staffer and then an Obama appointee. Teehee has been an outsized figure on Capitol Hill for decades when it comes to Indian Country policy. Her fingerprints are on a wide variety of policy and laws affecting Indigenous people, from the Violence against women act to the creation of Congress’s first Native American caucus.

As a delegate in Congress who can attend committee meetings, Teehee would have the opportunity to not just advocate for the Cherokee Nation, but for all tribes, said Lindsay Robertson, who teaches federal Indian law at the University of Oklahoma College of Law.

“You’d have somebody in the halls of Congress, all the time, with access and rights of participation and debate who is raising Native American issues constantly,” he said.

The appointment still needs congressional approval, and Robertson says it will likely take time for Congress to figure out exactly how to seat Teehee. But the treaty language is very clear: the Cherokee Nation is entitled to a delegate.

One thing that could help Teehee’s chances of being seated is her reputation on the Hill for bipartisan work. She has close relationships with Oklahoma Republicans Markwayne Mullin, also a member of the Cherokee Nation, and Tom Cole, a member of the Chickasaw Nation.

Newly-elected Chief of the Cherokee Nation Chuck Hoskin Jr. made Teehee’s appointment one of his administration’s first priorities. He said her ability to reach across the aisle on a number of important areas for Indian Country is what led him to choose Teehee for the position.

“One thing that I have learned is that you never know what the next issue will be, and so we need somebody that is nimble, has studied up on the issues and is a quick study when those things come up,” Hoskin said.

For her part, Teehee says she understands her appointment will help bring visibility to a nearly invisible part of American society. And that could have a lasting impact on areas like Indian Health Services funding, education expansion on tribal lands and treaty rights, like the one that led to her appointment.

“The education piece of it also means, ‘What do treaty rights actually mean?’ Why do these old documents still live today?'”

In this case, the Treaty of New Echota, a document that led to the horrors of genocide nearly 200 years ago, could today lead to a new chapter in relations between the U.S. and the Cherokee Nation.