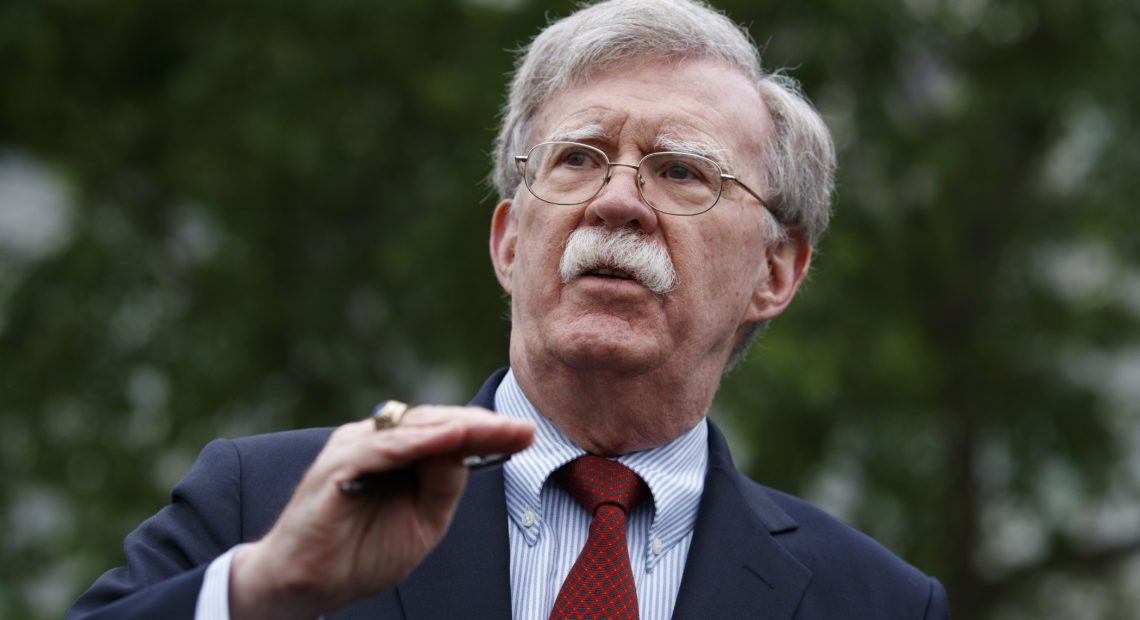 Bolton responded with his own post on Twitter asserting that he had initiated the idea that he would step down, but that Trump decided to wait until the following day.

Bolton was Trump’s third national security adviser and continued the pattern of departures by advisers who proved a bad fit for a White House led by the rare president with no prior experience with the military, national security or elected office.

Deputy White House press secretary Hogan Gridley told reporters that Bolton’s deputy, Charles Kupperman, now will serve as an acting national security adviser. As a protege of Bolton, Kupperman is unlikely to last very long in the job; Trump said he would name a new adviser next week.

The position does not require Senate confirmation so Trump can pick whoever he likes, but it was unclear on Tuesday who the White House considers to be among the potential candidates.

As for Bolton, his “priorities and policies just don’t line up with the president,” Gridley said. “There is no one issue here … they just didn’t align on many issues.”

The summit that never was

The dismissal followed a head-spinning turn of events that began over the weekend with an announcement on Twitter by Trump that he had invited delegations from Afghanistan, including the Taliban, to Camp David for peace talks — but then canceled the meeting before it could take place.

Trump then told reporters at the White House on Monday that he considered the peace negotiations to be “dead.”

The president appeared to have taken on the Afghanistan portfolio himself and cut some of his advisers — including Bolton — out of the matter.

Tensions reached a point at which Bolton reportedly was excluded from meetings about the war in Afghanistan, an issue that might otherwise have obviously fallen into the purview of the national security adviser.

But Trump had become a dove and wanted to reach a peace agreement that would permit the withdrawal of most or all American forces from Afghanistan.

The president’s allies felt they couldn’t trust Bolton not to blow up the process, in the way Bolton also may have complicated earlier talks by pushing for a tougher stance with North Korea.

At one point, special envoy Zalmay Khalilzad would not agree to let Bolton take a draft copy of the Afghanistan agreement out of the conference room where they were meeting, The Washington Post reported.

“I knew there were some concerns about the whole Taliban meeting but I didn’t know for sure,” Sen. Lindsey Graham, R-S.C., told reporters on Tuesday.

Graham, a sometime ally of the president but who has been skeptical of the Afghanistan talks, said he thought Trump should have the adviser he wants in the job.

These kinds of differences between Trump and Bolton eventually spun the two men too far apart.

“The president been signaling his displeasure with him for a while,” said Fernando Cutz, who served as senior director at the National Security Council in the Trump administration until last year.

“We saw a lot of the telltale signs that the president uses when he doesn’t like somebody being used on Bolton for a while now — isolating him from meetings, sending him to Mongolia when he went to North Korea [and] sending him to Warsaw when he wanted to make a key decision on the Taliban.”

Bolton’s aggressive positions on Venezuela, North Korea and Afghanistan clashed with the comparative reluctance of his boss to entertain new confrontations and his enthusiasm about winding down some old ones.

Trump promised to cut bait on the long-running war in Afghanistan, faulted the U.S. invasion of Iraq and rattled the foundations of America’s security posture around the world, including its forward deployment of forces and system of alliances in Europe and Asia.

Bolton, meanwhile, communicated in old-school terms to leaders in Caracas, Pyongyang and Tehran with threats about the prospect of direct action by the U.S. military.

In one episode, he displayed a legal pad that mused about sending the equivalent of an Army brigade to Venezuela’s neighbor, Colombia.

During a chill in relations with Iran, Bolton couched the long-planned deployment of an aircraft carrier, the USS Abraham Lincoln, as a quick response to ostensible threats by Iranian forces to American troops in the Middle East.

U.S. commanders also sent other units, including B-52 bombers, in what they called a move to try to deter an Iranian attack.

And Bolton also was said to have been a crucial force in torpedoing an agreement between Trump and North Korean dictator Kim Jong Un, seeking broad concessions from Kim about his weapons of mass destruction.

The sum of positions like these and others was a national security adviser with a view about American strategic ways, means and goals that wound up at stark odds with that of the president.

“In all three” — North Korea, Iran and Venezuela — “Bolton wanted a war and the president didn’t,” Cutz said.

Trump administration officials have been quoted for some time in press reports describing the unease with which the president began to see Bolton’s moves.

Trump appeared to have been focused elsewhere, including on trade negotiations with China, and then become dismayed when he checked back in with the issues in Bolton’s portfolio.

Trump, who has mocked what he has called the wasted sacrifice and money involved with America’s wars in the Middle East — especially since the United States hadn’t taken any oil for itself or some other economic recompense — was not pleased to see news coverage about Bolton bringing the United States to the brink of a crisis with Iran.

Trump eventually admitted that, for as much as he said he liked Bolton, he was aware of his own need to rein him in.

“He has strong views on things but that’s OK. I actually temper John, which is pretty amazing,” Trump said on May 9. “I’m the one that tempers him. That’s OK. I have different sides. I have John Bolton and other people that are a little more dovish than him. I like John.”

The mustache and the line

Bolton followed Army Lt. Gen. H.R. McMaster — a widely respected but straight-laced strategist who never clicked with Trump personally — and retired Lt. Gen. Mike Flynn, who was forced out of the administration early as part of the Russia imbroglio.

Bolton already was a well-known conservative apostle of intervention and regime change who had earlier served as ambassador to the United Nations in the administration of President George W. Bush.

He went on to became a senior fellow at the American Enterprise Institute and served as a commentator in the press and on Fox News when McMaster’s departure created the opening for him in early 2018.

Trump liked Bolton’s TV appearances and sought his counsel unofficially before bringing him formally into the administration. Bolton reportedly was instrumental in shaping Trump’s tough Iran policy even before he reentered the government.

He might have been recruited even sooner, but the president’s hand was reportedly stayed for some time, in part because of Bolton’s mustache.

Once Trump overcame his objections, the new national security adviser seized his new position at the top of the official national security decision-making apparatus, shaping the staff with his own appointees and leaning into shaping policy.

Gaps opened almost immediately between Bolton and Trump based on the president’s freewheeling style that included making policy via Twitter or in impromptu remarks.

By the summer, Trump was saying that “we’ll have to see” whether Washington would recognize the borders of Ukraine since Russia’s invasion in Crimea and the eastern border.

Bolton was then asked whether the administration actually would concede the claims made by Russia based on its use of force.

The national security adviser, no fan of Moscow, sought to draw a distinction between Trump’s musings and what might be produced by the National Security Council or the Defense Department.

“That’s not the position of the United States,” Bolton said.