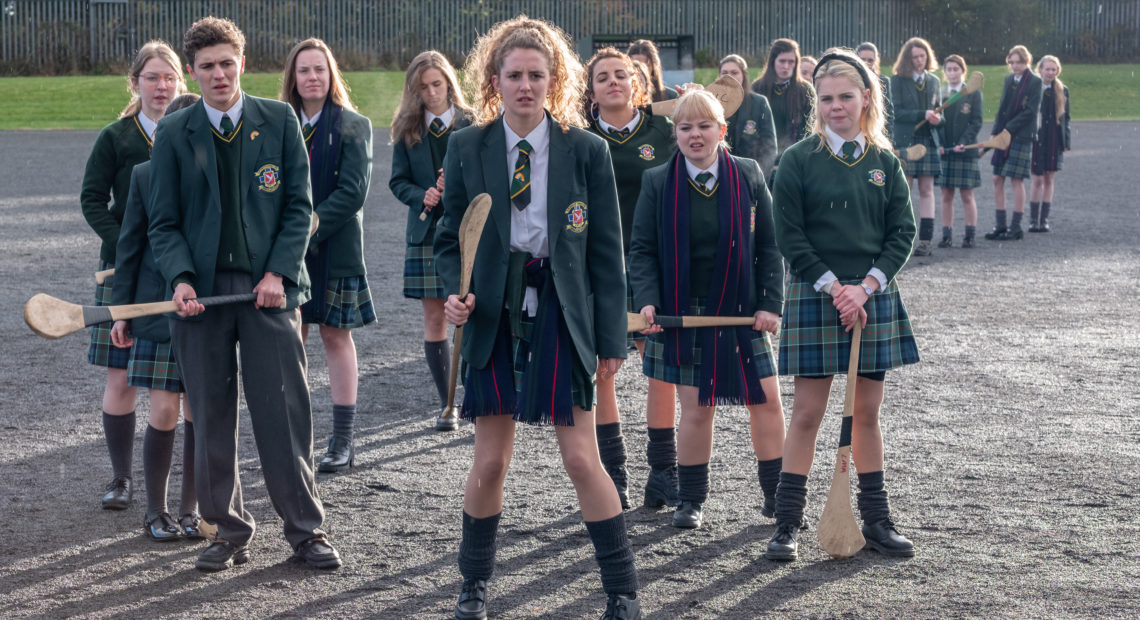 When Protestant loyalists waving British flags march in the Northern Irish city of Londonderry, Donna McCluskey and other community workers stage what she calls a “diversionary festival.”

“In the past, young people used to riot,” she says, standing in Free Derry Corner, where the buildings are covered in murals lionizing Irish nationalists. But this year, there wasn’t as much trouble. “Maybe they were all watching reruns of Derry Girls,” she jokes. “At our house I think we watched every episode three times.”

Derry Girls, a critically acclaimed comedy first broadcast on Britain’s Channel 4 and now streaming on Netflix, was the most watched series in Northern Ireland in 2018. The show follows five teenagers in a Catholic school during the 1990s, when Northern Ireland was gripped by sectarian violence between Catholics and Protestants known as The Troubles. (Whether you call the city Derry or Londonderry depends on your politics.)

The conflict has been on people’s minds a lot recently, as Britain’s messy exit from the European Union has revived talk of a hard border in Ireland, which was dismantled after the 1998 Good Friday Agreement. The history is dark and painful and dominates the way Northern Ireland is portrayed onstage, on-screen and in books. The Orwell Prizes in fiction and political writing this year went to Troubles-themed books.

In Derry Girls, the conflict is in the background. As Erin Quinn (Saoirse-Monica Jackson) says in one episode, while describing her own hilariously self-affected essay writing: “It’s about The Troubles in a political sense but also about my own troubles in a personal sense.”

The series creator and writer, Lisa McGee, grew up in the Irish border city and based the show on her own life.

Two 31-year-old moms I met on the street, Rachel Mullan and Tina Burke, call themselves “the grown-up Derry Girls.” They say the series accurately portrays what life was like here for teens and tweens.

“We knew The Troubles were there, but kids still had to go to school and just get on with it,” Mullan says.

“It doesn’t ignore that people lost their lives,” Burke adds, “but it shows the world that Derry is much more than this conflict.”

Burke and Mullan know all the main characters: Erin is imperious and has dreams of becoming a famous writer; Clare (Nicola Coughlan) is studious and smart; Orla (Louisa Harland) is spaced out and really into step aerobics; Michelle (Jamie-Lynn O’Donnell), fearless and uncensored, accidentally sets a house on fire with flaming shots of Sambuca; and James (Dylan Llewellyn) is Michelle’s English cousin who gets stuck at an all-girls school. He seems to be the butt of every joke.

Based on an entirely unscientific poll I conducted in the city, Michelle seems to be the favorite Derry Girl. Even the old IRA guys drinking Guinness at the Bogside Inn think “she’s some craic just.” (Translation: She’s a good laugh.)

Rachel McCrade, a 29-year-old musician sitting next to the Irish nationalist grandfathers with her own Guinness, also chimes in for Michelle. “She’s very much like myself growing up,” she says. “Her attitude, her character, it’s very typical of a Derry Girl. Everybody’s got a Michelle in their circle of friends.”

Outside, three teenagers in matching shoes walk down a steep hill. Enya and Abbie Canning and Chloe Doyle are 14 and also Michelle fans. “We’re all Michelles,” Chloe says. “We walk about smoking and talking salty.”

They giggle as a group of teenage boys walks by carrying what appear to be wooden crates. They’re preparing for bonfires, which both Catholics and Protestants burn to commemorate their own history. Community workers can usually distract kids during the day but not at night. A few dozen teenagers threw gas bombs and stones last month.

Chloe explains that she grew up hearing her parents and grandparents talk about The Troubles but Derry Girls helped her put it in context. The past still feels present here.

“It happened again. It was more or less The Troubles, where a girl got shot in the head,” Chloe says. “That was at the end of my street. My grandfather was standing right next to her.”

She’s referring to Lyra McKee, a 29-year-old journalist killed during rioting in the Creggan area of Derry last April. A group called the New IRA claimed responsibility and apologized to her family. The reaction to her death was outrage, a sign that most people here want to stick by the 1998 Good Friday Agreement ending the sectarian fighting. On the monument marking Free Derry Corner, someone spray-painted “Not in our name: RIP Lyra.”

“The Free Derry Corner was iconic during the Troubles, when the British military were told not to come in,” says John Cooley, who grew up in the city and raised his own Derry Girls here. “The murals there are the most photographed walls in Derry. But we do not want to go down that road again, even if a certain tiny, fringe element wants to take us there.”

Besides, he says, “we have a new mural.”

A mural of the Derry Girls is painted on the side of Badgers, the bar and restaurant Cooley manages.

“That mural out there, I’m glad to say, is the new mural of Northern Ireland,” he says. “I see people photographing it every day.”

Emma Doutreligne, a 20-year-old student from the French village of Fontenay-le-Comte, poses in front of it — she’s on vacation with her parents and brother and made them take a detour to see where Derry Girls was set.

“I binge-watched the show back home,” she says. “I laugh at every episode.”

But what she says she really likes is that despite the fact a sectarian conflict is raging in the background, the Derry Girls “don’t even care about this war background, they just live their lives as teenagers; they care about boys and girls and about money and schools and stuff like that.”

Inside Badgers, Gilly Campbell, who works in the arts and culture sector in Belfast, is sipping sodas with her 7-year-old daughter, Sally McKinney.

“We watch Derry Girls together,” Sally says. “We never miss it because I love it! Especially Michelle. But I can’t tell you my favorite lines because she always talks so salty.”