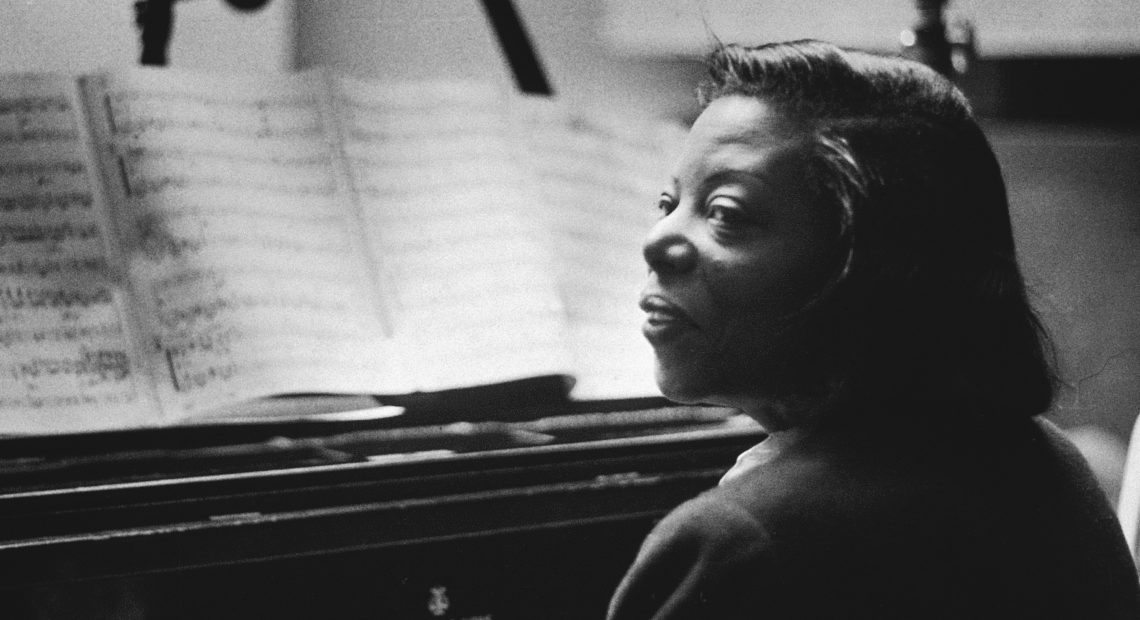 Turning The Tables With Mary Lou Williams, Missionary Of Jazz

NOTE: This story is part of NPR’s ongoing “Turning The Tables” series about women the lives and legacies of women who helped shaped modern music. See the full series here.

Maybe she realized this at age six, when she started venturing to her white neighbors’ homes to play piano for them. As Williams later recalled to the journalist John Wilson for the Jazz Oral History Project at the Rutgers Institute of Jazz Studies, she got the neighbors to stop throwing bricks into her family’s house by giving them private concerts.

Williams’ mother didn’t know why the neighbors had stopped terrorizing her family until young Mary Lou broke her arm. Her concerts suddenly stopped, and the neighbors came by to ask where the music had gone. 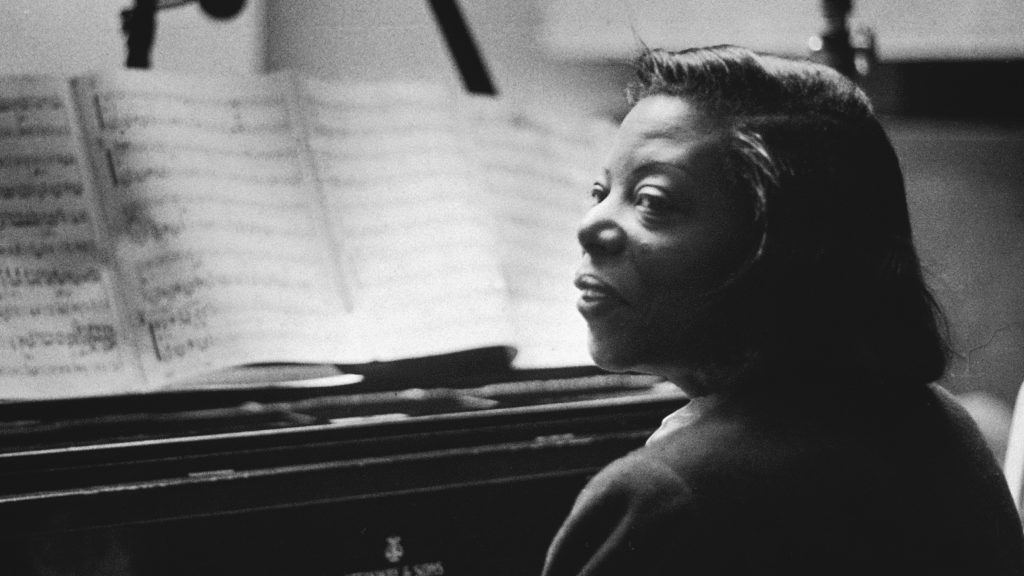 Jazz helped Mary Lou Williams stay alive — but after several draining decades as a musician, she quit the scene. When she returned, she claimed her true power as one of jazz’s fiercest advocates.
CREDIT: Metronome/Getty Images

By 1925, at just 15 years old, Williams was a “full-time working musician,” says Tammy Kernodle, professor at Miami University of Ohio and author of Soul on Soul: The Life and Music of Mary Lou Williams. By the middle of the 20th century, Williams had solidified her status as a jazz great. She helped develop the Kansas City swing sound of the 1930s. And in the 1940s, she mentored some of bebop’s most famous innovators like Charlie Parker, Dizzy Gillespie and Thelonious Monk.

Jazz helped Williams stay alive: It had kept the racist neighbors at bay, helped pay her family’s bills, taken her all over the country and across the Atlantic to Europe. But jazz, it seemed, was also killing her.

By 1954, Williams was physically and emotionally exhausted, and she quit the scene. As Wilson wrote in his 1981 New York Times obituary for Williams, she stood up from the piano during a Paris performance and refused to perform again for three years.

During her break from performance, Williams went through a period of intense reflection about the meaning of her life’s work. When she returned in 1957, she claimed her true power as one of jazz’s fiercest advocates, making spiritual, political music — and with her clarified purpose, she pushed the genre to new places.

In her Rutgers oral history interview, Williams was vague about what drove her extended retreat from public performance.

“I didn’t really stop on my own,” she said. “I just — something carried me away. I began praying, and I never really thought about playing anymore.”

She converted to Catholicism and spent hours a day in mass. She had long been generous with her home in Hamilton Heights, but she took that outreach to a new level, scraping together whatever she could from royalty checks and friends (including Dizzy and Lorraine Gillespie) to take in the poor and help musicians struggling with addiction.

Williams did not have savings to rely on: Despite her decades of jazz prominence, she had experienced little economic stability.

“This was a system that saw her talent but didn’t see her humanity,” says Kernodle. “If you are as talented as Mary Lou Williams was … and you’re continuing to have to work at a level and a rate that doesn’t afford you luxury, let alone rest, there’s a level of frustration that comes there.”

On top of financial hardship — and what Kernodle calls “exploitation” on the part of her white male manager and agents while she was in Europe — Williams also faced emotional struggles.

“The world can destroy me,” she told Wilson during their discussion of her time away from performance. Then, she quickly added, “Not really — I’m a strong woman through being around men. But I can really be bent badly.”

She lived in a context that could bend anyone badly. Jazz was a demanding, male-dominated industry, and Williams had been in it for decades. By the 1950s, Williams was watching the dawning of the civil rights movement. And in 1955, her friend and mentee Charlie Parker died after a long battle with addiction.

But Williams’ intense period of prayer helped. It gave her the strength, she said, “to do further work for God.”

Two priests — Father John Crowley and Father Anthony Woods — played a large role in convincing Williams to return to music, by telling her that creating jazz was her unique way of serving God.

And so Williams composed a series of religious works upon her return. The first was called Black Christ of the Andes — a haunting choral work in honor of a Peruvian saint. In 1975, she performed the first jazz mass at New York City’s St. Patrick’s Cathedral, to a crowd of thousands.

Williams also continued with gigs in the city’s jazz clubs. And during this period, she made records that blurred the distinction between jazz and sacred music. She insisted, despite objections, that the African-American expression of jazz was sacred — that it belonged in the Catholic mass. She also seemed to see performance outside of the Church, and music without explicit religious references, as central to her spiritual mission.

We hear the breadth of her new sound in the 1974 record Zoning. On the cover, she looks up to the sky, hair blowing; it’s rapturous. The record includes the track “Medi II,” which embraces the fast pace popularized during the bop era. There’s “Ghost of Love,” which takes on the solemnity of a hymn. And then there’s “Rosa Mae,” a full-on blues song with a funky base line. (You can also hear a rare vocal performance from Williams — a response to a dare — in her Piano Jazz version of the song.) With Zoning, Williams was saying she owned it all: that as a jazz musician, she was a keeper of the entirety of 20th century American sound.

Williams, Wilson wrote in the Times, once said jazz was “the only true art in the world.” Then, a little shocked at herself, she walked the statement back and said, “Oh, should I say that?”

But she was never apologetic about how essential she thought her music to be.

“Americans don’t realize how important jazz is,” she told the New York Post in 1975. “It’s healing for the soul. It should be played everywhere — in churches, nightclubs, everywhere. We have to use every place we can.”

Later in her life, Williams spent a great deal of energy trying to convey an accurate history of jazz to the American public. She was known to distribute an illustrated “Tree of Jazz,” which drew a direct line, on the trunk of a tree, from the suffering of slavery to the spirituals, ragtime, Kansas City swing and then be-bop. She taught school children about jazz — and she later accepted an appointment at Duke University, which was her last home before she died.

At a time, Kernodle said, when revisionists where trying to whitewash jazz history, Williams was asserting its blackness.

“At the very same time that black studies and women’s studies and gender studies … in the academy are being crafted and constructed, she is constructing some very similar narratives in jazz history,” said Kernodle. “It’s very progressive.”

Jazz has always been about survival; about finding a way to live through oppression and pain. Williams, who did her educational work with a sense of strong urgency, spoke often about wanting to make sure jazz survived.

But first, when she reached what looked like a breaking point, Williams had to make sure she would survive herself.