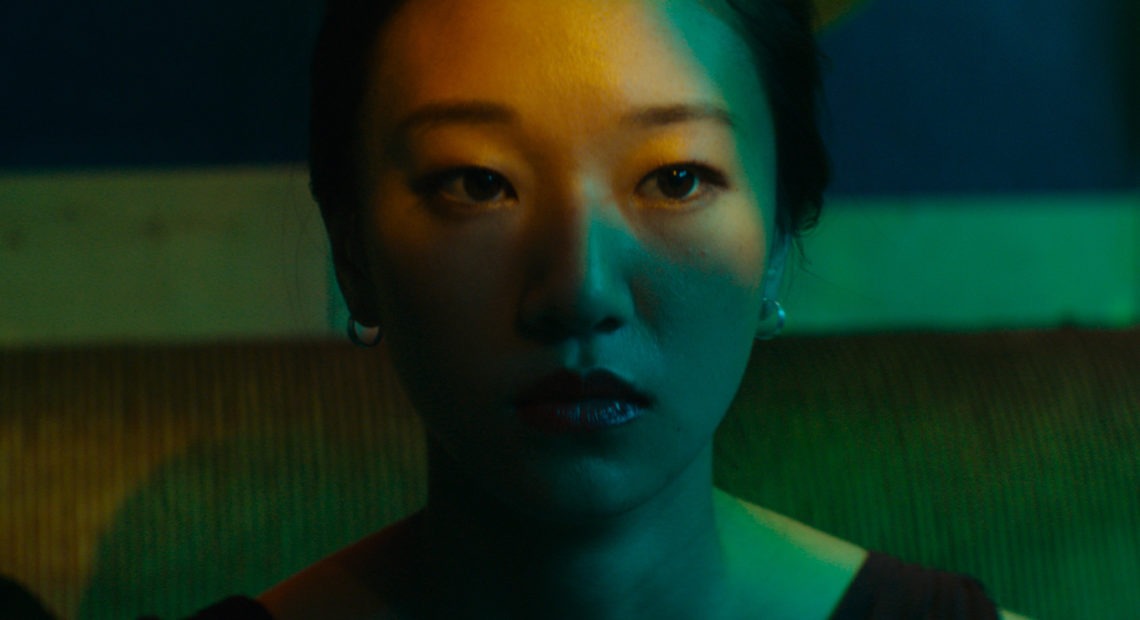 FILM REVIEW: In The Moody ‘Ms. Purple,’ A Karaoke Hostess Lives In The Silence Between Notes

Kasie’s world, we quickly learn, is one in which she is meant to be seen and not heard. The film opens on Kasie as a young girl, standing stoic as her father brushes back her hair, straightens out her colorful pink and gold hanbok, and tells her how beautiful she is in her traditional New Years’ garb. “How can your mother not come and see this beautiful princess?” He asks her. “We have to look good for your mother.”

The next scene is grown-up Kasie, clearly drunk, stumbling home listlessly as the sun rises behind her. She wears a purple hanbok this time, it’s tattered purple ribbons fluttering in the wind. It’s a poignant if unsubtle visual foreshadowing of the story ahead, of a woman burdened by obligation and silent in her misery.

Kasie, played by the excellent Tiffany Chu, works as a doumi, an escort who gets paid to keep the company of men in the darkly lit K-town karaoke bars near where she lives. Her nights begin within a lineup, in which we see her hoping to be chosen among a dozen other girls with equally beautiful faces and little black dresses. The men doing the choosing are mouthy and handsy at best, vitriolic and physically violent at worst. Her nights end with booze and drugs and dancing to wash it all away. Her mornings are spent counting what’s left of her cash and tending to her father’s bed sores. Rinse and repeat.

And then one morning, Kasie’s bad becomes worse when her father’s live-in nurse, urging her to put her father in hospice, quits without warning. Left with no one else to turn to, she calls Carey (Teddy Lee), her aimless, absentee brother, to care for Dad (James Kang) while she works.

The sibling story that then unfolds in Ms. Purple is a continuation of sorts for Chon, whose 2017 film Gook explored the relationship between two Korean American brothers on the first day of the 1992 Rodney King riots. The film, shot in grainy black-and-white and lauded for its unflinching portrayal of race relations in ’90s LA, scored Chon a Sundance Audience Award for Best of Next. This newest endeavor is just as ambitious as Gook in its portrayal of the Asian American family outside of the “model minority” stereotype, and is more focused, if not always balanced.

The naturalistic scripting throughout Ms. Purple often serves to heighten Kasie and Carey’s alienation, but the film’s emotional impact is loudest in its quiet moments: in Kasie’s silent tears as her brother asks her about why she gave up piano, in the crackling static between what they don’t say to each other on the phone. The result is a deeply visceral story about siblings finding common ground after surviving abandonment, and also poverty, and also cruelty—and about the unique ways they hurt and help each other the way only siblings can.

The greatest strength of Ms. Purple is also its weakness — Kasie is so real, her fragility so tangible, that the rest of the characters feel a bit flat by comparison. Teddy Lee’s depiction of Carey is admirable. He’s clearly hurting, clearly troubled, but generally so useless throughout the film it’s hard to find sympathy for him when he lashes out. The bombastic machismo of Kasie’s boyfriend Tony (Ronnie Kim) rouses the desired effect, but is so two-dimensional it can be hard to stomach. Octavio (Octavio Pizano), playing a valet love interest, steals the few scenes he’s in, but we don’t spend enough time with him to really care. Then there’s ailing father Young-Il, the still-living specter around which the central question of the film revolves. Every time you hear him, you feel his pain, but you may not get enough of him soon enough or often enough to feel Kasie’s staunch commitment to him is justified.

Cinematographer Ante Cheng, who also collaborated with Chon on Gook, works skillfully with saturated, mood-matching color and sweeping shots of the palm-treed L.A. skyline to create a vivid world, but can sometimes lean too heavily towards the melodramatic. We could do with one or two less angst-filled slow-motion actions shots ala the cheesy music videos you might see at any Korean karaoke bar — but the film is grounded in an emotional reality so palpable that the sometimes heavy-handed visual metaphors throughout are easy to forgive.

Where Chon’s Gook is cluttered with the chaos of the outside world, Ms. Purple is very much an internal journey. Plenty happens throughout the course of the film — beer bottles broken over heads, boyfriends lost and gained, comatose fathers traipsed through downtown LA on a roller bed — but more than anything Ms. Purple is a case study in familial sadness, in living through brokenness. And together, these various shades of misery swirl together to create a beautiful portrait of a fractured but resilient family.